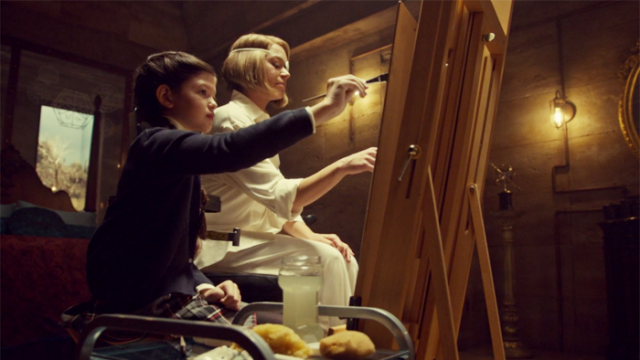 Did you get my message?

Casey: One interesting yet heartbreaking fun fact we learned in this episode was that Charlotte, despite being only a child, already has the same sickness plaguing Cosima. This may seem like an impossible thing given that all the other clones that we know experienced the sickness didn’t begin showing symptoms until their late 20s. Well, this actually isn’t that unexpected, given that we also learned this week that Charlotte was cloned from Rachel.

When cloning an organism using the standard practice of Somatic Cell Nuclear Transfer, the nucleus (which contains the bulk of the genetic material of the cell) of a normal body cell (usually a skin cell) is transferred into a donor egg cell, resulting in an egg with the exact same genome as the original that will develop into a new organism. This was similar to how the famous Dolly the Sheep was cloned in the 1990s, using the nucleus of an adult sheep’s mammary tissue.

Now because the nucleus of the clone comes from an adult, the DNA has what are known as aging signatures representing the age if the original organism. These aging signatures occur as the ends of chromosomes (known as telomeres) are shortened over time and the DNA repair mechanisms of the cell begin to function improperly. In the case of Dolly, she died young because of her aged cells and their inability to maintain proper cell division that would be expected of a sheep of Dolly’s actual age.

Charlotte was cloned from Rachel’s cells sometime during Rachel’s early twenties. Therefore, Charlotte’s cells most likely maintain the aging signature of Rachel’s cells, making her DNA roughly 20 years older than she actually is. This could explain why Charlotte has begun to cough up blood at a similar time as the first generation clones, because her DNA is of the same age.

Nina: You may be wondering why Charlotte has these symptoms when we’ve never seen them in Rachel. Rachel does have the defect that causes the clone disease in the other Leda clones, although the only indication so far is her infertility (same with Alison). Most likely Rachel just hasn’t shown disease symptoms yet. But it’s also possible that the clone disease has incomplete penetrance. Penetrance, in genetics, is the proportion of people with a gene (genotype) who also express the trait associated with that gene (phenotype). A condition with complete penetrance will show up in 100% of the people with that gene. A good example of a condition with incomplete penetrance is familial breast cancer caused by a BRCA1 gene mutation: having that mutation greatly increases risk of developing breast cancer to about 80% during the affected person’s lifetime, but there’s a smaller chance that they’ll never develop the disease at all.

Nina: As for this week’s Neolution Worm update, MK’s “maggotbot” description wasn’t just whimsy. Cosima and Scott wasted no time performing an ultrasound of Sarah’s cheek to reveal that the Worm is in fact an organic-cybernetic hybrid and that it’s latched onto Sarah’s maxillary artery. Sarah’s new hacker contact Dizzy suggested that this location was chosen for its proximity to the brain, and that really is the only good reason for having it in the cheek (picture me, horrified at the idea of accidentally biting into the Worm, because in that location there is more than just a reasonable chance that could happen): the maxillary artery is a major artery and its branches not only feed the face, jaw, and neck, but they also enter into the skull and supply the meninges around the brain. 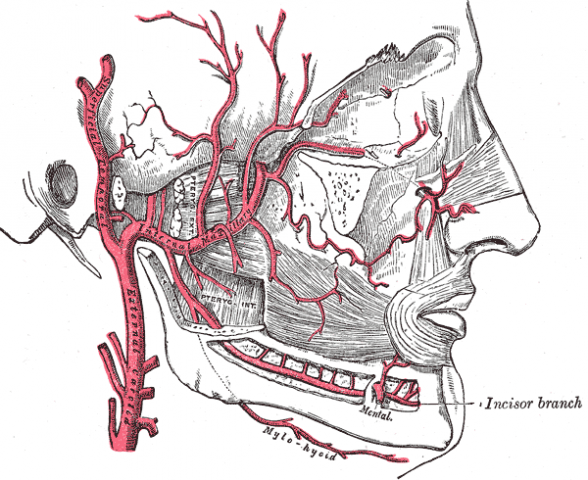 The maxillary artery: there’s more than a passing resemblance to the “tendrils” we saw in Dizzy’s video.

Meanwhile, Alison and Donnie unearth a very decomposed Aldous Leekie from their garage to supply Cosima with a Worm to study. In Leekie’s cheek, the Worm appears to be encased in what Alison describes as some sort of “polyp”. In our last recap, we mentioned that it’s possible that the maggot is just one form of the parasite. Could this polyp actually be a pupa? It’s possible that when Cosima and Scott open it up, they might find an adult form.

Dizzy’s sources also led Sarah to a dentist’s office specializing in implants, and it turned out that Beth had also uncovered this location while she was alive. Hoping to get the Worm safely removed from her face(as one would and should), Sarah instead wound up trapped with a sharp probe in her mouth, not to mention a cheek retractor that looked like a torture device. 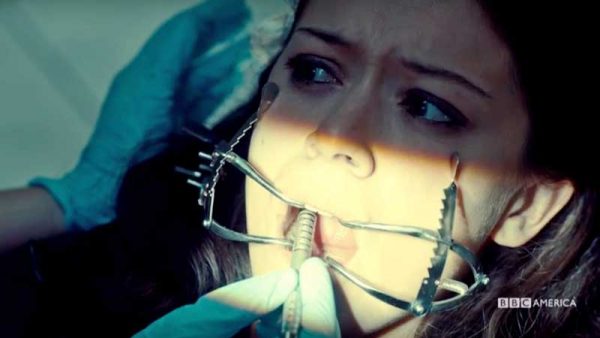 Turns out that if punctured, the Worm releases tetrodotoxin into the artery. Tetrodotoxin is a powerful neurotoxin—you may know it as the poison found in pufferfish (and it’s the reason why people have died eating improperly prepared fugu). Tetrodotoxin works by disrupting the nerves’ ability to transmit signals. Muscles become paralyzed, and death is usually caused by paralysis of the diaphragm and intercostal muscles: the muscles that you need to breathe. If you’ve been poisoned thanks to eating fugu, this can take anywhere from 20 minutes to a full day. The Worm spills the toxin right into the bloodstream, though, so this would happen way faster, which is in line with what we’ve seen in Dizzy’s video.

Oh, and there’s no antidote.

Casey: This episode was jam packed full of crazy science, from rotting heads to bionic eyes to another sick clone. We can’t wait to see what’s in store for the next episode, because Orphan Black is definitely delivering the science this season.

Nina Nesseth is a professional science communicator, writer, and serial tea-drinker. She’s happiest when science-ing at people (yes, that’s “science” as a verb). You can find her on Twitter@cestmabiologie.