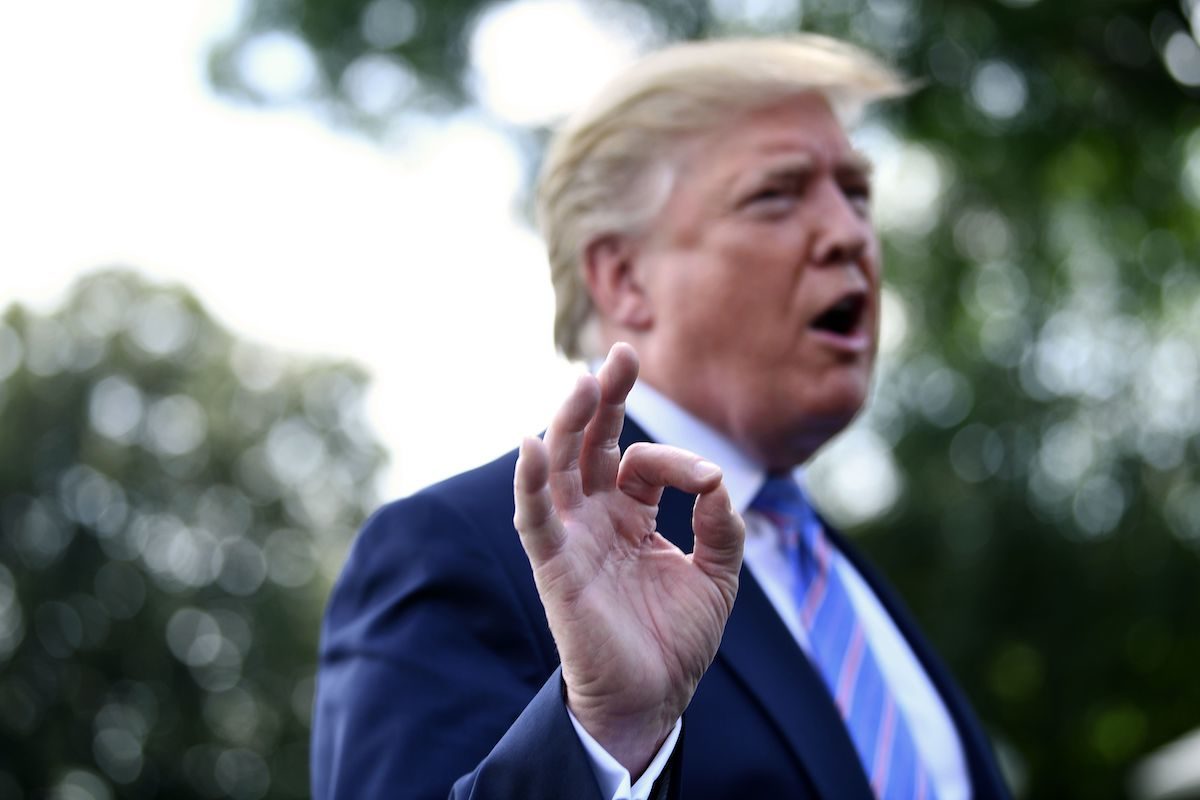 Yesterday, Donald Trump gave a stilted, forced speech tepidly condemning a host of issues he saw as being to blame for this weekend’s mass shootings, from white supremacy (agreed) to video games (WTF). He called for bipartisan cooperation in brainstorming “all ideas that will actually work,” apparently ignoring the two bills that Mitch McConnell has been stalling for the last six months after they passed House votes in February.

Yes, he said the word “bipartisan” in his speech, but he’s also spent his entire presidency vilifying Democrats, calling them enemies, refusing to cooperate with them, and demanding they give nothing but blind support to his immigration policies. Remember when he held the government hostage until Democrats would agree to fund his racist border wall? He appeared to be doing something similar yesterday, as he suggested “marrying” gun control with immigration reform.

And yet this is the headline the New York Times decided to go with this morning:

Not sure “TRUMP URGES UNITY VS. RACISM” is how I would have framed the story. pic.twitter.com/quOibXsp32

“Trump Urges Unity vs. Racism.” What a take.

Over the weekend, Beto O’Rourke gave a surprisingly (and appropriately) candid response to a reporter asking if there was anything Trump could do to make things better in regard to these shootings. “What do you think? You know the shit he’s been saying. He’s been calling Mexican immigrants rapists and criminals. I don’t know, like, members of the press, what the fuck?” he said, urging reporters to “connect the dots” between Trump’s repeated racist attacks on immigrants and asylum seekers (not to mention WOC in Congress) and the increased violence against those communities.

This is exactly what he was talking about.

A lot of people are really upset over the choice to frame this story in this way. Many are threatening to cancel or say they have canceled their NYT subscriptions and #CancelNYT is trending on Twitter, although by now, that hashtag has mostly been taken over by conservatives mocking liberal snowflakes for being overly offended by a single headline.

But of course, it’s not just one headline. This is just one incredibly notable example of how the paper consistently whitewashes the news, especially when it comes to the relationship between Donald Trump and alt-right violence and white supremacy.

Last year someone from the NYT reached out for my opinion in the wake of that neo-nazi puff piece backlash. I said you’re becoming a PR firm for Trump and the alt-right. They didn’t wanna hear that. Maybe they’ll listen now.#CancelNYT

Why is the New York Times so eager to soften Trump’s image and to deny the reality of racism in America?

I know this isn’t the main criticism, but among the many bad things about this framing: “unity” is not the opposite of “racism.” White nationalists are *very unified.* https://t.co/I93AQEOuP5

The Times, it seems, saw the outrage and changed the headline for later editions of today’s paper. The paper’s executive editor Dean Baquet admitted the original was “a bad headline,” blaming the error on a rush to make deadline.

The new headline is “Assailing Hate but Not Guns,” which honestly, isn’t that much better.

FWIW (certainly better to do this than not IMO) they changed their headline between the 1st and 2nd print edition. pic.twitter.com/DOSAMFbvq0

As for Trump, how is that whole “unity” thing going today? Well, he spent the early morning hours tweeting quotes from Fox & Friends, attacking Democrats and complimenting himself.

“It’s political season and the election is around the corner. They want to continue to push that racist narrative.” @ainsleyearhardt @foxandfriends And I am the least racist person. Black, Hispanic and Asian Unemployment is the lowest (BEST) in the history of the United States!

Gee, I wonder why more of us didn’t take his call for bipartisan unity at face value yesterday.