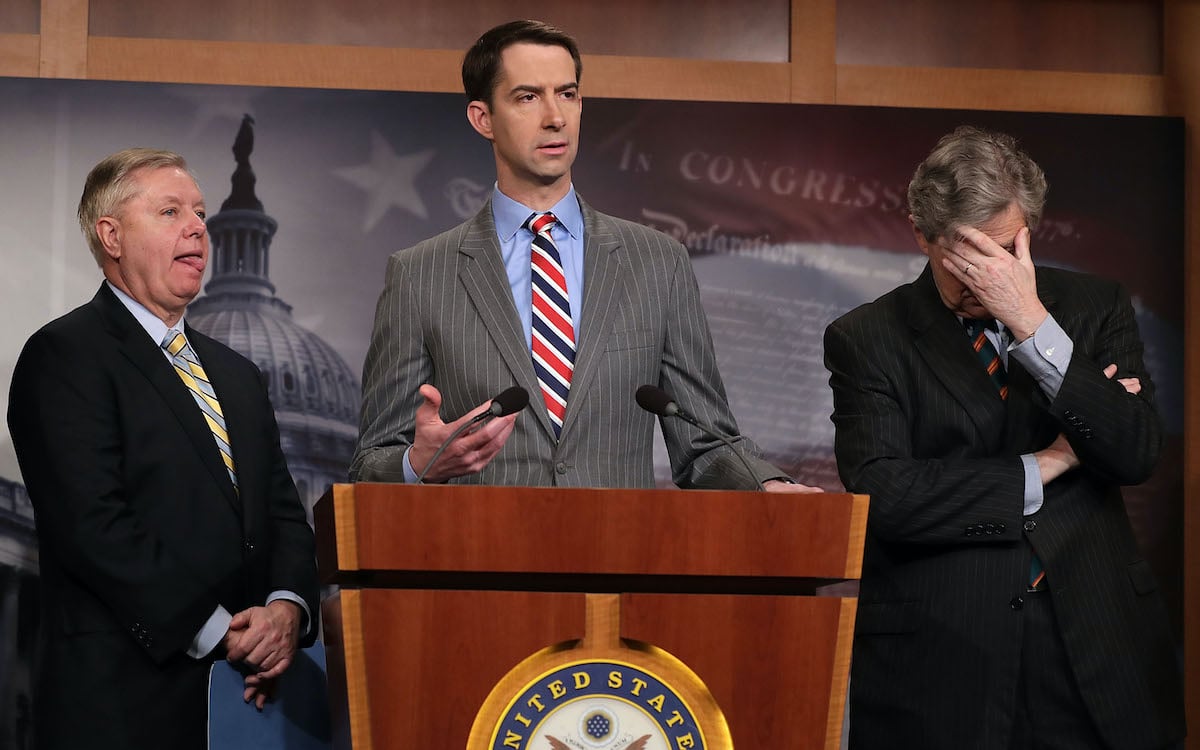 Earlier this week, the New York Times made the decision to publish a despicable op-ed by Republican senator Tom Cotton, in which he called for use of the Insurrection Act to quell protests. The federal government needs to “send in the troops,” he said, to control protesters whom he baselessly and insultingly claims are just “nihilist criminals” with no interest in the murder of George Floyd.

It was an absolutely shameful essay that should never have been published. A large number of New York Times employees, both within the op-ed department and elsewhere, condemned it for putting Black employees in danger.

Today @nytimes basically told all of their Black writers and staff members that their lives don’t matter.

Running this puts black @nytimes writers, editors and other staff in danger. pic.twitter.com/wCy4LMov5x

Running this put Black lives, including Black @nytimes staff in danger. Being a Black writer at a predominately white organization is hard enough. This is one glaring example of exactly why. Do better. pic.twitter.com/Oc6S6ClJAn

Running this put Black lives, including Black @nytimes staff in danger. Being a Black writer at a predominately white organization is hard enough. This is one glaring example of exactly why. Do better. pic.twitter.com/Oc6S6ClJAn

The op-ed also sparked a mass virtual walkout within the company.

Yesterday two dozen of us who make @nytimes publishing tools called out sick in solidarity with our Black colleagues & in protest of the Cotton op-ed. I was harassed on Twitter all day for it.

Guess what? Today there’s a virtual walkout of 300+ of us who work outside editorial. pic.twitter.com/Tv6kgaSaoK

Today, the Times expressed some regret and offered explanations for the op-ed. They weren’t great. First of all, James Bennet, the editor in charge of the opinion section, reportedly told employees that he hadn’t even read the piece before it went to print. A spokesperson said the editorial process for the essay was “rushed” and that that’s why the piece “did not meet our standards.”

The Times’s publisher, A. G. Sulzberger, said that “Given that this is not the first lapse, the Opinion department will also be taking several initial steps to reduce the likelihood of something like this happening again.”

I think two very basic steps they can take would be to 1) Have the editor read the pieces they publish, and 2) Not “rush” the process of putting up racist, violent material. Oh, and they could also stop courting people like Tom Cotton, who they reportedly reached out to for this essay in the first place.

From New York Times town hall: op-ed team pitched the piece TO Tom Cotton. Not the other way around.

Bennet tried to offer an explanation on Twitter for his decision to run the piece he didn’t read, which got ratioed into oblivion. “Times Opinion owes it to our readers to show them counter-arguments, particularly those made by people in a position to set policy,” he wrote, adding that he knows readers found the article “painful, even dangerous,” and that’s why they published it, because it “requires public scrutiny and debate.”

Except that’s not how this sort of op-ed works. By publishing Cotton’s words, they’re not setting it up for debate or scrutiny. An interview could potentially do that, but by letting him write an op-ed, it gives the impression that his words alone are worth publishing. On top of that, it gives the outlet’s resources—in addition to its clout—to making sure Cotton gives the strongest article possible.

Journalist Virginia Heffernen had a great thread explaining this, writing that “As someone who once had to rewrite…N*wt Gingrich…to make his argument even track, I can testify that it takes a lot of work to make a Gingrich or Cotton sound even just normal. Sound…fit to print.”

The NYT is very much the opposite of a “platform.” As someone who once had to rewrite…N*wt Gingrich…to make his argument even track, I can testify that it takes a lot of work to make a Gingrich or Cotton sound even just normal. Sound…fit to print.

Obviously, a lot of people are going to claim that Cotton deserves to have his opinions published in any outlet at all, and that denying him that opportunity would be censorship. That argument is ridiculous. Any platform is supposed to have standards, both of content and quality. If Cotton is entitled a New York Times op-ed, then you are, too. And me. And literally everyone that has ever submitted a pitch. (Not that Cotton pitched his idea.)

This week the NYT printed Tom Cotton’s fascist screed and turned down my op ed about photo-journalist Linda Tirado’s loss of vision in her left eye to a rubber bullet in Mpls. Just a coincidence, I’m sure .

On that whole promise to do better, I’ll believe it when I see it in print. But multiple NYT employees and former employees have come out to say what the rest of us already definitely assumed: That what makes it to print is a reflection of the work environment as a whole.

I appreciate the NYT listening to its employees, especially people of color, & suggesting the work culture will change. In that spirit, let me tell how many live in fear of the “Bret Stephens Policy.” So many have been contacted by editors because Brett has whined or complained.

He has even emailed the masthead complaining about fellow editors or writers. As a result many walk on eggshells when it comes to him. There’s a simmering resentment and feelings of a very real double standard. People fear for their jobs so remain quiet. This is not just a few 3/

This is such an important time to support journalism. Why does the New York Times’s op-ed department keep making that so difficult?