Did The New York Times Just Get Hacked? Here’s What We Know So Far

All the news that's fit to Http:/1.1 Service Unavailable. 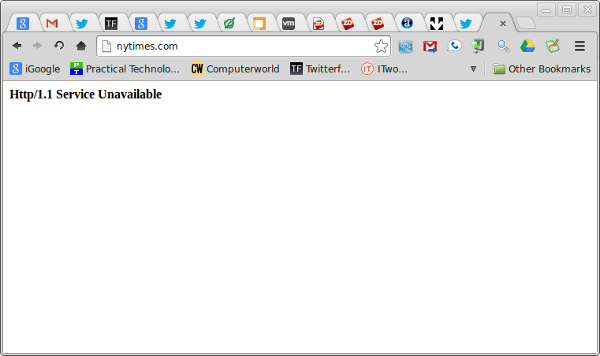 If you tried to access the New York Time website over the past two hours, you might have encountered a very unusual error message saying that the site was down. It’s back up now, but what happened? Hackers happened, an unnamed source at Fox Business claims. Uh oh.

So far no one has claimed responsibility for the outage, though some theorize that it might be related to the 4 months of threats from Chinese computer hackers that the NYT itself reported on in January of this year. So far the paper has not commented on the matter, but Fox Business appears to think it was certainly intentional:

The apparent attack began to block or slow access to the websites beginning around 11:30 a.m. ET. Service appeared to be restored around 1 p.m. ET.

The source, who asked not to be named due to the sensitive nature of the issue, said the newspaper has been huddling with outside security professionals to assess the threat.

Again, the site has just been restored, but currently the last update is still from 11:07 EST.

During the downtime, many of the NYT writers (and a few alums) took to Twitter to make light of their predicament:

Kind of sad that the NYT is making @brianstelter rewrite all of today’s articles on a Tumblr from memory.

Just wander on down to 40th Street and 8th Avenue where I will deliver a dramatic reading of our lede NYT story.

While the NYT is down, outlets that still hope to a̶g̶g̶r̶e̶g̶a̶t̶e̶ steal our key stories can see them on Facebook: https://t.co/r8rgrxKy5M

We’ll be sure to keep you posted as this develops.