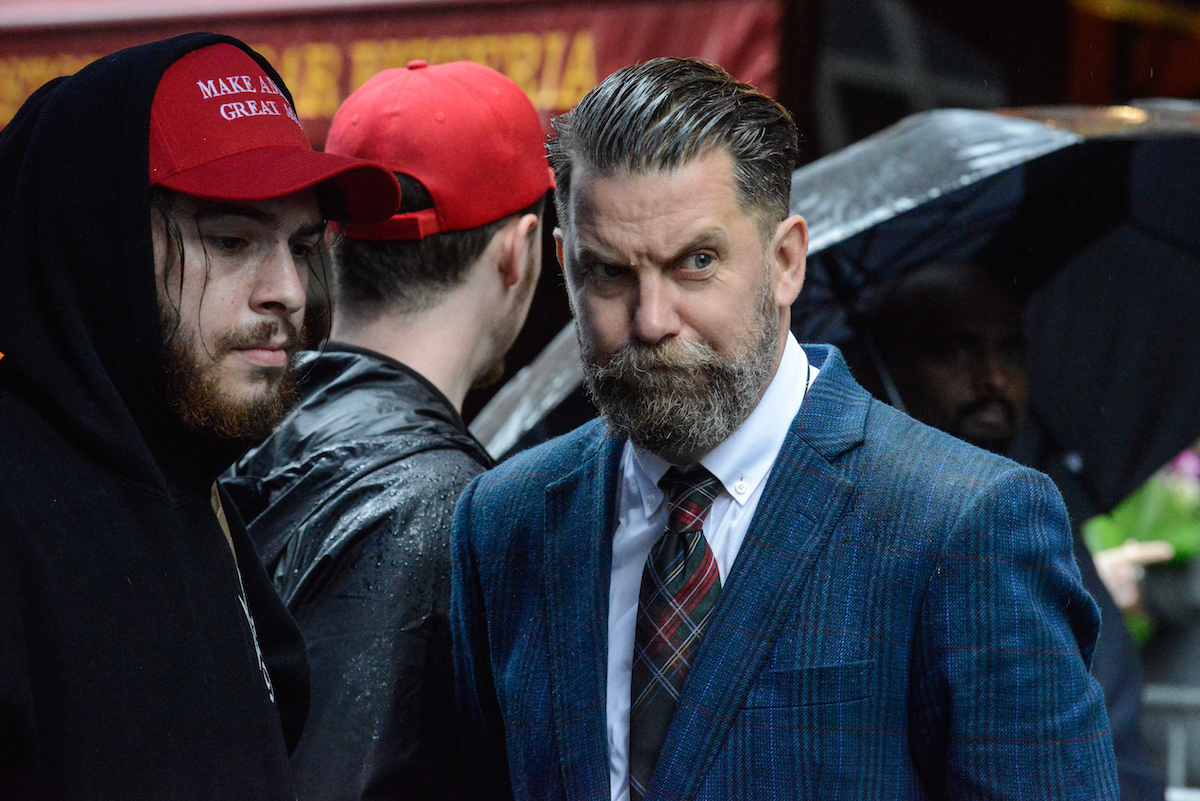 If you saw one of the world’s leading media outlets describe someone as a “hipster” and a “provocateur,” who would you think they were describing? Banksy? Shia LaBeouf? The description sounds innocuous, if mildly insufferable. It sure doesn’t sound like a way you’d describe the leader of an actual gang, let alone a hate group. But that’s how the New York Times described Gavin McInnes, co-founder of the alt-right, misogynistic, racist group the Proud Boys.

It’s not exactly clear what the point of the profile is. In its 1500+ words, it uses mostly McInnes’ own to describe him and his group. By doing so, I suppose the author (Alan Feuer) is able to shirk any responsibility to paint the hate group with the gravity they warrant.

Instead, the article leans into McInnes’ path from Vice co-founder to the man who brandished a plastic sword at Antifa protestors outside a GOP headquarters last week. Of course, even that description heavily downplays what actually happened. Feuer calls the incident a “brawl” between McInnes’ “allies and a crowd of shouting protesters.” What actually happened, and what presumably led the NYT to write this timely profile, was a large group of Proud Boys jumping three protestors, shouting homophobic slurs as they severely beat them. There’s video available. I don’t recommend watching it.

McInnes did show up with a sword, which turned out to be plastic. The NYT’s description of the event makes it sound like something out of a child’s birthday party, not the brutal, bigoted attack it was. The storied newspaper has done much to empathize with Trump voters–with their endless “What do they want” profiles of the white working class voters who came out ahead in the last election yet somehow still need to be studied and mourned–has also worked to normalize violent pro-Trump, anti-everyone else groups like the Proud Boys.

Again, the article goes extremely easy on the group, using their own words to describe themselves, rather than depicting them honestly. Luckily, Twitter was here to do that today, to do the job that we would normally expect the New York Times to do before publishing such a near-fawning profile of a bigot. It’s not hard to find any number of clips of McInnes advocating for and bragging about violence. (Content warning: violence, hate speech, transphobia.)

Please share this video. People need to understand how dangerous Gavin McInnes and his gang the Proud Boys are.

Notify his employers @CRTV and @FoxNews. Maybe we can prevent him from getting someone else killed. pic.twitter.com/zp0VBrmciR

Gavin McInnes In His Own Words: The Proud Boys Engage In Violence Just For Fun pic.twitter.com/LIdm1QqNWe

The article quotes McInnes as saying he is an “Archie Bunker sexist,” as in “I don’t like Gloria Steinem, but I’d take a bullet for Edith.” But his words about even the women in his own life go far beyond playful sitcom sexist banter.

Text from the clip from McInnes’s show: “My fucking 4-year-old doesn’t like Trump. And I go, ‘What? You don’t like Trump?’ And my wife goes (hands up), ‘He didn’t get that from me!’ Cause she knows I’ll beat the shit out of her.”

Another clip of McInnes talking about hitting his wife, who he calls a “drunk Indian”. The woman cackling in the background is Ann Coulter. pic.twitter.com/1uKwpkBfBb

Warning: extreme racist language. (Repeated use of the N-word.)

The New York Times describes McInness’ “egghead glasses, pocket-protector and heavy-drinking, angry-nerd aesthetic,” his “aggressive rhetoric,” and his willingness to “get physical.” They do not call him out for his actual inciting of violence, his celebration of violence, or his racist, misogynistic, homophobic, or transphobic propaganda. It’s hard to imagine the outlet using this sort of framing for any other form of extremism. Yet when it comes to Trump-supporting bigots, men like McInnes and their followers seem to get not just a pass, but full justification.

This is absolutely disgusting bullshit lying framework. How fucking dare you take space in your paper to go out of your way to legitimize racial and misogynist hate and violence. Next you’ll profile a wife-beater by saying “Sometimes a man has to take matters into his own hands”

I’ve been sitting here for five minutes trying to find words to express how hurtful, harmful, and disgusting this profile is, and I can’t summon anything that comes close to the fear and rage I felt as I read this awful piece designed to normalize this evil man.

you think an Antifa leader who oversaw a gang beating on the sidewalks of NYC would be depicted as a “hipster” in pages on NYT?