NYFF Review: Steve Jobs Is a Great Film, Until the Very End 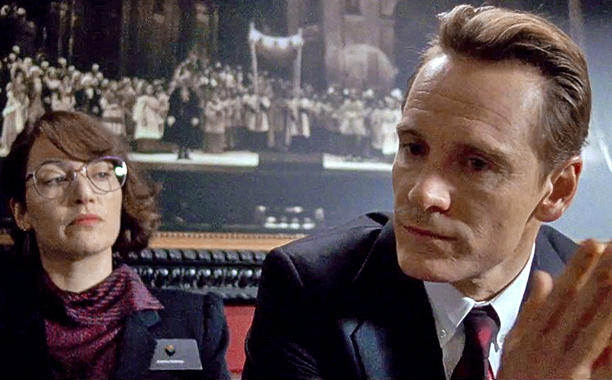 One week before its theatrical release, the New York Film Festival’s centerpiece this year was the highly anticipated Steve Jobs, directed by Danny Boyle and written by Aaron Sorkin. The mix of the two men’s styles initially struck me as having the potential to clash, but for the majority of this interesting approach to the bio-pic genre, their distinct styles actually complement each other, and they succeed at making an intelligent, thrilling, and thought-provoking drama—and then it takes a great big nose dive at the very end.

The interesting thing about a movie like Steve Jobs is the question the filmmakers have to ask themselves from the very beginning: “How much do we assume audiences know about the subject?” Assume the audience knows very little, and the movie will drag. Assume they know too much, and the film will feel like an insider look which requires more research than casual movie goers are willing to put in.

Arguably, Boyle and Sorkin didn’t overextend, but they tended to lean towards the audience knowing more and having to catch up when necessary. After all, of all people to make a movie about, Steve Jobs seems like a person filmmakers can assume we know a lot about. There have been several biographies written, and we’ve already had a bio-pic (the disastrous Jobs starring Ashton Kutcher), a television movie (Pirates of Silicon Valley), and a documentary (this year’s Alex Gibney doc).

That allows the filmmakers to assume a certain amount of background and collective knowledge, but it also creates an obstacle: finding an angle that feels truly original and tells a story about one man that reflects the larger world. And the remarkable thing about Steve Jobs is that it actually does manage to find two specific angles that feel original and relevant. “Was Steve Jobs’ demanding personality a worthy cost for brilliance?” and, “How did the specific way he think about things affect his business and personal life?”

Does brilliance create and breed difficult people, or is that just an excuse we give to people for bad behavior? Is it ultimately selfish on the public’s part to praise people who behave poorly towards those they have personal relationships because the public can benefit from the products they put out into the world? Would the cult of Steve Jobs we see in all three films, cheering and stamping their feet, have been there if they knew the way he treated people?

After all, as Seth Rogen’s character, Steve Wozniak, says in the film, “Being decent and being brilliant are not necessarily mutually exclusive personality traits.” And by the way, Rogen is excellent here, proving as he did in Take This Waltz that he’s a better actor than he’s often been allowed to show. He manages to turn Wozniak into an endearing sacrificial lamb, even in his limited screen time which is always filtered by Jobs’ perspective.

Likewise, Jeff Daniels (as John Scully) has clearly learned how to make Sorkin’s often ridiculous dialogue feel natural while starring on The Newsroom and is arguably a more developed person in this film than in The Martian. Kate Winslet is phenomenal as Joanna Hoffman (no big surprise), the head of marketing who followed Jobs to NEXT, and she overcomes Sorkin’s tendency to turn this independent business woman into too much of an “assistant” role. Although it is frustrating not to see the real role she played at Apple and Next as head of marketing and a brilliant businesswoman, Winslet is excellent in her confrontations and debate with Michael Fassbender’s Jobs and makes Hoffman into a smart, independent, and apparently decent person—something her friend and colleague constantly struggled to do. Oh, and she does a great job with Hoffman’s Polish accent.

As Jobs, Michael Fassbender is pretty fantastic, especially in the first two segments, playing a character with depth rather than an impersonation. Fassbender’s natural blend of intensity and charisma is the perfect fit for Jobs, justifying the desire from his staff to earn his approval and praise. The film plays almost like three short films, connected by montages, each playing out in real-time of the minutes leading up to big announcements.

That real-time approach proves to not only be a smart cinematic device but a smart method for adding a real sense of tension to the film, which when you think about it, is just a lot of talking. Yes, these are three key events in Jobs’ life, but you never forget that they’re just three passing glances. It should also be said that the moments of magical realism are done thoughtfully enough to actually enhance the moments in the narrative, rather than take the audience out of the film. And while they don’t feel like “dramatic” shifts, Boyle’s decision to film in three different cinematic formats (16mm, 35mm, and digital) actually does work to make each sequence stand out from the other and show time moving forward.

But just the way shooting with film and then digital makes for a more dramatic visual shift, there is a noticeable shift in approach to the film in the third segment. Fassbender (who’s solid throughout) begins to give more of an impression of the “Steve Jobs” we know from his public appearances. It’s a slightly less interesting approach and throws things off a bit, especially because all the other actors are still focused on playing characters rather than impressions. The film also goes out of its way to “redeem” Jobs in a way that feels corny and a little too “Hollywood” for an otherwise edgy and realistic film. It hurts dramatically, especially because this section of the film has moments with his business associates that work better (especially his confrontation with Winslet and Rogen) and hit emotional moments better than the overtly sentimental one they end with.

The big issue the film has to contend with is Jobs’ connection to his daughter, Lisa, and her mother/his former lover Chrisann (Katherine Waterson). The larger truths that surround this relationship (denying his DNA tests) is a fascinating problem to witness that affected every area of Jobs’ life; he was such a big thinker, and yet he had the ability to completely distort absolute facts.

This led to him making demands, many of which were called impossible, and many of which ultimately proved impossible. He claimed 28% of the male population could be Lisa’s father, a statistic that was proven again and again to be wrong (he was 94.1% likely to be her father according to DNA). Jobs’ demands got results from those wanting his approval, but they also led to deception of the public and discouragement of employees. Jobs was a great hype man, literally creating the Apple culture … but then again, so were a lot of cult leaders. Watching the cheers from people as excited to see Jobs as they were to see the next product actually is unnerving. The film leaves us questioning: “Was Steve Jobs a visionary because he lacked personal skills and thought so entirely differently from the rest of the population? AND was Steve Jobs a visionary, a leader, or nothing more than a modern day, real-life Don Draper?”

Those are interesting questions to make a movie about and leave audiences asking themselves. And because of that, there was no need to ultimately redeem Jobs, especially in such a melodramatic manner. Jobs’ behavior was often deplorable and making him into such as clear example of “the hero” at the end, suggests a moral judgement that wasn’t necessary. Jobs has already become a legend and icon in his time; he doesn’t also need to be a Great Guy and American Hero. But if Sorkin (and the ending really feeling like Sorkin at his worst), had to add this to the film, I wish he had chosen a different approach that had a bit more subtly. It simply isn’t necessary and ultimately hurts what is otherwise an exceptional film.