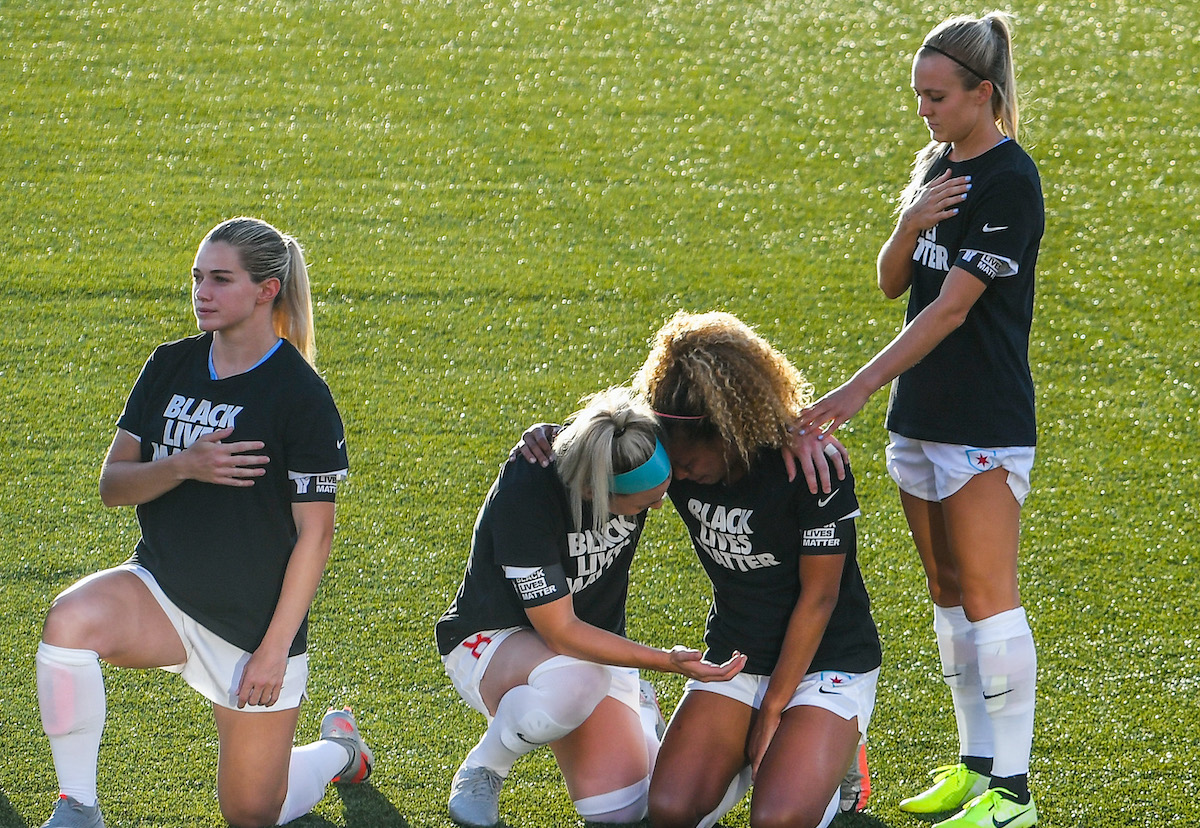 The National Women’s Soccer League made its return this past weekend, with two games on Saturday. Prior to the first, every player of both the North Carolina Courage and the Portland Thorns took part in a coordinated protest, taking a knee during the national anthem while wearing Black Lives Matter t-shirts and armbands.

That evening, most but not all players on the Chicago Red Stars and the Washington Spirit also knelt. There was a particularly emotional moment between Red Stars players Casey Short and Julie Ertz.

An emotional moment for Casey Short and Julie Ertz during the national anthem.#CHIvWAS | #NWSL pic.twitter.com/1SExbhaKvL

Short and Ertz’s teammate Rachel Hill, however, chose to stand, putting her hand on Short’s shoulder as she cried. After getting a lot of attention online, in the form of both criticism and praise, Hill has released a statement explaining her decision.

I chose to stand because of what the flag inherently means to my military family members and me, but I 100% percent support my peers. Symbolically, I tried to show this with the placement of my hand on Casey’s shoulder and bowing my head. I struggled, but felt that these actions showed my truth, and in the end I wanted to remain true to myself.

If this wasn’t clear, let my words and further actions be. I support the black lives matter movement wholeheartedly. I also support and will do my part in fighting against the current inequality. As a white athlete, it is way past due for me to be diligently anti-racist.

There’s a lot here I don’t love, starting with way she talks about using Casey Short, who is Black, as almost a prop to “symbolically” show her support. I definitely don’t love that she’s pushing the narrative that this form of protest has anything to do with the military. It doesn’t, but that’s a rightwing talking point that has, unfortunately, been all too successful in derailing the original conversation of police violence and systematic oppression.

(As Yahoo! Sports notes, “It’s also worth mentioning that the act of protesting injustice by kneeling during the national anthem originated when a former Green Beret advised Colin Kaepernick that kneeling would be more respectful to the military than sitting.”)

But as a white fan and supporter of this movement, Hill’s explanation is not for me to accept or refuse. And she has gotten public support from a number of her teammates, including Casey Short and Julie Ertz, who put out a joint statement in which they call Hill “unapologetically authentic.”

What’s really upsetting is how quickly Hill’s image was co-opted by those opposed to Black Lives Matter protests. Conservative figures, along with those known in the soccer world, retweeted the picture of her standing with messages praising her “courage.” Many of those are the same people who attacked Colin Kaepernick for choosing to kneel in the first place, as if it really takes more courage to resist a movement than to start one—as if it’s harder to be the only one dedicated to maintaining the status quo than to be the lone voice speaking out against it in the first place.

I wrote a few more words about today… pic.twitter.com/1jDGXEEK33

It’s also unfortunate that once again, the loudest narrative around women’s soccer is about everything but the sport itself. Last season, discussion of unfair pay and the resulting lawsuit dominated the general conversation around the NWSL. (And before that, when the US Women’s National Team was kicking butt at the Olympics, Megan Rapino’s pseudo-feud with Donald Trump took center stage.)

This season’s opening game was the most-watched match in the league’s history, so it’s a shame that so much attention is on what happened before that match actually started. (Although, to be fair, on the flip side of that, I would imagine that the attention on these teams’ commitment to social progress is a big part of what has been drawing new fans in over the last year. Come for the social commentary, stay for the dazzling skill.)

It is true that Hill’s refusal to kneel with her teammates makes her an outlier. But that hasn’t always been the case. After Megan Rapinoe took a knee in 2016 to support Colin Kaepernick, U.S. Soccer instituted a policy mandating players “stand respectfully” for the National Anthem—not that that stopped Rapinoe and others from protesting.

I’d missed this image of the Reign & FCKC players who sat out the anthem over the weekend. Really iconic snap, IMO, by ISI’s Jane Gershovich pic.twitter.com/eA8lPfMbOZ

They’ve since reversed that policy and have now added the option for players to stay in the locker room during the anthem.

“[We’re] going to continue to play the national anthem, but with even more flexibility, and support each player’s right to express their individual views, or not,” NWSL Commissioner Lisa Baird said in a statement. “The NWSL stands behind every player, official and staff member. Kneel on the field. Stand with your hand over your heart. Honor your feelings in the privacy of the locker room or at midfield.”

All NWSL matches are currently being played in Utah to an empty stadium and streamed on CBS All Access. You can see the full schedule here.