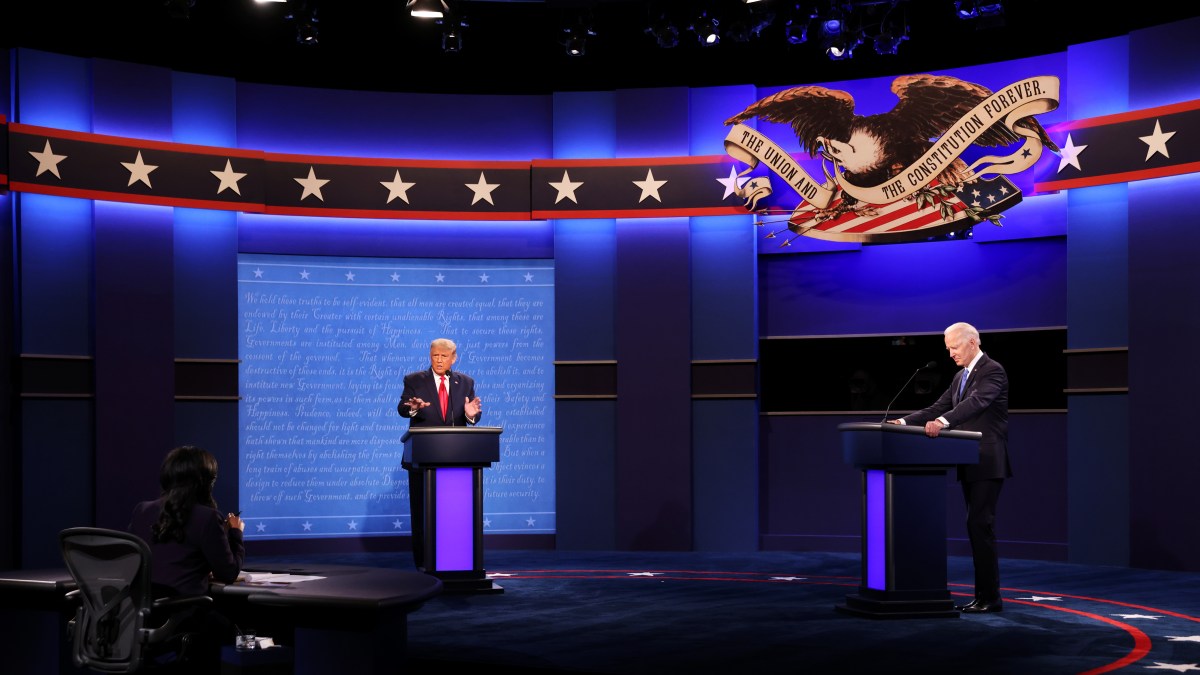 Finally, the Presidential debates are over and the final one was something. Thanks to new rules established after the last mess, the candidates were not allowed to speak while the other one answered the question the first time. There were far fewer interruptions and without the interruptions, we could sure hear the lies better.

I’m pre-fact-checking Trump’s next statement as a lie.

First, he said he was cured of COVID, after falsifying the progress the US has made against the virus, and also downplaying his own failures. He also lied about when a vaccine will be available, saying it would be out in weeks and contradicting his own experts when it. He lied about Joe Biden and foreign interference. He lied about … well, just everything. Trying to face check the President was exhausting and also easy. If he was talking, he was lying.

From a lying perspective, Trump is even worse tonight than in the first debate.

President Trump repeatedly excused President Vladimir Putin’s behavior and is not known to have confronted him about a CIA assessment that Russia offered bounties for killing U.S. troops in Afghanistan.

Find our fact checks for the #Debates2020 here. https://t.co/21qxKPrCVb pic.twitter.com/0XyX5RVrw5

It was … exhausting. Donald Trump constantly just made stuff up. And the few times he told the truth, he was praising dictators and election interference. And that was only the first half. Trump kept on Trumping the whole time, but Joe Biden was unrelenting on not letting his off the hook for his lies.

“But you’re the President.” This moderator is great at concise interjections.

Biden won the last debate by default. He is winning tonight by simply kicking Trump’s ass like a Professor debating a monkey who just learned to paint circles and now thinks he understands Plato.

“C’mon!” is pretty much the perfect punctuation to every point Biden makes #Debates2020

But how did that mute button work? Well … there was still a lot of interrupting and yelling. But moderator Kristen Welker was far more firm with the President, but he still managed to talk over her as much as he could.

This debate has a fever and the only prescription is more mute button pic.twitter.com/VlG7Aecgrt

The most powerful moments came however when Joe Biden got fired up. It was seriously powerful to see Biden refute Trump dumping on Democratic governors and cities by saying he would be a president for all of America. He excoriated Trump for his child separation policy. But the final half of the debate Biden was on fire with gumption.

A “well cared for” child who has been ripped from their parents and orphaned due to cruel policies is not “well-cared for.” Period. #Debates2020

Biden also hit Trump hard when the topic of race came up and Trump started lying again and hysterically claiming that he was the least racist person in the room and the best President for Black since Abraham Lincoln. It was completely insane and Joe called him out on it. And Trump didn’t get the joke when Biden did.

Biden sarcastically refers to Trump as “Abraham Lincoln,” and Trump gets confused by it pic.twitter.com/Ogdt1QXf3g

And then … Trump started lying again. By that time, it was hard to follow but he started talking about how stopping climate change would lead to buildings with very small windows. It was long past time to start drinking when that started up. But Welker

“I know more about wind than you do.” You sure do, Trump, because you’re full of fucking hot air.

I’m so afraid someone is going to take away my windows and replace them with smaller ones.

TRUMP 2020: YOUR WINDOWS WILL BE HUGE

In the end, Joe Biden’s closing statement was that character was on the ballot, as well as policy, and that it was clear that only one person on the stage tonight had character. This debate certainly opened a very large window on to that.