What Were My Parents Thinking? Sharing Nostalgic Favorites With Our Children 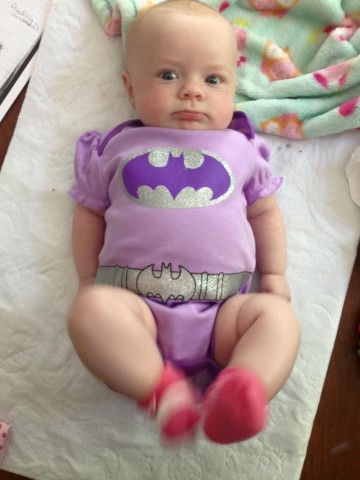 In our home, we have many geeks. I’m the mom and also the Star Wars and Firefly geek with a penchant for sci-fi/fantasy novels and word games. My boyfriend, a security guard by day, is part of a let’s play duo in his off hours. Our son is so into Minecraft he literally talks about it in his sleep, and for our 4-month-old daughter’s newborn photo shoot, she sported costumes from Rainbow Brite to Green Lantern—all homemade, to perfection. We’re up to our eyeballs in geekery, so naturally, we’re trying to cram it all into the next generation.

Namely, our 5-year-old son Lucas and our daughter, Amelia-Rose (pictured above).

I’ve found, over the last two years of introducing my son to a few of my favorite things, that my childhood nostalgia is liberally overlaid in shades of rose. Also, were my parents completely oblivious to the media I was consuming back then?

Now that Lucas is almost six, we’ve been able to really open his eyes to the things that molded our childhoods, with mixed results. As young as one, he was tinkering with my iPad, crashing birds into pigs and squealing with delight. At two, he discovered that Mickey Mouse is gamifying our youth (something recently discussed on Polygon), pretending Toodles had turned his watering can and galoshes into necessary tools for quest completion. At three, when my boyfriend Kyle moved in, we set up the collection of classic consoles in our office, and he jumped right in. The day he completed Super Mario Bros. 1-1 without help, I took a picture for our family scrapbook.

We have found that some of our favorite classic games are truly timeless—this is a sentiment I’ve heard echoed by other parents. Over a weekend vacation recently, we packed up a selection of Sonic games and a Sega Genesis, for entertainment (we have a sickness, truly). Time and again, despite Lucas claiming he didn’t want to play the game, my boyfriend Kyle would pause a session of Sonic 2 to grab a snack or change the baby’s diaper, and come back to find him on the literal edge of his seat, stolen controller in-hand.

We caught him red-handed, flinging Sonic wildly around the landscape, screaming at us over his shoulder about all the rings he had just “exploded.” His eyes never leaving the screen while we watched him systematically deplete carefully collected extra lives. At first, we found ourselves coaching: “No, go up there, you have to go fast, don’t hit he spikes.” Followed shortly by a defeated, “Fine, do whatever you want.” Eventually, we realized it was truly more fun just to watch. Within minutes he understood that he could hold down a button to spin fast, started collecting rings compulsively, and managed to beat Dr. Robotnik on one of his first tries, unaided.

More than our pride at his accomplishments, as a parent, I watched my child bond with his step-dad in a truly unique way. Our baby, Amelia-Rose (no connection or pun intended, Sonic fans), squealed and chattered at the two of them for hours. They wasted away a perfectly good sunny afternoon, and I couldn’t have been happier. He had dabbled with the series in the past while his step-dad was recording LP episodes of Sonic games, but he had never been invested—never really wanted to win, progress, or share his experience.

On the other hand, Sailor Moon was something we were really looking forward to sharing with our son. I knew that Usagi’s outfits, transformations, and quirky sensibilities would be right up his alley! I gleefully ripped the cellophane off my Sailor Moon Season 1 set, and settled in with some popcorn and some of his plushies (Rainbow Dash and Mario). Within 3 episodes, I was horrified and questioning everything I ever knew about my love of the series. When all was said and done, we made it only 6 episodes in before I tragically put an end to it, completely taken aback. These girls were so vain, and her superpowers were triggered by a magical makeup mirror? I was right about my son, though: He was hooked.

We try really hard to instill in him, by example and teaching, that beauty isn’t only skin-deep—that all people are beautiful because of their size, gender, color, etc, not in spite of those things. When we got to Season 1 episode 4, “Slim City,” I found myself cringing at the instances of fat shaming (SO MANY) and rolling my eyes as Usagi hated on herself for enjoying some pork buns. When two days later my little boy commented casually while I folded laundry, “Momma, your tummy is big and fat” (I was 5 months pregnant at the time), I couldn’t bring myself to watch any more with him.

It’s a catch-22 for me. I know that in time, down the line, Sailor Moon is absolutely something we will revisit. I still love her—I “squee” over the series and its adorable merchandise regularly—but we’re going to have to wait a few years before we try this again. I want to be able to talk to him about everything the show does wrong, which he’s not quite ready for, before we can truly celebrate it for what it does right.

There are so many things that we find ourselves wanting to share with our son, every day. So far, the 1982 Annie movie was a hit, as are my boyfriend’s original Transformer and Megazord toys. My Little Pony and Hello Kitty have also become household names (as well they should). Things that haven’t gone well? The Transformers cartoon series, Sesame Street, and Candyland. (He’s basically a monster). 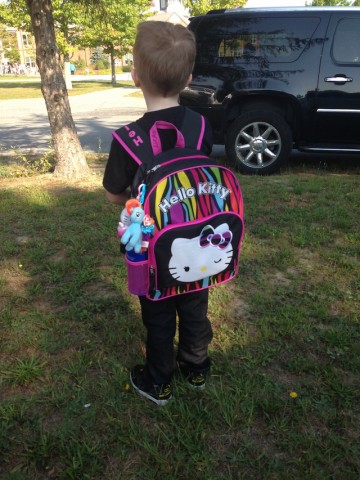 A conversation we circle back to, time and again, is about Star Wars. As I write this, I am wearing a Star Wars shirt. There is no one in this house more invested in my children becoming Star Wars fans and finally having someone else to make Star Wars jokes with. Yet, I am the one keeping the inevitable at bay. It took our journey through Sailor Moon and the Transformers show to get to this point: He’s not ready yet. He’s a sensitive kid. We’ve tried really hard to teach him that violence is not the answer, and that gratuitous violence is not entertainment. He’s not quite ready to learn that light sabers are elegant and civilized, where blasters are clumsy, barbaric even. Guns are scary, not fun.

Lucas’s Father and step-dad have been itching to revel with him in the wonders of Chewbacca and Mos Eisley. We all know he’ll love it; he already does. What little he knows from the Disney Channel and reboots have got him crazed. What he won’t love, however, is the charred skeletens of Uncle Owen and Aunt Beru. He also won’t love the trash compactor scene, because he’s a kid who is sensitive to tense and emotionally frightening media. He still occasionally reminds me that his Great-Great Grandmother is dead and buried (he’s very literal), and killing a Tauntaun to use its insides for warmth might just stick with him into dreamland.

When we went to go see The Boxtrolls in theaters, he made us leave. The stop-motion villain was too menacing, and he was terrified. Six months later, we tried to watch it at home via Red Box, with the same result. Now when we come across the movie anywhere, he arbitrarily reminds me of “that one time when it was really scary.” He’ll say, without being asked, “Let’s not watch that one, I don’t like that one.” He’s five, and he knows himself—to a point.

I live in fear that his introduction to the Star Wars saga is exactly, poignantly appropriate as a do or do not moment. I worry that if we try too soon, and he gets scared, he won’t ever want to try again.

A year ago, I went to Rhode Island Comic Con and took a photo at an official Star Wars booth with a professional Darth Vader cosplayer. I showed him a picture of me hugging the towering Sith Lord who he had been on a previous Halloween. He cried, asking, “He’s real? He’s a real scary guy?” He worries about me, and about bad guys. 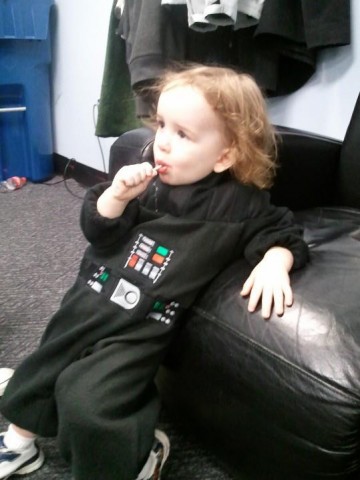 So I think this year (like just about every year), the adults will watch A New Hope again, and we will check in on whether or not we think he’s ready. Until then, we’ve got more than enough geek cred to get him off to a great start in the world. Now that he’s going into Kindergarten, I’m hoping he’ll let me read to him from the Harry Potter books and introduce him to Tamora Pierce’s heroines of Tortall.
First, we just have to get him to stop wearing his Marvel Heroes belt with his Batman shoes. These kids, they just want to see the world burn.

Nicole Tompkins-Hughes is a freelance writer talking about games, tech and all things parenting-related. She is passionate about diversity and equality, and the people that make our worlds go round. She can be found on Twitter, @Souriant_Nymh and examples of her work can be found at SeeNicoleWrite.tumblr.com.