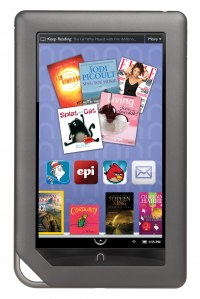 Barnes & Noble unleashed a significant update to their Nook Color today, v1.2, which brought Android 2.2 along with it, essentially advancing Barnes & Noble’s e-reader to the point where it now seems to be more of a tablet, including a mobile app store for the Nook, appropriately called Nook Apps.

The Nook Apps store launched with 125 apps, priced at $5.99 or less, with about half of them priced $2.99 or less, as well as some less impressive, though still functional, free apps, such as organizational tools. The update also brings Nook Email, a pre-loaded, basic email app that is ready to roll with Gmail, Hotmail, Yahoo Mail and AOL. The update also brings Adobe AIR and Adobe Flash Player support, which, as anyone familiar with Flash can attest, allows for a multitude of interactive options within the Nook Color’s apps, which is currently intelligently being utilized with children’s books; for example, including learning games with the children’s classics. If you’re wondering, yes, Angry Birds is available on the Nook Color. The update is available now to download manually, or one can wait for the WiFi release sometime in the next week.

The Nook Color currently sits at $249, a cool $250 cheaper than the cheapest iPad 2 and BlackBerry PlayBook. Though not currently as robust as an iOS device, or as widespread as Apple’s iron grasp on human souls, updating e-readers with tablet-like functionality could be a clever way to gain market share, as many of the features that make fancy tablets so expensive are neglected and remain unused when owned by a more casual consumer.

I mean, what else do people use mobile devices for other than Angry Birds anyway?