What’s the Deal with the New Nook Color? 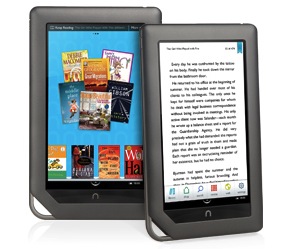 Barnes & Noble announced a major update to their Nook e-reader line yesterday: The Nook Color. The device has a 7 inch full color LCD touchscreen with a 1024×600 resolution with 16 million colors, has a film on the screen to help reduce glare, runs on Android, has 8 gigabytes of storage, and has built-in WiFi, as well as integration with Facebook and Twitter. It’ll be launching at a $249 price point and will be shipped starting November 19.

Barnes & Noble seems to be marketing the Nook Color as a hybrid e-reader and tablet computer, though from various impressions around the web, the device is being met with mixed reviews.

The first point that nearly every outlet makes mention of is the Nook Color’s meager 8 hours of battery life (even with WiFi off), compares unfavorably to the first-generation Nook’s 10 days of battery life. A significant decrease in battery life is what happens when anything ditches a power efficient e-ink display for a full color touchscreen, but 8 hours compared to the regular Nook’s 240 doesn’t make for a desirable lifespan. On top of this, the Nook Color doesn’t have 3G connectivity, requiring one to find a WiFi hotspot in order to access the magic of the Internet.

Another point of contention, as John Biggs of CrunchGear points out, is that even though the device runs Android, it won’t support the Android App Store, detracting from Android’s widely-praised openness, one of the operating system’s biggest selling points.

CrunchGear has a video (reproduced below) with the Nook Color being demoed and it’s quite clear that the device’s UI is sluggish. Loading articles and books seems to be speedy enough, but the scrolling and zooming is painfully slow, complete with not recognizing the touchscreen input on occasion. Switching to landscape mode also seems rather slow, as the whole screen blacks out for a few seconds too long before the UI reappears. The woman demoing the tech in the video should win an award for having ice in her veins, as she deals with the painfully slow and sometimes unresponsive UI without skipping a beat in her oral presentation.

Apparently, the UI shown is in beta, so it should be somewhat faster upon release, though if that were the case, I feel like the woman demoing the tech would’ve made mention of that as many times as possible in order to provide a disclaimer for a UI that runs at an archaic speed for modern times.

Overall, the Nook Color seems like it is being met with the stigma of an in-between device; not exactly an e-reader, but nowhere near a tablet. As John Gruber of Daring Fireball puts it, “it’s only $249, but that still strikes me as a no-man’s land. A lot more expensive than the Kindle, a lot less capable than an iPad.”