None Of This Is New: An Oral History Of Fanfiction

The following was originally posted on Rhymes With Nerdy and has been republished with permission.

Then I remember that not everyone spends as much time on the internet as I do, and I calm down.

From the inside, fandom looks like a complex series of interlocking sandboxes filled with interesting and innovative people; we see discourse, creativity, the occasional clique, and the kind of talent that makes us want to punch something. From the outside, though, I imagine it looks more like a bunch of weirdos stealing shit and playing in abandoned buildings.

Honestly, it’s probably a little of both.

To the fan-adjacent outsiders who are at least aware that fanfiction exists, it’s often associated with high-profile examples like the bad-fic-turned-bad-novel Fifty Shades of Grey and, well, Harry Potter erotica. Those more in-the-know might mention Cassandra Clare or Naomi Novik, both of whom were fan writers before publishing original work; or they might bring up Diana Gabaldon or Anne Rice, both notoriously opposed to fic based on their work. At some point in this hypothetical conversation, someone will probably mention Star Trek.

The shape of fandom as it is today owes a lot to the communities that formed around Harry Potter and anime in the late ‘90s and early ‘00s, and to the increasing accessibility of the internet over the past decade or so. The shape of those fandoms, in turn, was due to those that migrated out of meatspace onto the brand new baby internet, which of course owed their structure to the zine-based fandoms of the ‘70s and ‘80s. All of which can be traced back to – you guessed it – Star Trek. 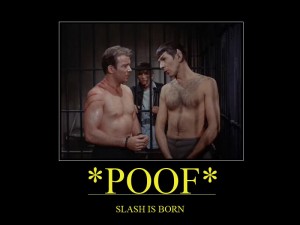 Star Trek: The Original Series is often looked to as the origin of modern fandom, and many of the networks and communities those fans established continue to influence fan interactions to this day, as does the example they set in using fandom as a means of social awareness and political action. It is also, for a number of reasons, one of the most well-documented and closely studied fandoms ever.

Well… okay, in a sense, that’s not strictly true, but I’m getting to that.

See, even though Star Trek fandom has been extremely influential in fan culture, and even though it’s one of the earlier examples of how contemporary fandom works, it’s nowhere near the first or the most influential. For that, we need to go back… pretty extremely far, actually; but for now, we’ll just take one step back to Star Trek fandom’s direct predecessor: Sherlock Holmes.

I expect a few eyebrows are going up at this point, but bear with me. The Sherlock Holmes stories were serialized in periodical publications and were followed by a large and devoted readership. Readers often wrote to the author and to each other with questions, encouragements, and speculations. When Doyle killed off the character, it was pressure from his readers that caused him to bring Holmes back to life. 1934 saw the formation of two fan groups: The Sherlock Holmes Society and the Baker Street Irregulars, and the Irregulars remain active to this day. And yes, Holmes fans wrote fanfiction, even back in the 1880s.

Now, we’ve reached the point in this hypothetical discussion where most people are nodding and “hmm”-ing and saying “Well, that’s interesting.” This seems like a good time to pause and ask what fanfiction actually is, rather than defining the term at the beginning of the essay like the trained academic that I am.

If we take the nebulous concept of “fanfiction” and define it, a bit loosely, as any work of fiction which openly borrows major elements from another work of fiction, then we can start finding examples and figuring out when exactly this all got started.

So we’ve got Sherlock Holmes in the 19th century, but a little hop-skip back to the 16th gives us another massive example: Shakespeare. I’m not talking about the groupies at the Globe Theatre – though they were definitely there – I’m talking about William “Fanboy” Shakespeare, himself. Pick a play at random and bet your bottom dollar that it’s based on myth, legend, or historical anecdote, with a liberal splash of that Shakespeare je ne sais quoi. (Okay, it’s not je ne sais quoi; it’s iambic pentameter. Shush.)

Yes, hypothetical conversant, I see you waving your arms in consternation, protesting that myth, legend, and historical anecdote aren’t “fiction.” Okay. Fair enough. So what are they?

So Shakespeare wrote fic, but that’s just one example. The thing is, the whole idea of “original fiction” and intellectual property wasn’t even a thing until the 18th century. That might seem like a long time ago, but, given the span of human history and how long we’ve been telling stories, it really isn’t. 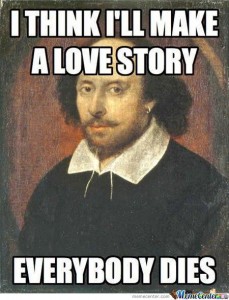 The truth is, the idea of taking someone else’s story and doing something new with it didn’t start with Star Trek fans, or the Baker Street Irregulars, or even Shakespeare. It started when the first storyteller sat beside a fire on the bank of an ancient river and spoke; and, the next night, one of her listeners sat beside a different fire and told the same story in a different way. The tradition continued when early Rabbis recorded the stories of their people and added just a little bit of commentary. It influenced history when Augustus was like, “Dude, write a story about Aeneas where he’s all patriotic and shit,” and Virgil was like, “OMG I totally will.” It was canonized in literature when a Christian scribe decided that the legend of Beowulf would make more sense with a few lines about God. It appears in every history book, every retelling, every interpretation.

It you’ve taken an English class in America, you’ve almost certainly been assigned fanfiction to read, not just in the form of Beowulf and Shakespeare, obviously, but also in the form of books like Johnny Tremain, Wide Sargasso Sea, and Paradise Lost. If you’ve been in a bookstore, you’ve seen popular and widely-marketed fanfiction in the form of, say, Gregory Maguire’s Wicked series, Pride and Prejudice and Zombies, or the shelves upon shelves of novels based on Star Wars, Star Trek, Doctor Who, Dungeons and Dragons, and a host of other franchises.

This is a rather involved hypothetical conversation and a long way around to make my point, so thanks for sticking with me. In the end, all of this is really just to say that, yes, Harry Potter erotica is a thing. And it’s not new.