Nomadland Is an Intimate, Unflinching Look at Grief and the American Dream 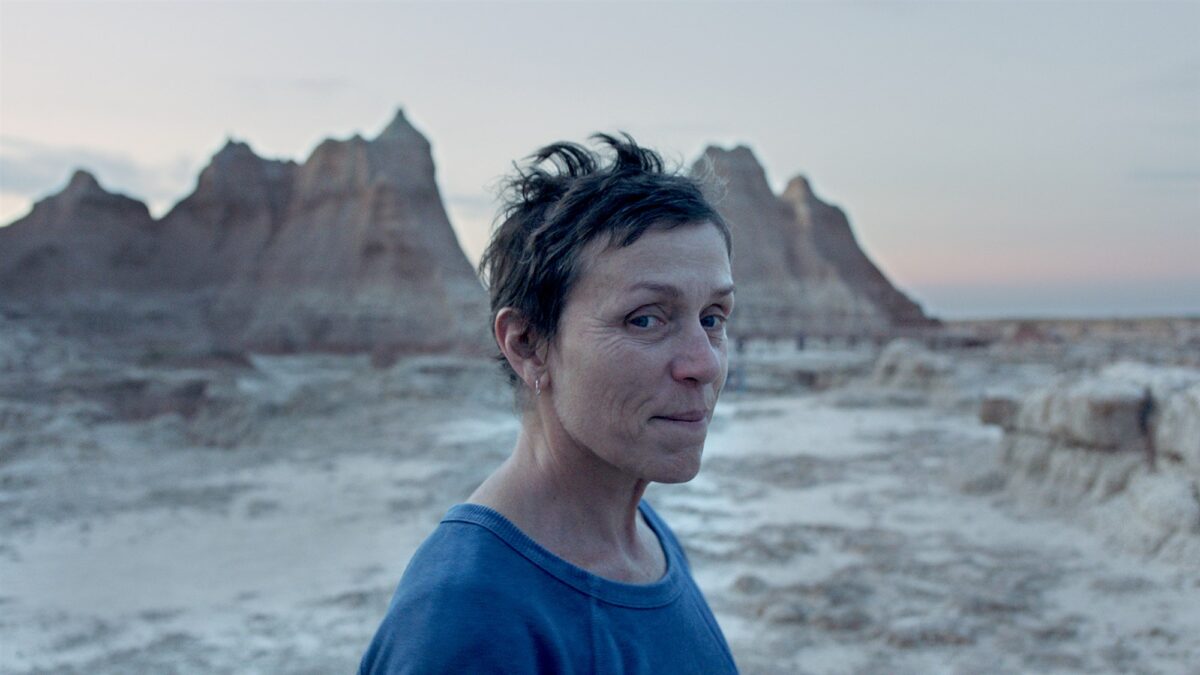 There are some actors whose faces speak volumes, who can convey emotion and pathos with a simple twitch of the lip, or a raised eyebrow. Frances McDormand is such an actor, and she brings her inimitable talents to Chloé Zhao’s quiet and contemplative elegy Nomadland. The two-time Oscar winner plays Fern, a flinty widow living out of her converted van who travels across the country chasing seasonal work. A stint with Amazon’s Camperforce, a job in a rock quarry, and a campsite host are just a handful of jobs Fern takes on to fund her itinerant lifestyle.

Fern is a vandweller, part of large but little seen community of older folks who found themselves struggling after the financial recession of 2008. While the nomadic lifestyle is a choice for some, for others it is a last resort, after steady work dried up and mortgages couldn’t be paid. This older, roaming workforce was the subject of the 2017 non-fiction book Nomadland: Surviving America in the Twenty-First Century by Jessica Bruder, which inspired the film.

In fact, aside from McDormand and fellow actor David Strathairn, the cast is made up of real life vandwellers, several of whom were featured in Bruder’s book, including Bob Wells, who runs a popular YouTube channel called CheapRVliving and a non-profit called Homes on Wheels Alliance to help people transition to the lifestyle. Wells also hosts the Rubber Tramp Rendezvous, a two-week gathering of nomads in Quartzsite, Arizona, where folks take workshops, trade wares, and meet fellow travelers.

Zhao artfully showcases both the supportive community of vandwellers and the intense isolation of the lifestyle. Fern’s loneliness is magnified against the stunning natural landscapes she visits, like Badlands National Park and Sequoia National Park. Though the film shies away from overt political messaging, viewers can’t help but contrast the stunning geography of America with the country’s failure to provide a social safety net for its most vulnerable. Grief is a recurring theme in the film, both the personal grief of losing a loved one and the larger cultural grief of the American Dream. So many of these vandwellers spent their lives working hard, and thanks to the ruthlessness of capitalism, they are left with nothing. It’s an American tragedy we’ve seen time and time again, like a modern day take on Steinbeck’s The Grapes of Wrath.

And while these landscapes function as a co-star of sorts, it’s McDormand’s performance that takes your breath away. As Fern, she struggles with grief on multiple levels. Fern is faced with not only the death of her husband, but the death of Empire, Nevada, the town she called home. Empire was built around the US Gypsum plant that manufactured sheetrock, and the closing of the factory decimated the company town. A mere six months after the factory closed, the town’s zip code was discontinued.

Perhaps it is why Fern keeps on driving and refuses to put down roots. And while she remains friendly and amiable to the characters she encounters on her journey, she remains committed to the road. “I’m not homeless. I’m just houseless,” Fern tells a friend at the beginning of the film. But what do you call home when your hometown becomes a ghost town?

With its haunting beauty and stirring performances, Nomadland may be the best film of the year. It’s already racked up awards like the Golden Lion at the Venice Film Festival, and has garnered 4 Golden Globe nominations. Academy Award nominations are sure to follow. As for Zhao, her next film, Marvel’s Eternals, will be quite a departure from the indie sensibility of Nomadland. But if Nomadland is anything to go on, she may deliver the most artful MCU film ever.

Nomadland is currently streaming on Hulu.