Barnes & Noble Gives Up on In-House Nooks, Looks for Partners for New Tablets

America's biggest bookstore chain needs a helping hand developing and building its next foray into the eReader market. 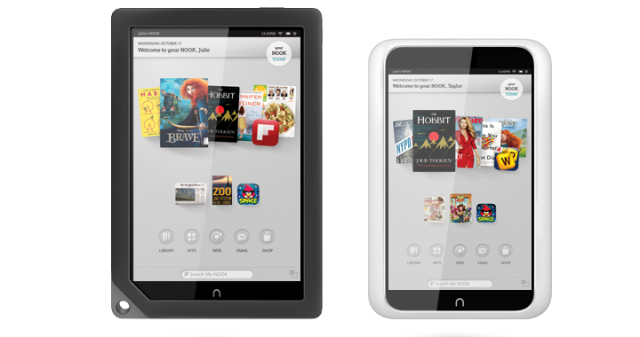 Hey, do you want to help Barnes & Noble make a color tablet that’s mostly an eReader, but also some other things? Because someone is going to have to. America’s biggest book retailer is looking for a hand developing their next generation of Nook tablets, which will no longer be an in-house project going forward, the company announced today. By seeking manufacturing partners, the bookstore chain is hoping to stem its losses on the readers which have seen associated revenues drop over a third in the past year.

Sales of the Nook HD have been suffering in a crowded tablet market as the book retailer’s attempt at a ‘do everything’ entertainment tablet foundered. Today’s announcement, though, doesn’t mean the end of Nook-branded tablets — just the end of Barnes & Noble flying solo on the products. For their next iteration, the company wants to find a more experienced partner that can share some of the risk with them. It probably wouldn’t be the worst idea to pair up with a company that had a little more experience in the tablet market, either.

If you’re still infatuated with the Nook HD, this may be the time to pick one up, as the company plans on selling remaining stock until they’re out — likely at the current discounted price of $129 for the 8 GB model, if not even cheaper in a month or two. Either way, I wouldn’t put too much stock in that “Limited Time Only” tag they’re wearing right now.

Fans of the company’s more bare-bones eReader offerings –and I know at least a couple, because until you’ve had a shouting match in a bar over the relative merits of the Kindle and Nook, you have not lived — have nothing to fear, as the SimpleTouch and Glow will remain in-house pet projects for Barnes & Noble.