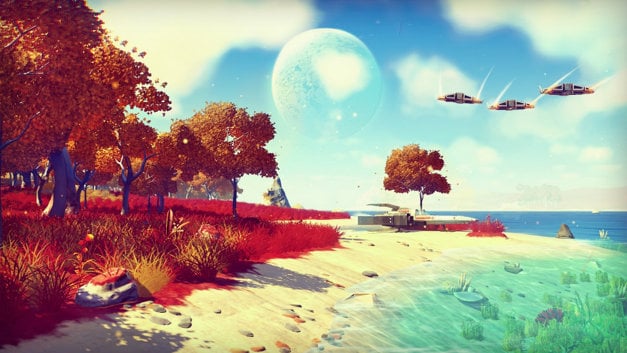 No Man’s Sky is the current poster child for managing expectations when it comes to hyping up a video game pre-launch. Much of what was expected—and even promised—to be in the game wound up either absent or underwhelming in the final release, but a new update has taken steps to remedy that, and players are pretty happy about it.

The initial, tech demo-esque reveal of the game’s big hook—an essentially never-ending expanse of cosmos, generated largely independently of its human creators, with countless creatures and worlds for the discovering—generated a lot of excitement, but the eventual gameplay wound up feeling a bit too much like a tech demo. There was a lot to see, but not a whole lot to do, and even the sights weren’t quite what players were expecting.

The Hello Games team has been hard at work since then, and the new “Foundation Update” has brought not only fixes, but one of the originally promised aspects of gameplay that players were surprised not to find in the game at launch: building bases on alien worlds. You can now set up your very own base and even hire alien workers to staff it. Take a look at how it works in this video (and/or read the full, exhaustive rundown):

Hello Games also made some improvements to the UI, performed some bugfixes, and tweaked other aspects of the game that may change some of the planets that players have previously discovered. They also added the ability to purchase freighter ships, as well as new modes of play in a more difficult, low resource “survival mode” and a more relaxed “creative mode” that removes the need for combat and resources.

The game is still very much a work-in-progress, as the developers’ announcement about the update mentions that this is only the beginning:

“In the nine weeks since then our small team has been hard at work on development, testing and certification for the Foundation Update. It won’t be our biggest update, but it is the start of something. […]

“Positive or negative feedback, you have been heard and that will truly help to make this a better game for everyone.”

Perhaps in future updates, we’ll eventually see some additional features (maybe multiplayer?) that help the reality of the gameplay live up to the potential of the impressive universe-generating technology the game is built on.

(via Geek.com, image via Hello Games)