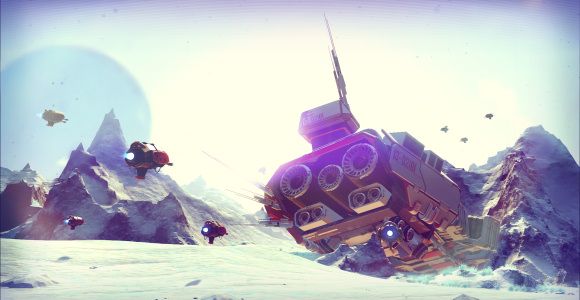 It seems that the No Man’s Sky community has taken a turn for the worse.

A few months after the game’s inauspicious release, the No Man’s Sky Reddit community was temporarily shut down. One moderator expressed concern over the growing toxicity within the community, and cited this as one of the reasons for the shutdown. In a post from one of the community’s (now ex-) moderator, R0gueWolf wrote:

So I purged the subreddit. It’s become a hate filled wastehole of no actual discussion. It’s not what we intended it to be and I don’t like providing a platform for hate. I’m sorry to everyone who used the subreddit as intended but you are now in the majority. I’m sure you can find a different place to discuss this game. It’s not hard.

This was my decision and mine alone. The other moderators tried to sway my opinion but cynicism got the best of me as usual.

The subreddit has since reopened under new moderator management, according to a post pinned to /r/NoMansSkyTheGame. While subreddit drama is usually a less-than-noteworthy event, what’s intriguing about this occurrence is that it comes as a bit of a cap to the toxicity that had been growing within the No Man’s Sky community as of late.

Before the game even released, Hello Games’ founder Sean Murray received death threats from an increasingly frustrated community who had grown tired of waiting for the game. When Kotaku’s Jason Schreier reported on those death threats, he, too, was targeted by death threats. Most recently, however, Hello Games the UK Advertising Standards Authority launched an investigation into the potentially misleading promises made by the game’s advertising materials. Since the game’s launch, players have been compiling the differences, comparing preview videos to the live game. The number is not insubstantial, hence why they have the Authority’s attention.

Judging by top-level posts, the subreddit appeared to be pretty on the level. However, one look at the comments on any of the complaint posts will show you that there’s a much more toxic community running just under the surface.

As well, one of the top upvoted posts on the subreddit as of this writing has requested that none of the old mods be reinstated (fair, I guess), but then goes on to insinuate that they worked for “the Frauds at Hello Games.” The user explains:

The only reason they would want to wipe the whole sub reddit is because of the negative news and reviews of the game. They are trying to cover for Hello Games and remove any negativity about their game even if it means closing positive and informative discussions.

A few of the comments have (likely rightfully) called out the post for being very tinfoil hat-like, but as can be seen by the post’s upvotes and more than a few comments, the paranoia is real.

After such incredible drama consumes an entire subreddit, especially one with a somewhat high profile like this one, tensions tend to run high. Whether this purge and the resulting revival will work out in the end or not remains yet to be seen. Only time can really tell that tale. But what’s clear is that the troubles for No Man’s Sky and Hello Games extend far beyond the studio and its employees.