Whoever Created This “Homoji” Keyboard: Please Stop and Re-Evaluate Your Goals

Time to talk about slang term etymology, everybody! Have you noticed that white gay men frequently use slang terms originated by black women and black queer communities? I’m definitely not the first person to point this out. I’m sure you’ve noticed it before. Sierra Mannie’s piece for TIME, “Dear White Gays: Stop Stealing Black Female Culture,” points out the problem at length. A lot of the most popular slang terms of our generation tend to hail from AAVE in general or sources like, say, RuPaul’s Drag Race. First, white queer communities latch onto these phrases, and from there, white straight people latch onto them, and then they reach critical mass.

This is a tricky problem to point out, because everybody gets defensive right out of the gate. So just try to lower your hackles for this one. I’m not saying you can’t use any slang terms ever again… just, you know, take note of what you’re doing, okay? Everything starts somewhere. And, chances are, black women should get the credit for it. Like, say, rock music. But I digress.

This all brings me to the announcement of this new app, the “Homoji” keyboard, which was put together by a company called MajestyK. I’ll say this about MajestyK: most of their staff appears to be white dudes, but it’s not all of them, so, that’s cool. I still don’t feel great about the app they made, though, since it appears to be an attempt to capitalize on slang terms popularized by marginalized communities.

Based on the emojis that are available in this set, it would probably be more accurate for this app to be called “the AAVE keyboard,” or similar. Instead, it’s called the “Homoji” keyboard, which … well, it’s kind of a misnomer, to say the least. These emojis aren’t necessarily about being gay. They’re more like… a glazed-over approximation of what being gay looks like on TV.

I checked out the “Homoji” keyboard because, in spite of the reductive name of the app itself, I thought there was a possibility that there would be some cute emojis in there. Maybe some rainbows. Maybe some diverse images of people holding hands. I don’t know! Those are just some fun ideas, off the top of my head!

Instead, this app is front-loaded with a section called “slang,” which is made up almost entirely of AAVE phrases. Next, we’ve got a section called “love,” which also includes more AAVE phrases, but also lots of different kinds of heart images. There are a lot of images of animals in this section—no people depicted here.

Then there’s a separate section called “animals,” which contains some more overt references to gay male cultural signifiers. For example, there’s a “gym bunny” (a rabbit wearing a rainbow tank top) and an “otter” wearing a leather hat (here are some definitions of “gym bunny” and “otter,” if you need them). There’s also a “bear” and a “bull” and… well, you’re getting the picture, right?

Next, there’s a section called “queens,” which is made up of stylized images of divas and drag queens. Then, there’s a section called “food,” which is predominantly comprised of food objects that are phallic, plus a couple that are more testicular in nature (e.g. the two cherries). Of course there’s also the peach—who could forget the peach! I guess this section and the “animals” section are here to remind me that the creators thought that only gay cis men would download it. 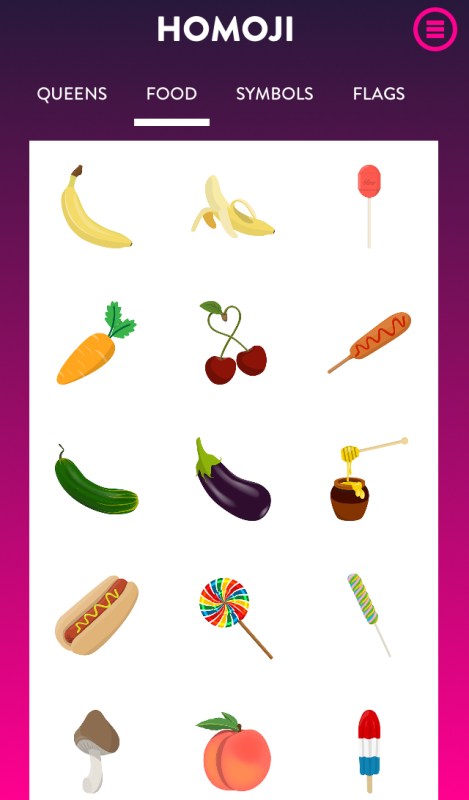 The last two sections of the app, if you scroll all the way over, are called “symbols” and “flags.” This is the part where the app seems to be trying to make more of an attempt at diversity. There are some female symbols and trans symbols here, as well as flags for other sexualities and identities. Nothing says “romantic” and “sexy” like a flag, am I right folks? (Sigh.) I should also note that the “love” section has at least one heart with two female signs in it. So… yeah. They’re trying. Kind of.

Now, this did provoke some interesting questions for me. What would a more inclusive app even look like, exactly? You know, one that doesn’t just include a bunch of stereotypes. And, also, as stereotypical as these images are, I get why they’re here. They’re still a part of gay culture. It’s just that they aren’t the only thing.

If this app does sound like your thing, though… go get it, I guess. It’s free. I’m not sure why exactly MajestyK made this app in the first place, because it doesn’t seem like they stand to gain financially from it (I didn’t notice any ads or micro-transactions… but that stuff might be coming later). They appear to also be the same company that made the Pepsi emoji keyboard, which I wasn’t impressed by either.

Maybe MajestyK just thought this would be a fun app to make in their free time. Maybe they aren’t trying to capitalize on terms made up by marginalized communities in order to advance their standing as a tech company, or to earn money for themselves later down the line. I don’t know! I don’t know their goals, here.

If they do want to just make a fun app for queer people, then I hope they’ll consider changing the overall tone of this app, because the current version is… not enough. “Homoji” claims in its description that it “serves pride by embracing gay culture and spreading a text-message of acceptance to all through technology.” That’s not what’s on offer here. Instead, this is an app that’s paying lip service to the queer community but, as far as I know, doesn’t highlight anything other than the most basic approximation of the gay experience.

I would encourage MajestyK to hire some queer artists to contribute more designs to the app, especially women and non-binary artists, and to consider donating any financial proceeds they might receive from it in the future to The Trevor Project or other similar charities. Just my two cents.

(via HuffPo, image via Homojiapp.com)