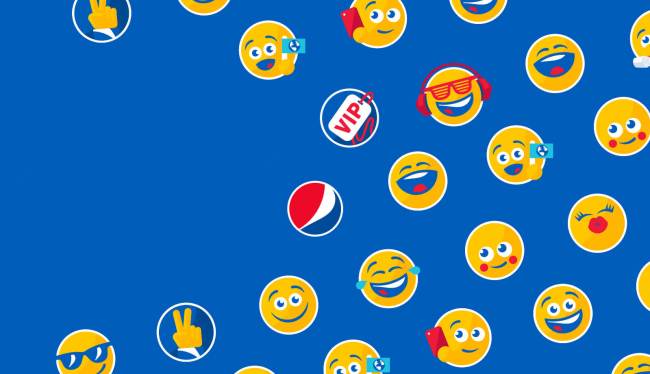 Remember that new Betty Boop emoji that got announced a month ago, on World Emoji Day? Betty Boop’s is part of a new set of emojis designed by PepsiCo, which will appear on a “PepsiMoji” keyboard for smartphones. You might also recall that, as part of the announcement, Pepsi sent us a miniature can of their signature soda with a rendering of their new Betty Boop emoji emblazoned upon it.

So, when are we going to have access to Betty Boop and the rest of PepsiCo’s new emoji keyboard? Well, you can actually download the “PepsiMoji” keyboard on iOS and Google Play already, if you want. That said, if you download the keyboard on iOS, it’ll require you to allow the developer access “to transmit anything you type … this could include sensitive information such as your credit card number or street address.”

It’s a pretty scary warning to accompany a silly keyboard app, but I get why it’s there. The PepsiCo people probably just want to track how often people are using different emojis. Unfortunately, it really turned me off using the app, but I installed it anyway for all of you so that I could test it out.

I’m sad to say that once I logged in, I wasn’t super impressed with the offerings. There are not very many emojis available on the keyboard yet, compared to the standard emoji keyboard, and many of the ones that are there look extremely similar to the pre-existing emojis from the other keyboard. Pepsi would need to do something here to convince me to use their keyboard instead of the other one, but so far I’m not really impressed by these. Worst of all, the Betty Boop emoji isn’t here! I scrolled through all the Pepsi emojis twice to be sure I didn’t miss her in the lineup, and I simply can’t find her.

Anyway, PepsiCo clearly wants to promote their new keyboard, so they partnered with Twitter to make sure that more people get to see their emoji designs. AdWeek reports that the “PepsiMoji” designs will appear as part of Twitter’s new “stickers” program for brands:

Introducing Promoted #Stickers A fun way to express your brand and engage with consumers! https://t.co/wIIDHAC0KK pic.twitter.com/usc4HRwrPU

How do these stickers work? Well, if you post photos on Twitter, in addition to the usual option to edit the photo that you’ll see at the bottom of it before you send out the tweet, there’s also a little smiley-face emoticon on the bottom of your photo as well. If you tap on that, you’ll have the option to add “stickers” onto your photo, like little smiley faces or archery bows or sailboats or whatever. Think of it as virtual scrapbooking.

Stickers can be searched on Twitter just like hashtags, also, so if you want to find every single example of someone using a sailboat sticker on their photo, then you can do that. Don’t ask me why that’s a thing, but it’s a thing.

Anyway, PepsiCo has bought a sponsorship, so that means that a row of six “PepsiMoji” stickers appears at the very top of the options menu when you select that you want to add a sticker to the photo you’re about to post. There are only eight Pepsi-branded stickers available right now, and none of them are Betty Boop. Nonetheless, you can look at those eight designs if you want to get a sense of what the emoji keyboard looks like.

Why do I keep bringing up Betty Boop, you may very well ask? Well, because it’s the only corporate partnership that I’m interested in, here. Twitter + Pepsi = yawn (sorry, mega-corps!). Betty Boop staging a comeback across multiple platforms? I’m here for that.

Betty Boop is staging a comeback, by the way, and it’s not just in emoji form. Zac Posen has been tapped to give Betty Boop a makeover (You might recall that Posen is the one who designed Claire Danes’ fiber optics gown at this year’s Met Gala). Plus, Ms. Boop is getting her own comic book series from Dynamite.

But … the Betty Boop emoji isn’t here yet. I’ll let you all know when it is.

(via Adweek, image via PepsiCo, Inc.)