Meet Ninjabot, A Robot That Can Kill With The Striking Force Of A Mantis Shrimp

Why do we insist on building robots that can kill us? Why?! 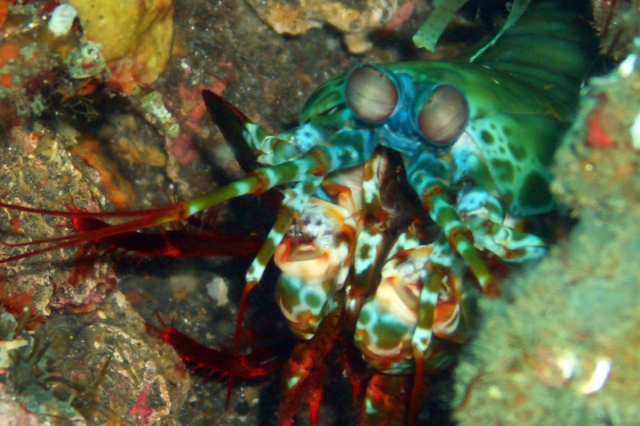 Despite looking utterly ridiculous, the mantis shrimp is a terrifying creature that should be treated with incredible respect. The mantis has a punch so hard-core, Captain Falcon is jealous. So, naturally, science decided it would be a great idea to build a robot with those very same punching powers. What could possibly go wrong?

I wasn’t kidding about mantis shrimp being terrifying. I can’t recommend this comic by The Oatmeal enough if you want to learn about them, but here’s the quick run-down: its front claws punch with the force of a literal speeding bullet, so quickly that they emit a shockwave and the water around them boils. Actually, it makes the water so hot it becomes the temperature of the surface of the sun. Also, they can see like ten trillion colors that we can’t even imagine, but that’s got nothing to do with the Ninjabot, so I digress.

Oh, yeah, the Ninjabot! Because we apparently want to make it easier for Skynet to eventually take over the world, researchers at the University of Massachusetts, Amherst, decided to make a robot that could mimic the mantis shrimp’s striking power. Just remember, if you don’t die of dismemberment when the Ninjabot strikes you, you’ll die boiled alive immediately afterward!

Guns use a small explosion to propel their bullets, but Ninjabot doesn’t have time for any of that nonsense; instead, it copies the mantis shrimp’s muscle patters, using a crank and spring mechanism for release. And the Ninjabot is incredibly successful; it’s arms match the velocity (25.9 m/s) and acceleration (3.2 x 104 m/s2) of the second-fastest mantis shrimp on the planet, officially making it the fastest robot in existence.

If we’re not careful, Ninjabot and the mantis shrimp will join forces to take over the world, so we should probably just start creating exceptionally-colorful statues in their honor now.

(via PhysOrg, image via Samuel Chow)