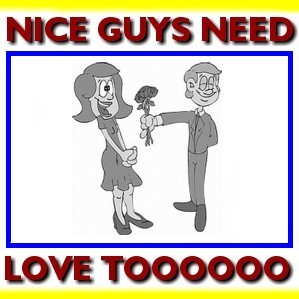 A new study published in the British Journal of Psychology suggests that, contrary to the popular saying, nice guys finish first, and actually do quite well with the fairer sex.

How many nice guys reading this just groaned?

A common saying amongst nice guys is “girls like jerks,” but a certain study attempts to suggest otherwise.

Dr. Tim Phillips of the University of Nottingham and Institute of Psychiatry in London and colleagues take a more logical approach to a theory that is essentially discussing love, a very illogical concept:

“The expansion of the human brain would have greatly increased the cost of raising children so it would have been important for our ancestors to choose mates both willing and able to be good, long-term parents…Displays of altruism could well have provided accurate clues to this and so led to a link between human altruism and sexual selection.”

Sure, their logic make sense, but we humans don’t always adhere to logic: Smoking is an illogical act for humans too, considering it gives us cancer, but that sure doesn’t stop us from doing it.

Phillips’ study involved 70 identical and 87 non-identical pairs of female twins completing questionnaires regarding their level of altruism and what qualities they looked for in a mate. Analysis of the answers seemed to suggest that since the females were altruistic, and looked for altruistic mates, the altruistic behavior would be passed down through generations.

Aside from a probably large amount of nice guys saying otherwise, another hole in the theory is the questionnaire itself, in that whenever anything is self-reported, it needs to be handled with some skepticism, considering people aren’t generally too keen on painting themselves in a negative light.

The common theory is that nice guys tend to be more successful finding partners as the opposite gender matures and looks for a mate to settle down with, but just remember girls, nice guys may not be so nice after spending their youth dejected.