Re-watching Newsies in the Trump Era | The Mary Sue 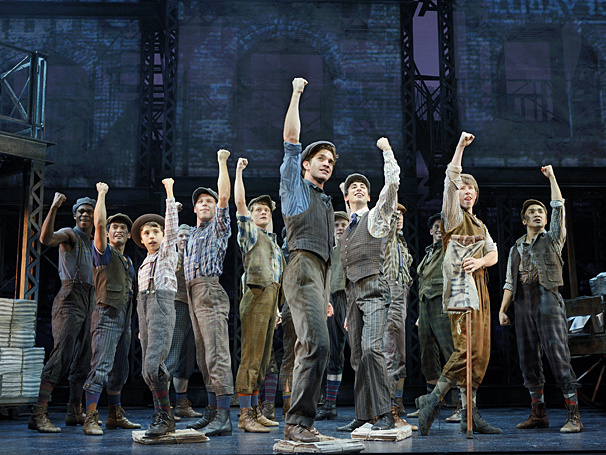 “Tell those in power,
safe in their tower,
we will not obey.”

On the night of Day Without Immigrants, I caught a Fathom screening of the stage production of Newsies. Like the lukewarmly-received 1992 cult classic, Newsies is quite a goreless Disney-fied escapist lens on a real life revolution by children under the poor child labor laws during the Newsboys Strike of 1899. Almost serendipitously enough, there’s this speech during the “Seize the Day” number:

“It ain’t just about us, but all across this town, there are boys and girls who aren’t playing, or going to school, instead, they are slaving to support themselves and their folks.”

When newspaper tycoon Joseph Pultizer raises newspaper price but not the newsies’ wages, Pultizer is told immediately it’s a morally reprehensible idea, hard on the boys actually doing his labor. But he rationalizes the price hikes with a “I’m just giving them a learning experience,” similar to the whole “misery builds character” trope rebuked by A Series of Unfortunate Events: “That’s just something people say when they’re trying to make others accept a miserable situation.” Even he is wary of the ire among his constituents, he feels immune against their criticism and they can’t veto his word.

But like a chant of “This is what democracy looks like,” the chorus is rising through earwormy “Do You Hear The People Sing” show tunes. Jack Kelly and the boys attempt to design strike signs (before the advent of memetic slogans) on cardboard or mops. They stand in the streets singing with the tune of Alan Menken’s score.

On a supplementary note, there’s also this line added in for the 1992 addition of lyrics in “Seize the Day”.

“And say to the others, who did not follow through…”
…You’re still our brothers, and we will fight for you.”

The boys also have a sister in their ranks. Don’t get me started on Katherine Plummer, played by a winning Kara Lindsay, a necessary update from the paper-thin love interest in the 1992 film. Even if she’s designed as the obligatory Disney love interest so the audience can enjoy the heterosexual tension between her and the hot lead Jeremy Jordan, she actually does a lot. She’s a turn-of-the-century female journalist has a solo number about writer’s block and the workplace sexism. And the music conveys the weight and urgency of the story she’s putting out in the world. Oh, let me project on her. She’s not just a fan of the movement, but she’s a spokeperson. She never underestimates the power of words, the oppressed children’s words, her own words, because as the Hamilton lyrics goes, history has its eyes on you. And she squees like a fangirl who has attained her calling. The boys do the protesting and shouting (and backflips), as the muckraker female journalist transcribes their battles into well-placed words underneath a David Versus Goliath headline in an era without the hashtags of social media.

But Pultizer blacklists papers to limit coverage of the boys’ plight, essentially controlling their narrative.

Fortunately, the boys’ voices rise in volume and number enough to gain prominence. From Manhattan, to Brooklyn, to the Bronx join in the chorus, raising their voices and their New York accents.

Pultizer looks outside his office window. And he doesn’t underestimate the numbers in the crowd. He’s surrounded. He can no longer be deft to their songs. If they’re not working for him, business falls. He’s underestimated their worth of employers he never took time to meet. Kinda like how the President did with Mexican immigrants.

It has a hint of grudge, but Pultizer strikes a compromise that satisfies both sides. Yeah, he remains in power and a minor slump in his profits is not quite the karma we wished on him. Though true to history, a compromise resolved the strikes.

For a revolutionary cherry-on-top, a politician also comes and saves the day. Teddy Roosevelt, not President then, but a New York Governor criticizing Pultizer’s exploitation practices right in his face. Sick burn. He waltzes into the plot like he did in the original 1992 movie and feeds pearls of wisdom to our hero. How lovely, to see a supportive idol, not watching revolution from the distance, but joining in. Not so true in real-life: Roosevelt’s dropping into the child labor revolution was fabrication for movie and musical. But it’s nice to live a borderline deux ex machina fantasy of a powerful influential, and supportive, politician literally and figuratively standing at your side.

Ultimately, I have to come back to Earth after the curtain call. Being able to access the stage Newsies on the screen but not quite the high-ticketed live production reminds me of Lindsey Ellis’s deconstruction of mainstream-popular productions, like Les Miserables and Hamilton, with rousing revolutionary themes while still technically feeding into the wealthy system. Does this factor render Newsies pointless and un-applicable to the Trump era? No. Is it something to be wary of? Yes.

Early in this new millennium where revolutions reoccur, I don’t blame those who are a sucker for fictionalized-historical revolutions with happy endings. Because we all deserve a happy ending we’re still marching and bleeding for.