Being The Rocketeer just got a little bit easier. 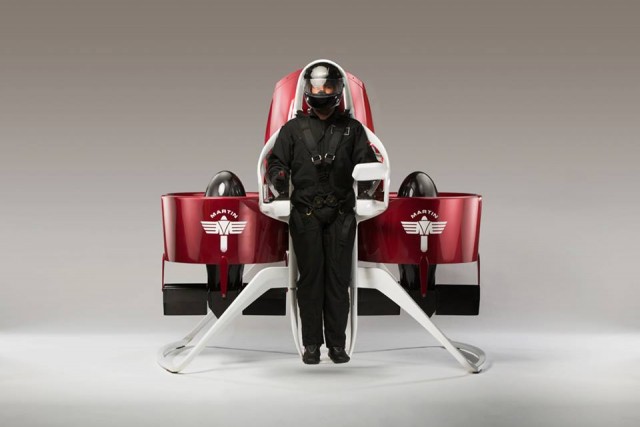 Whenever people talk about how we’re living in a science fiction future, full of smartphones and 3D-printed organs and the people planning the colonization of Mars, they always seem to end on the same disappointed note: But where’s my jetpack? Guys, it’s in New Zealand.

Kiwi Glenn Martin has been developing a personal jetpack since the 1980s, and the latest incarnation was just issued a flying permit. That means the developers can start manned test flights soon, with a commercial release expected next year. It also means that if your dream job is “jetpack test pilot,” the Martin Aircraft Co. is taking applications.

Okay, so, fine, it doesn’t actually use what you’d probably think of as jet engines. The device itself (pictured above) is made of two cylinders housing high-powered propulsion fans that are connected to a carbon-fiber frame. The pilot straps in and uses two joysticks to control their motion, offering proof that a lifetime of playing video games does have real world applications! Take that, Mom! And, of course, a rocket-propelled parachute is attached in case of any… unfortunate incidents.

Now for the bad news — Martin’s jetpacks will cost $150,000-$250,000 when they are first sold, though as with any piece of new technology, that price will likely go down over time. Just think about the giant, room-filling computers of the mid-20th century, devices no individual could imagine owning — let alone carrying several iterations of it in your purse. Okay, I may be getting ahead of myself here, but: jetpacks! There’s no such thing as “too excited” about this.

Martin Aircraft chief executive Peter Coker has announced that a special version, made specifically for military personnel and emergency responders ought to be ready to roll out in mid-2014, and a version available to the general public ought to come out the following year so long as you consider people with a quarter of a million dollars to burn on a toy the general public. Either way, it’s time to start saving your pennies. Or madly buying lottery tickets and hoping for the best. They’re both good plans.

(via Discovery, image via Martin Jetpack)