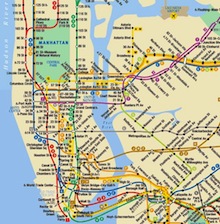 Yesterday, New York City mayor Mike Bloomberg and NYC chief digital officer Rachel Sterne unveiled an ambitious set of proposals for becoming the #1 digital city in America. Following a 90-day review of the city’s current place and progress in digital initiatives, here’s the ambitious set of objectives they’ve come up with: (via TechCrunch via Marketing Pilgrim)

FACEBOOK
Before the end of July, to launch the city’s first, “streamlined” Facebook page, and integrate Facebook sharing features on Nyc.gov, eventually creating opportunities for New Yorkers to voice their opinions, engage in discussions, ask questions and participate in citywide polls via Facebook.

FOURSQUARE
Add public spaces to Foursquare, and launch a custom Foursquare badge encouraging visits to City spaces such as parks and cultural centers.

Develop a partnership between Foursquare and NYC’s Department of Small Business Services to distribute a small business, Foursquare tool-kit for local companies.

TUMBLR
Begin training city agencies that currently use social media, working with Tumblr, in particular to build city agency pages and train them in social media design and best practices.

OTHER
Redesign NYC.gov, hosting a hackathon at the local co-work space and incubator, General Assemb.ly, to gather ideas for this effort.

While some of these services admittedly remain a little niche — how many of New York City’s 8.2 million inhabitants actually use Tumblr or Foursquare, for instance? — given the glacial pace at which so many government bodies adopt new technology and media, it’s heartening to see the city take at least them seriously. Even if one dismisses the social media channels as so much foofaraw, a good city website can make a big difference to inhabitants, and nyc.gov — which got more than 200 million pageviews in 2010 — is better than many. Of course, a spiffy online presence is not the same thing as the civic and social measures needed to effect long-term change, but considering the singularity of political will needed to get much of anything done in New York, focusing on the achievable for now seems a good start.

Road Map for the Digital City