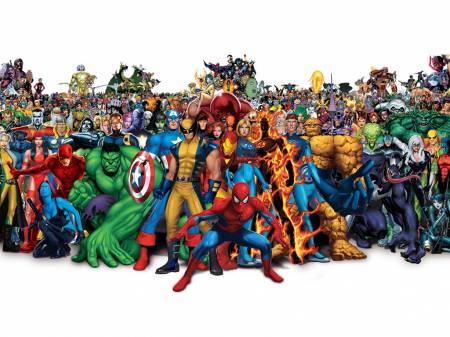 As far as superheroes go, the big studios tend to favor the ones that come with the most CGI, the biggest explosions, and the most renown.  It’s easier to get a studio to pour billions of dollars into a movie if the average person on the street has heard of the main character, Batman, Spider-Man, Captain America, or the X-Men, for example.  Big heroes, for big money.

According to CHUD.com, Marvel is experimenting to see if this is a true x=y equation: maybe smaller money could work for smaller characters.  We don’t mean like the Atom or Henry Pym –

Well, actually we do.

Marvel Studios is currently taking meetings with writers and directors to work on small scale movies based on some of their third tier characters. The movies would cost in the range of 20 to 40 million dollars (very small when we’re talking studio films) and would allow them to take risks with less obvious characters and with interesting talent.

Filmmakers are being offered their pick of characters whose names are only familiar to comic fans. Properties like Dr. Strange, Ka-Zar, Luke Cage, Dazzler and Power Pack are among the many that are being tossed around right now. And the attitude seems to be that Marvel is open to bringing any of their characters to the screen at the right price point.

You may have already guessed that my reaction to this is a positive one.  Allow me to expand.  The market has already spoken on the well made, low-budget superhero film based on a character with cult popularity.  Consider that Constantine (while not exactly true to source, it was still good fun), and both Hellboy movies were not a loss at the box office.  It is worth it to point out that if you make a good movie, people will go see it.

But I digress.  Encouraging smaller studios to pick up the B and C list characters of your comics empire will, above all else, be good for the genre.  The mainstream sees superheroes as big budget summer sci-fi blockbusters, and deservedly so, since that’s pretty much all that gets greenlighted.  It would be great if the industry could show them the private detective dramas, space epics, or fantasy-horror of the Question, the Silver Surfer, or Dr. Strange.  And if we want to play it a little safer, the absurd hyper (space) violence of Lobo. It might even help give the superhero a little legitimacy, and maybe just maybe give comics a little legitimacy too.

Come on, universe!  Give me a Captain Marvel movie with the Rock as Black Adam!  And one for Booster Gold, the Creeper, Etrigan, Top 10, and the Authority.  Please.