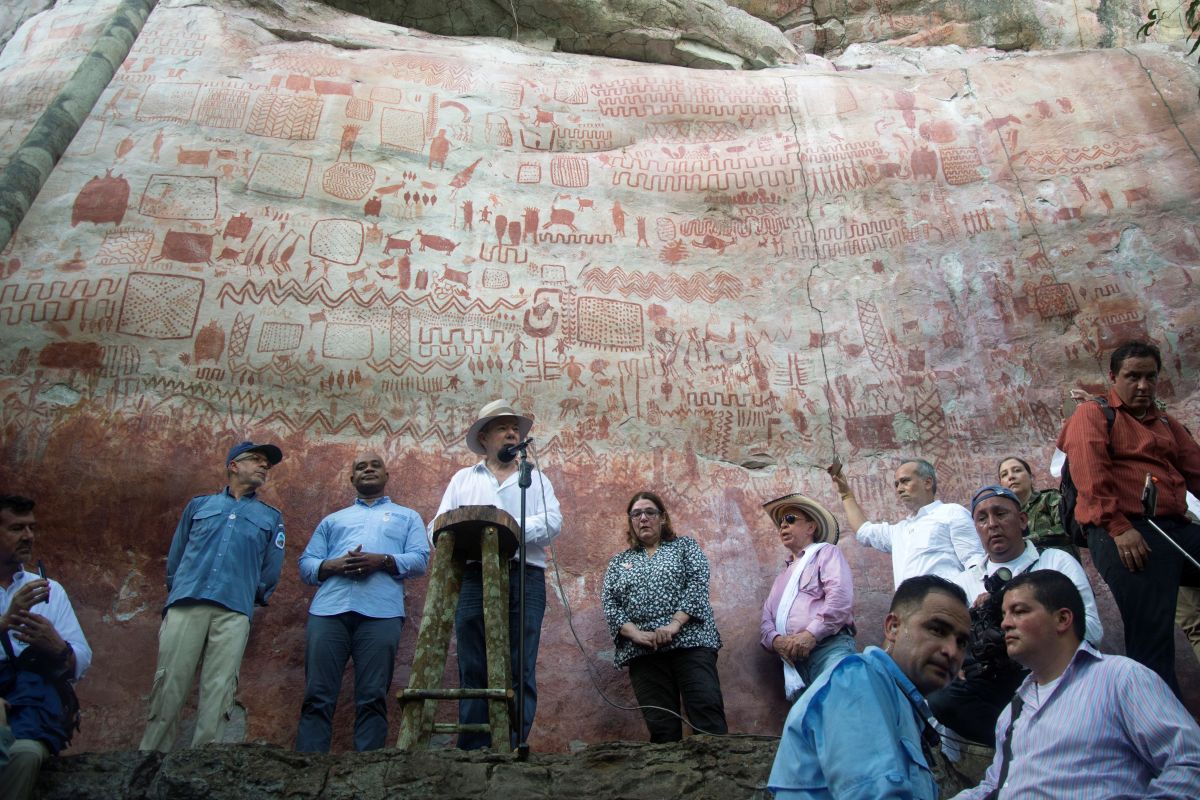 Scientists have discovered over eight miles of incredible Ice Age paintings of animals, people, and more in the Amazon rainforest of Colombia. This treasury of red ochre artwork has been called the “Sistine chapel of the ancients” and represent an incredible look at the past that we’ve never seen before.

The artwork is made up of thousands of pictures painted towards the end of the last Ice Age, around 11,800 to 12,600 years ago. The shapes include images of birds, fish, people, geometric shapes (which could be textiles, homes, or crops), and even now-extinct animals like giant sloths, mastodons, and a camelid known at palaeolama.

This amazing site was first discovered by archeologists in 2017, but the discovery was kept generally under wraps for a long time because the researchers at the site were working to make a documentary on the find, titled Jungle Mystery: Lost Kingdoms of the Amazon with the BBC’s Channel 4. There has also been a long struggle accessing the site and others like it due to political unrest and armed conflicts in Colombia.

This is not the first such discovery of this nature in the Colombian Amazon. Many of these newly-revealed are near to or part of Cerro Azul (pictured above), which was made a world heritage site in May of 2018, but the area has been closed to visitors. These new sites are different. Ella Al-Shamahi, an archaeologist on the project told the Guardian: “The new site is so new, they haven’t even given it a name yet.” Many of the friezes are in incredibly remote locations, only reachable on foot and in a jungle full of snakes and other predators.

The discovery of these amazing ancient works was made by a joint team of British and Colombian archeologists funded by the European Research Council, led by José Iriarte, professor of archaeology at Exeter University “and a leading expert on the Amazon and pre-Columbian history,” according to The Guardian. Iriarte explained the extent of the work and how much they are discovering:

When you’re there, your emotions flow … We’re talking about several tens of thousands of paintings. It’s going to take generations to record them … Every turn you do, it’s a new wall of paintings … We started seeing animals that are now extinct. The pictures are so natural and so well made that we have few doubts that you’re looking at a horse, for example. The ice-age horse had a wild, heavy face. It’s so detailed, we can even see the horse hair. It’s fascinating.

At the time these were created, the Amazon was changing and looked much different than the lush, dense forest we know today. Millenia ago when these artists used red ochre (a substance used across the globe by paleolithic and neolithic people) to adorn these rock walls, the Amazon was likely comprised of savannah, scrub brush, and some forest.

The art also may show how these ancients viewed nature and what role the spirits of these plants and animals played in their belief systems. Iriarte explained, “It’s interesting to see that many of these large animals appear surrounded by small men with their arms raised, almost worshipping these animals … For Amazonian people, non-humans like animals and plants have souls, and they communicate and engage with people in cooperative or hostile ways through the rituals and shamanic practices that we see depicted in the rock art.”

If you wish to see more about this ancient art, the docuseries on the discovery of this art and site, Jungle Mystery: Lost Kingdoms of the Amazon will hit the BBC this Friday, but the rock art won’t be covered until the second episode, which will air a week later.