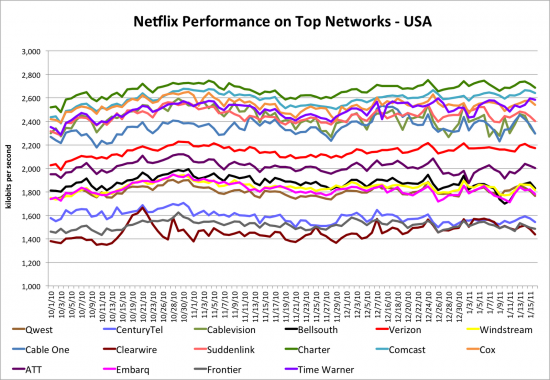 The marital spat between Netflix and the Internet service providers (ISPs) that support the popular video streaming and rental service has been strained for some time. Maybe Netflix hadn’t been doing the dishes, or they were having some trouble in the bedroom, but ISPs took it to another level when they accused Netflix of clogging up the Internet with their instant view streaming service. Netflix has now responded by vowing to release the information it gathers on ISP speeds every month from their blog. It’s the equivalent of your significant other announcing that they have compiled a list of everything you have done wrong, and will be telling all your friends.

What this means to consumers is that they finally have a carefully compiled report card for their ISPs, who do not generally release this kind of information. While everyday Internet users like you and me can use online tools to find out their individual speeds, that data has never been available in such a comprehensive manner, nor from so large a data set.

Of course, it all comes back to money. Netflix and a middleman company Level 3 are currently being asked to pay quite a bit more to push data through to customers, which Netflix believes is violating the spirit of Net Neutrality.  In addition to the passive aggressive move of posting this information, Netflix has also aired their grievances with ISPs in a letter to the company’s shareholders. From the Washington Post:

On Wednesday night, Netflix CEO Reed Hastings waded into the debate for the first time, writing in a letter to shareholders that it is “inappropriate” for ISPs to charge more for traffic to reach customers. Hastings said that even if 20 percent of all peak bandwidth is used by Netflix streaming video, the firm is paying for its traffic to reach ISPs who then deliver traffic to homes. Cable and telecom firms are using their exclusive access to customers to unfairly charge networking partners more, the firms said.

Right now, Netflix looks like the underdog. Consumers love paying next to nothing to watch movies whenever they want, and hate to pay through the nose to their ISPs. It’s a bold move on Netflix’s part to play to that discontent and give users information on exactly how well their ISPs are performing. Of course, Netflix stands to make a lot of money by keeping their operating costs low, and avoiding having to raise user costs. Whether a sincere devotion to the free and open premise of Net Neutrality is really at work here is yet to be seen.

Now if you’ll excuse me, I need to watch Cool World on Netflix. Just because I can.

(via Lifehacker and CNN Money)