It seems that just about everyone who has a Netflix streaming account these days is sharing it with a friend or family member. “I just use my parents’ account,” seems to be a common answer when asking which Netflix plan one has. Netflix seems to be aware of this, and as of a few days ago, Netflix has implemented new limitations on the number of concurrent streams allowed per account. Netflix has always had a policy by which they claimed to limit an account’s concurrent streams, which was directly tied to the amount of discs allowed out at a time on the account; one disc out allowed one stream, two discs out allowed two streams, with the maximum amount of streams peaking at four at one time. However, many Netflix users will vouch that they never had an issue sharing their account, even if they had the streaming-only plan.

Over Labor Day weekend, however, a new, stricter enforcement of the streaming limitation seems to have taken effect, limiting the amount of concurrent video streams available on one account. The only ways around this new limitation seem to be the legitimate, subscription fee ways: Either upgrade the plan to allow more disc rentals, which will also increase the amount of available streams with the cheapest option being the 2 disc $19.98 per month subscription, or simply open up a secondary unlimited streaming account, which currently runs $7.99.

This new streaming limitation comes at a time when Netflix is going through some negative changes; a recent price hike took effect at the beginning of the month, and Netflix announced that they will cut ties with Starz starting February 2012, which will cost Netflix a large amount of content.

Hopefully the little red subscription service that could and once terrified the movie theater industry will be able to forge some new deals to warrant the recent price hikes and replace the soon-to-be-missing content.

UPDATE: GigaOM is now reporting that Netflix is denying the claims that they are cracking down on multiple devices streaming video on one account, and that the error message that appeared which led people to believe that they did begin cracking down on the streaming, was simply an error: 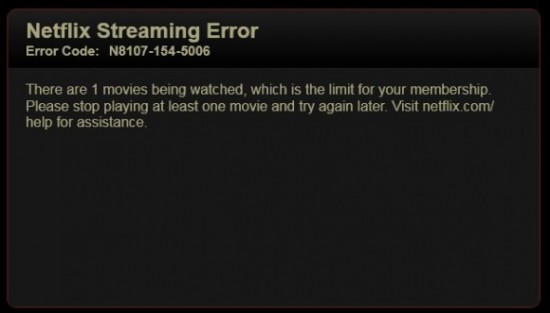 (Stop the Cap! via Techmeme, streaming error pic via Geek.com)