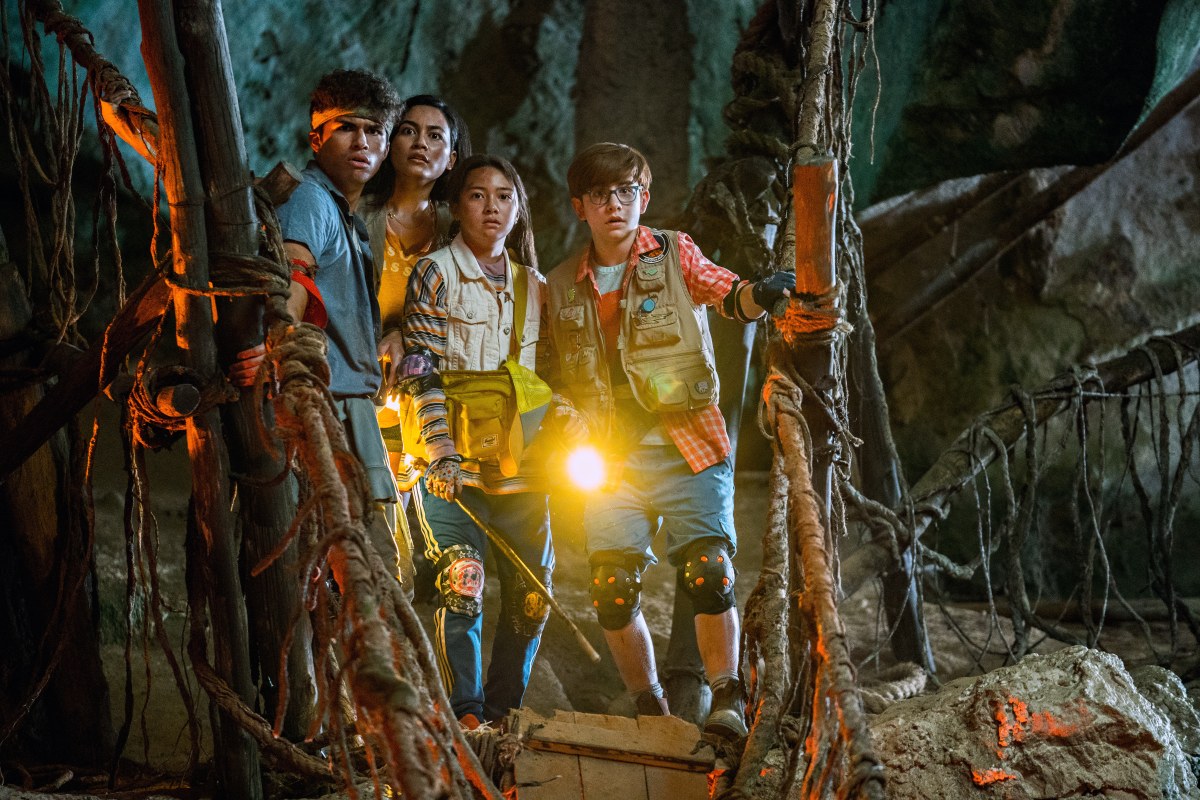 Sometimes you see a description of a movie and know, or at least hope, that it’s going to be fun. When I saw the promotions for Netflix’s latest family film Finding ‘Ohana describe it as “The Goonies but in Hawai’i” my immediate thoughts was “yes this idea is perfect, I hope they do it well.” The good news is that Finding ‘Ohana doesn’t just live up to its great premise, it surpasses it, giving us a truly Hawaiian movie with thrills, laughs, loving homages, and an incredible amount of heart.

Finding ‘Ohana follows brother and sister Ioane (Alex Aiono) and Pili (Kea Peahu) along with their mother, Leilani (Kelly Hu) as they head from the home in New York where they’ve grown up back to O’ahu, Hawai’i after their grandfather, Kimo (Branscombe Richmond) suffers a heart attack. The kids don’t want to be in a run-down house with no wifi on an island they barely know, especially Pili, who misses geocaching and her friends at home. Not even meeting a new, rather odd local friend, Casper (Own Vaccaro) or Ioane’s instant crush on neighbor Hana (Lindsay Watson) make it worth it, until Pili finds a journal that might lead her to some hidden Spanish treasure that could pay of Kimo’s bills and get the family back to New York. 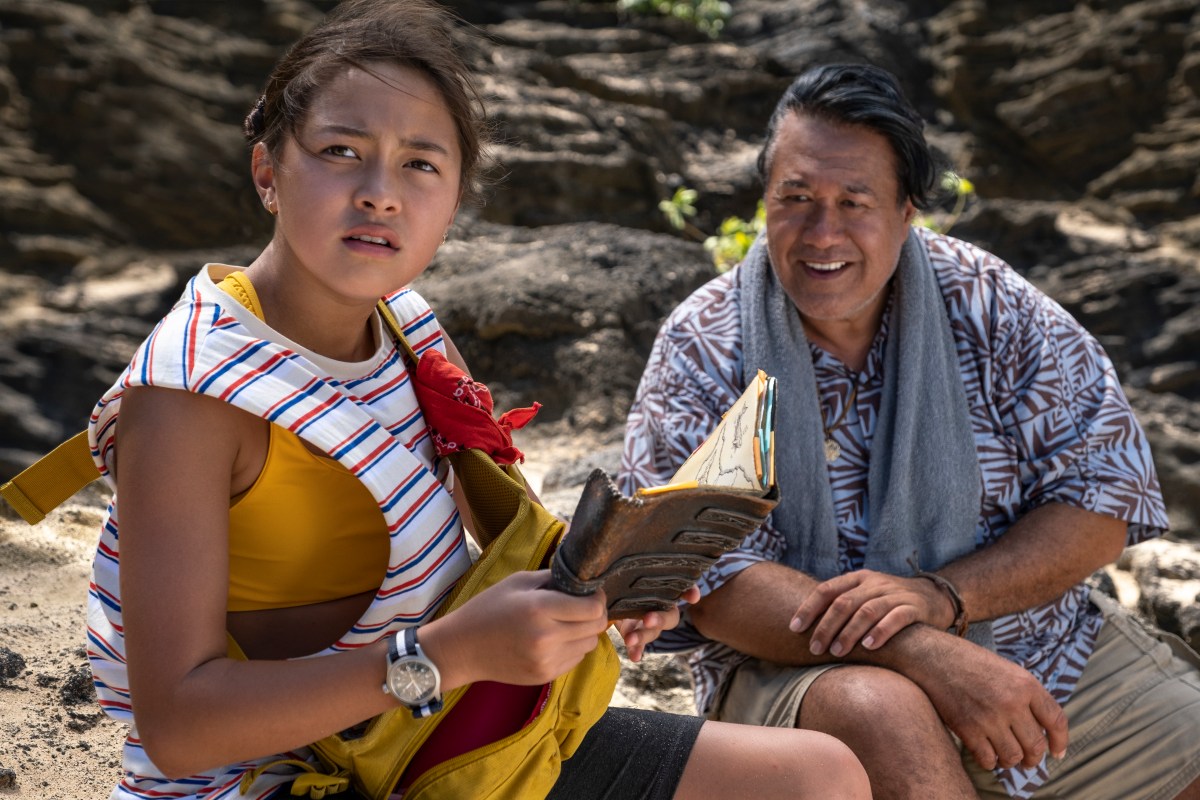 And yeah, the plot about finding a mythical pirate’s treasure to save a home that sounds a lot like Goonies. The homage is intentional, and there are lots of references to that film and other cultural touchstones like Indiana Jones and Lost throughout. There’s even a delightful appearance from Ke Huy Quan, who played Data in The Goonies and Short Round in Indiana Jones and the Temple of Doom. But the thing that makes Finding ‘Ohana special and more than a homage is Hawai’i and the deep love and respect the filmmakers clearly have for the Islands and the people that call them home.

Full disclosure here, though I don’t think this is controversial: I love Hawai’i. It is one of my favorite places on earth and has a huge place in my heart. I’ve been lucky enough to visit a lot of the places on O’ahu where Finding ‘Ohana was filmed, including Kualoa Ranch and so just watching this movie made my heart ache for that incredible place. The setting is used incredibly well, and watching feels like a little mini-vacation, just with slightly more danger and hidden pirate gold. And Lost jokes.

But Finding ‘Ohana is not just about Hawai’i the place, it is about being Hawaiian and what that means. It’s about two young people discovering their heritage and culture. Finding ‘Ohana is about the treasure of knowing who you are and where you came from and finding where you belong. It’s a love letter to Hawai’i and to native Hawaiian culture, and it’s done with such deep respect and love. This movie is Hawaiian down to its (molten?) core, and that kind of representation of native cultures is still so rare.

From the language to the sets, to the food, this movie is authentic. But most importantly, that shows in the cast. Nearly every main actor is of Indigenous Hawaii and/or Asian descent, like most of the population of Hawaii. In fact, there’s only one white actor in the main adventure, Owen Vaccaro (who is allowed because he was great in The House With A Clock In Its Walls, another favorite in our home, and Casper). The only other white faces we see are asshole pirates in flashbacks, and they’re played by Marc Evan Jackson and Chris Parnell, so again, we’ll allow it. 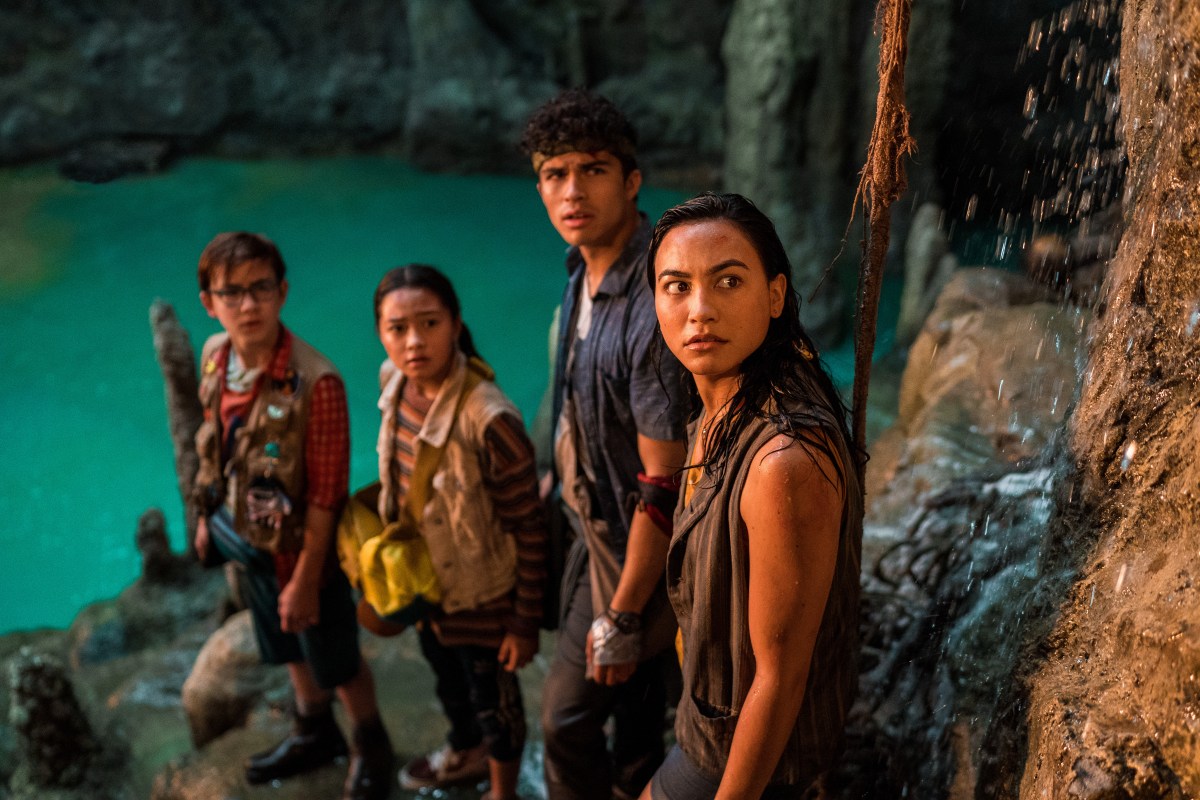 Everyone else is Hawaiian and that matters, and it’s important to the story and the success of the film overall. It also helps that the cast is incredible in the film. Richmond and Hu are great as estranged father and daughter, and they have some incredibly moving scenes together. Aiono and Watson are great as the older members of the adventure parties and Aiono especially does well with both comedy and playing a big brother learning to protect his sister. But the real discovery here is Kea Peahu, who carries the entire film, just like Sean Astin in Goonies. She’s feisty, funny, smart and so engaging to watch and I can’t wait to see more from her.

Writer Christina Strain and director Jude Weng so clearly love and understand the movies they are homage-ing, and it comes across in every frame of Finding ‘Ohana (and yay for two BIPOC women getting the backing to make a meaningful movie—Netflix has been doing well on this front). What truly makes this film extra special is how clearly they know and love Hawai’i. As anyone who has memorized Lilo and Stich knows, ‘Ohana means family. But like many words in Hawaiian, it’s more than that. It’s connection and heritage and respect, and that’s truly what this delightful film finds.