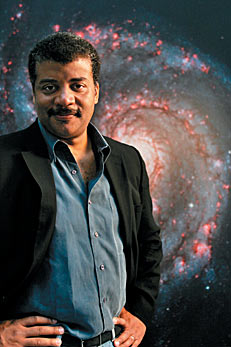 Neil DeGrasse Tyson is the director of the Hayden Planetarium at the American Museum of Natural History, and one of the Daily Show’s favorite people (judging by the number of times he has been interviewed on the show).  He’s also one of our most favorite science geeks.

He will be appearing on the show again tonight, most likely to talk about this week’s premiere of his NOVA documentary The Pluto Files, chronicling the declassification of Pluto as a planet.

His interviews always remind us to be excited about science.  But don’t take our word for it.  We’ve embedded his last Daily Show guest spot after the jump.