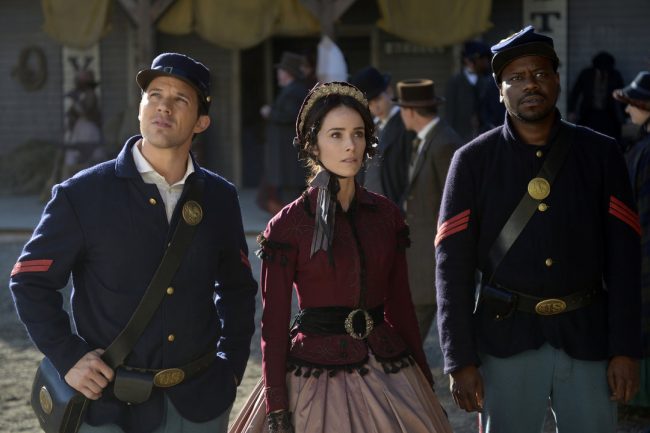 In a twist that’s oh-so-fitting for a time travel show, NBC’s Timeless has been un-cancelled. The series was originally cancelled three days ago, despite its okay ratings, but strong fan reaction and some negotiating from Sony Pictures Television has resulted in a renewal, with Season Two airing some time in 2018.

Even before the #RenewTimeless Twitter campaign, Timeless and its Time Team showed early signs of a robust fanbase. For example, 49% of the participants in USA Today’s Save Our Shows poll wanted the show back for a second season. (That said, the two runners-up were the currently-in-limbo Elementary at 48%, and the recently cancelled Last Man Standing at 36%, so these voters don’t always get what they want.)

According to The Hollywood Reporter, Sony Pictures Television, which produces the show, played a significant role in getting NBC to renew. Their sources say that Sony Pictures Television “had been offering the lion’s share of the profits to NBC in exchange for the renewal” since they “believe in the show’s creative and that it has a solid chance to be a long-running, family-friendly franchise.”

Given that Eric Kripke previously created the ridiculously, unexpectedly long-running Supernatural, he’s not exactly a bad bet for creating a slow-to-build sleeper hit.

Kripke and co-creator Shawn Ryan both tweeted the un-cancellation update, along with their current information about the air date.

The #TimeTeam went back 3 days, and changed history. @nbc picked us up for 10 episodes. Seriously. Airs next summer. #TimelessRenewed pic.twitter.com/SDkeShlByL

Correction. Info moving fast. We’re airing sometime in 2018, not sure when. But we’re airing! #ResuscitateTimeless https://t.co/ApuV5KRWxl

Being told by @NBC timeslot undecided. Will be spring or summer of 2018 though. #TimelessResuscitated

They also tweeted their appreciation for the fans who made renewal possible.

So huge thanks to @nbc for supporting us. And THANKS for the fan support. It’s a MAJOR reason we’re back. It worked, guys! #TimelessRenewed

Can’t thank the #Timeless fans enough for fighting so hard for us online and spreading the word about the show. Can’t wait to show you more.

Were you one of the fans who hoped for a Timeless renewal? I’ve personally never seen the show, but this campaign at least has me intrigued.

(Via Deadline, The Hollywood Reporter, and io9; image via Sergei Bachlakov/NBC)