Give Leslie all the commentator jobs. 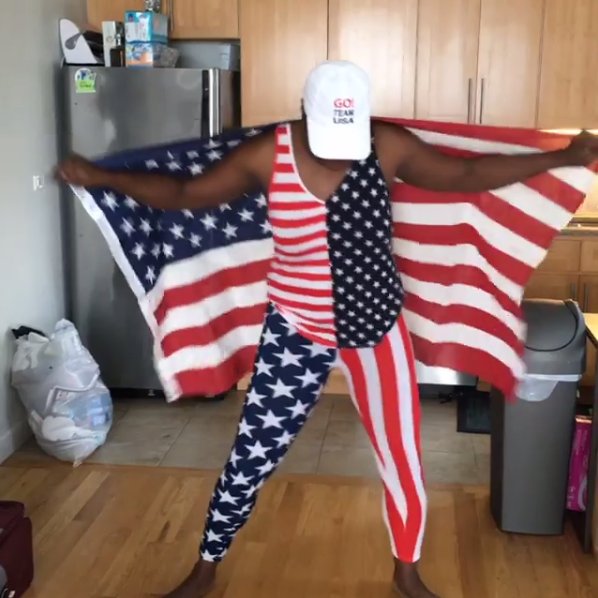 The Rio Olympics has been gluing audiences to their couches this weekend, but there’s likely no one more excited to root for Team USA this year than Leslie Jones. The actress and comedian began posting to her Twitter account as soon as she had the opportunity to watch the opening ceremony–and ever since then, following her Twitter feed is providing us with hilarious first-hand commentary on several of the first Olympic events, including the men’s cycling road race, men’s gymnastics, swimming and women’s beach volleyball:

Way ahead the world record pic.twitter.com/ps3Op3nOLT

Three kids a medal for each kid better watch out Kerry you will get that fourth one pic.twitter.com/tIpq3Fy3xl

Well it was real y'all see y'all tomorrow!! pic.twitter.com/0D9FHhpz1H

It’s not the first time Jones has provided hilarious commentary; she’s also known for her live-tweeting of shows like Game of Thrones. But Jones’s Olympic commentary isn’t just funny; she’s cheering on these athletes and celebrating them for their strength (I think I’m going to take her praise of volleyball player Kerri Walsh Jennings as my new personal mantra: “So. Damn. Warrior.”)–and not only did her Twitter followers cite her enthusiasm, but she also earned notice from NBC themselves, the network broadcasting the Olympics in the U.S. NBC executive producer Jim Bell eventually tweeted to Jones inviting her to Rio:

Based on the exchange, it looks like Jones is going to be connecting with someone from the NBC camp–and while she hasn’t confirmed she’ll be heading to Rio yet, maybe she’ll be made an unofficial local correspondent?