Natalie Morales Calls Out Slimy, Sexist Upskirt Photographers: “You Cannot Tear Me Down”

"What a disgusting, horrifying job you have." 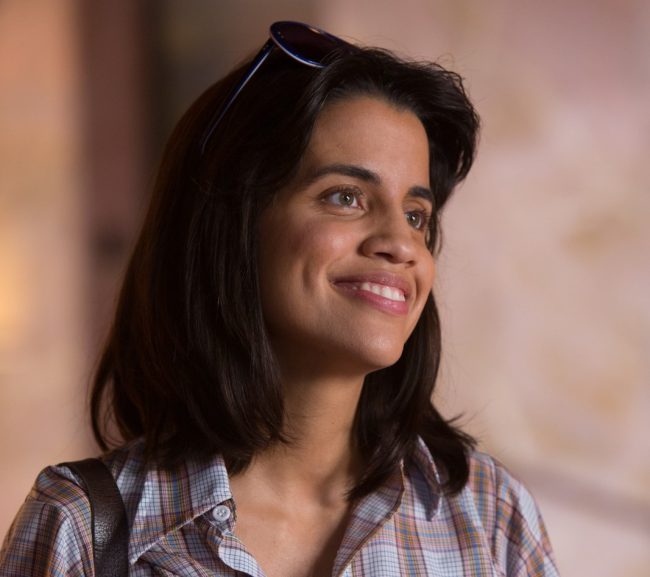 Natalie Morales refused to be shamed after some horrifically creepy photographer angled their camera to take the most invasive, upskirt photo possible of her at the Battle of the Sexes premiere. That photographer then offered their manufactured “wardrobe malfunction” photos to a publication, and they were forwarded to Morales.

Her response was savage, timely, and true. First, she tweeted an in-the-moment response which ripped into the photographers for coming to the premiere to “try and exploit my body,” on a night which should have been “one of the happiest moments of my life.”

.. which was one of the happiest moments of my life thus far. These are pictures they PURPOSELY took up my skirt TO GET A SHOT of my vag 2/

So you’re gonna come to an event that I’ve waited my whole life for, that I’m super proud of, to try and exploit my body? For your gain? 4/

I’m there to promote my movie, you’re there to take pics you can sell. Pics I’m POSING for, that I’ve agreed to. 6/

It’s a high-ass slit because I like the way my leg looked & I wanted to get me some of that Angie look, but I wasn’t showing you my bits 8/

But YOU should be. What a disgusting, horrifying job you have. 10/10

She then tweeted a full statement as an image, which reads, “When I was sent the photos, my first instinct was to ignore them and move on. But then I realized this must happen to women all the time, and this time, I am not going to let it slide. I am not going to let that photographer or the people that buy their pictures continue to believe that it’s ok. It’s not ok. This photographer, not unlike the ones that wait outside of the cars female celebrities are getting out of just to purposely take pictures up their skirts, angled their camera to see up the slit of my dress. Even if they wanted to claim this was an accidental shot, they could have done what they would have done had they taken an accidental shot of their daughter’s, mother’s, or sister’s vagina: deleted it.”

“Instead, they sold pictures they took of my private body parts – without my consent – to a site that makes money off trying to embarrass me. For just existing as a human being. For having a body and body parts under my clothes. This is not, at its root, a “celebrity” problem. This is a problem with how we tear down women and reduce them to a sum of body parts, to be at once sexualized and shamed. Sure, it’s most visible because I happened to be doing my job on a red carpet, for a publicized event; but this happens every day, to women all over the world. We are held to an impossible standard, where our bodies and our faces must be perfect and if for one second we are in any way human, like say, just walking around, doing our jobs – we are torn down. Well, you cannot tear me down. For the record, I was wearing underwear. You can’t actually see anything. But if you could, I wouldn’t be embarrased. It’s a vagina. We all come out of one. It’s nothing to be ashamed of. But it doesn’t belong to you. It belongs to me. And you can’t have it unless I say you can.”

Before this gets watered down or the word “vagina” gets censored out, here’s my statement on this “wardrobe malfunction” b.s. pic.twitter.com/nE6CNAsovB

It’s gross that Morales even has to comment on something like this, but it’s so important and inspiring that she blasted this sexist, exploitative behavior for what it is. Upskirt photos aren’t “celebrity” business; they’re the products of a culture that shames women for having bodies, even when it is quite literally part of a woman’s job to show up and be photographed. But because she dares to appear in public, she’s supposed to accept invasive, disgusting photos as a hazard that’s just “part of the job.” Just as when women writers are sent rape threats on the internet, or when women creatives are harassed at comics conventions, these sexist attacks are brushed off as “part of the job.”

Morales clapped back at that logic by pointing out that this isn’t normal, it isn’t okay, and it shouldn’t be “part of the job” for anyone. It isn’t the responsibility of women to deal with sexist, invasive behavior. Instead, it’s the responsibility of sexists to act like moral adults and stop.

(Via Jezebel; image via Fox Searchlight)