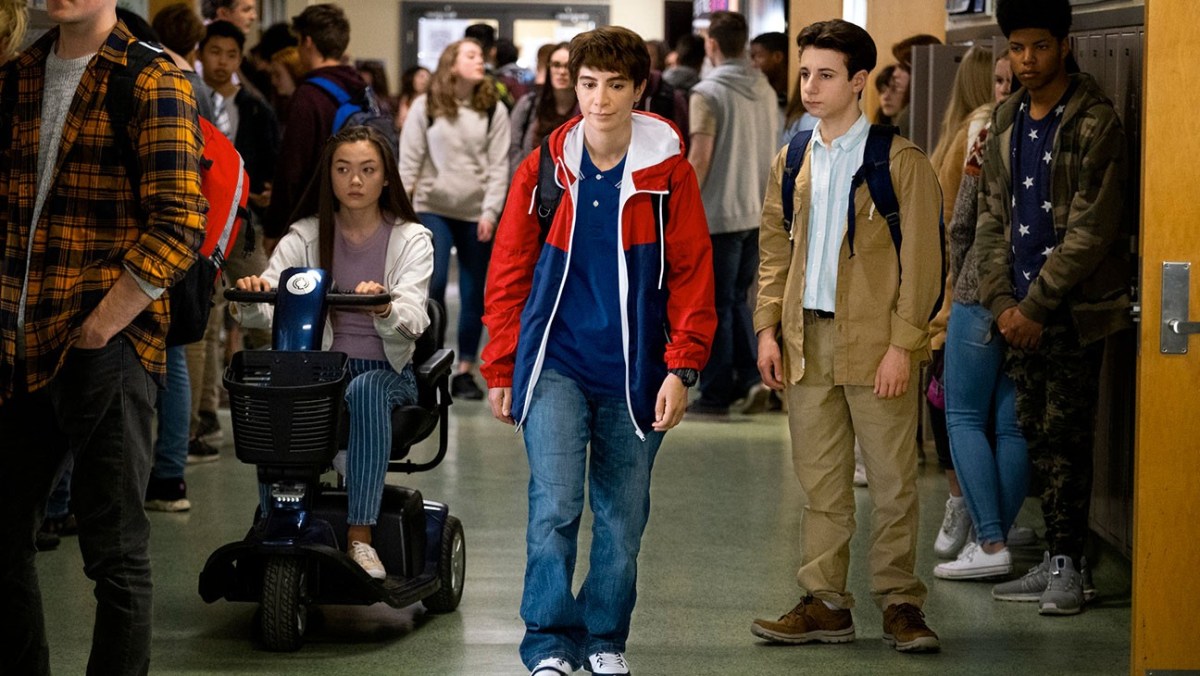 New TBS series Chad is the coming-of-age story of a young boy who is trying to find his way as an American teenager coming from an immigrant household. Lost in trying to fit in with the “cool” kids at school, Chad is trying to find the best way to fit in, and it doesn’t always work out for him.

Starring Nasim Pedrad as Chad, the show is a cringe-worthy journey through adolescence that shares a beautiful look at trying to understand who you are. Getting to talk with Pedrad about creating the show and the character of Chad, she clearly wanted to bring to life her own experience as a child of immigrants while setting the show in the modern era.

THE MARY SUE: Chad’s a very fun character in general, not even getting into the full aspect of the whole show. And so when you were creating Chad as a character, what kind of drew you into him and his mannerisms and everything that kind of ended up being what we see on the show?

NASIM PEDRAD: Well, I knew that the buy-in of a grown woman playing a teenage boy, in order for that to land, it would be imperative that I be able to disappear into the character and feel as far away from myself as possible. And so I felt like I could just, with the help of a wig and the eyebrows and the posture and the binder under the shirt and all of that, I felt like I could really disappear into looking like a little dude and that all of those, you know, components with hair and makeup coming together would also help me in the performance feel like I’m disappearing into the character.

And again, getting as far away from myself as possible. So we started from the outside in. And once we landed on the wig and some of the physical components, I would then just sort of improvise as the character to find his speech patterns and the way that he kind of stumbles over certain words and his vocal register. And it was kind of a very fun evolution that I got to have as I was beginning the writing and then from the verbal and behavioral developments, little by little, I started to put together what was really making me laugh about the character. And then from that build out his point of his pathology, so to speak.

THE MARY SUE: Yeah, and I think with Chad as a character, in particular, is such an interesting way of telling for lack of a better term, a coming-of-age story, because he is just this teenage kid in the 21st century. And what I really liked about the show was the K-pop episode and how it was very much like “Yeah, those are the teenagers on the internet right now. That’s all they’re obsessed with.” But like with coming into this and making this coming-of-age story, was it difficult, or was it just one of those things where you were looking at teenagers today and kind of telling that story through their lens?

NASIM PEDRAD: I mean, the show is obviously incredibly personal to me and I love writing about adolescence. Mine happened to be very awkward, so I tend to write about awkward adolescence. And in addition, I really wanted to write something that felt honest to my specific experience growing up as an immigrant kid in this country. So I would say in that regard, it’s entirely a bit of a blueprint of my own childhood, but I also decided to set the show in the present day.

So, you know, to speak to what you were just talking about, the show does explore everything from masculinity, sexuality, and racism, and Chad is sort of this natural vehicle to explore those things because he’s also an outsider trying to figure out what it means to be an American boy today. And just everything from the uncompromising pressure to be a bro. The pressure of living under this microscope within the age of the internet and where everything is being recorded and this never-ending exposure kids get with the internet and having this constant stream of information, there are certain things that are so specific to this particular generation that I actually thankfully didn’t have to deal with when I was Chad’s age. But it was really important for us to get that right. You know, because I do think that kids today do have a unique set of challenges that just kind of add another layer to what is already such a horrifying time in our lives.

You know, where the stakes feel like they have life or death circumstances. You’re in just a precarious age and everyone can relate to that, right? What it’s like to be at that age, where all you want to do is to fit in, but then to think of the role, again, things like social media play into that equation for kids today to just be inundated, for example, with these curated and often misleading images of what other people are up to, the way that you are on social media, it just seems like its own distinct Hell. So it’s everything I had to deal with and then some, yeah.

THE MARY SUE: With a show like Chad, it does have this unique perspective because it is coming from a place that is very close to you, but coming through a lens of the modern teenager. So what do you hope audiences take away from the show?

NASIM PEDRAD: For anyone that’s survived adolescence, I hope that, rather than re-traumatize them, the show lets them revisit some of the pain of that time now with a lens of comedy, rather than the debilitating fear we all had when we were experiencing it in real-time. I think it can be healing to laugh at things. And so for anyone that feels like they can relate to Chad, hopefully, they get something out of being able to laugh at how ridiculous he is and laugh at how, you know, terrifying this thing that we survived was.

I think it’s incredible to be able to be on the other side of it now. I hope people watch the show and either relate to him either in themselves or someone they knew in high school and that they found something human and funny and specific in this character that allows them to connect with him on some level. I think the themes we explore in the show are so relatable and universal. Yes, he’s an immigrant kid, but everyone can relate to the notion of wanting to belong at that age, you know?

As painful as it is to see him suffer through some of this, which hopefully it’s more funny than it is painful, which is why I had me, an adult, playing this part. That was the whole, the origin story of what got me excited about this show was that I just thought you could push the comedy so much further if you had an adult playing Chad who can bring that perspective and distance from that era to the role, you know, funny moments can be funnier and less sad because you’re not sitting there laughing at an actual Iranian child. You’re laughing at an adult who, you know, has some distance from it. So it’s like this, I thought it was just this fun experiment where we’re all like in on this joke together and you can actually laugh at some of these horrifying moments rather than feel bad for the child actor that’s playing them, that’s playing them out.

I think there’s something to be said for those of us that have survived adolescence and even survived it with a great deal of adversity. Because it does toughen you up. For me, it gave me my sense of humor and it forced me to develop other skills that were useful to me since, you know, the inherent or the traditional notions or markers of what it meant to be cool, I happened to not possess.

Chad airs on Tuesdays on TBS.