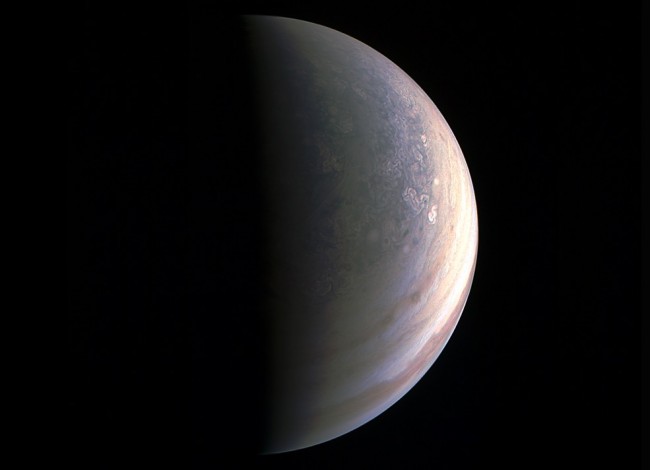 We were excited when New Horizons gave us a look at Pluto like never before, but there are plenty of other planets that we could still stand to take a closer look at. The Juno space probe is currently orbiting Jupiter, and the images it has sent back are impressive—and not just because they’re the most close-up ones of the giant planet to date.

Above, in a picture snapped just two hours before Juno made its closest approach to Jupiter on this particular orbit—it’ll orbit the planet 36 more times before crashing into Jupiter in February 2018—we can see Jupiter’s pole, which NASA says is “unlike anything encountered in [the] solar system.” The pole has never been imaged before, and we now know it to contain “storm systems and weather activity unlike anything previously seen on any of our solar system’s gas-giant planets.”

We’re also mostly used to seeing a very brown and orange Jupiter, but the pole actually has a bluish hue that’s not caused by the planet’s aurorae, which don’t fall in the visible light spectrum. Juno did image the planet’s southern aurora, though, in the infrared spectrum, where the previously invisible—and never photographed—phenomenon is suddenly impossible to ignore. NASA also translated the radio emissions from the aurorae into sound if you want to listen to Jupiter’s blood-curdling scream.

“Jupiter is talking to us in a way only gas-giant worlds can,” said Bill Kurth, co-investigator for the Waves instrument aboard Juno that uses radio waves to peer below Jupiter’s clouds and figure out what’s going on beneath them.

(via NASA, image via NASA/JPL-Caltech/SwRI/MSSS)