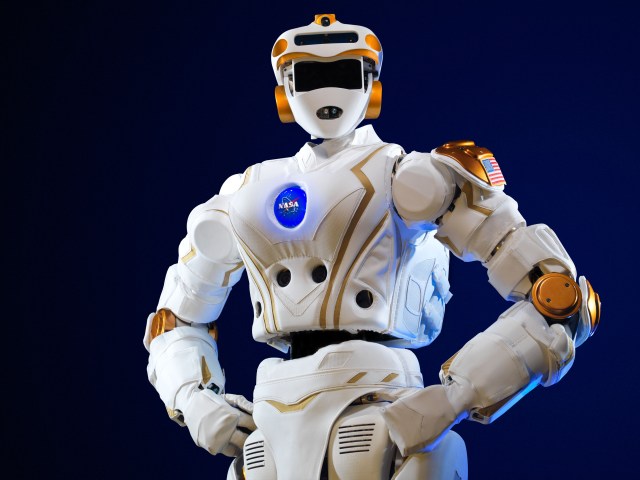 Not content to let robots rule merely the Earth, NASA will help them reach for the stars above, as well. To that end, they’ve given the “Valkyrie” robot to MIT, so they can play around with it and work on algorithm for eventual trips to Mars.

At six feet tall and 290 pounds, the humanoid robot has a superhero-like stature—or maybe it’s the glowing emblem in its metal chest. MIT’s Valkyrie is one of two given out by NASA, with the other going to a team at Northeastern University in Boston, Massachusetts, led by principal investigator Taskin Padir. Steve Jurczyk, associate administrator for the Space Technology Mission Directorate (STMD) at NASA Headquarters in Washington, said,

Advances in robotics, including human-robotic collaboration, are critical to developing the capabilities required for our journey to Mars. We are excited to engage these university research groups to help NASA with this next big step in robotics technology development.

The two groups will receive up to $250,000 in funding each year for two years as they work to compete in NASA’s Space Robotics Challenge Centennial Challenges Program, which will involve both software simulations and tests of the physical bot’s dexterity. The more dexterous the bots become, the more autonomous they can be in space, which can free up human astronauts to do other things like the ISS’s “Robonaut” already does to an extent.

We look forward to all the fun space exploration the teams’ developments enable—that is, if the robots give us permission to participate.