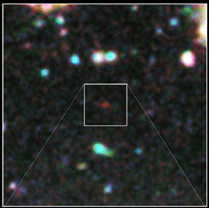 13.2 billion light-years away resides what could very well be the most distant object ever seen in the universe. Caught in Hubble’s 2009 Ultra Deep Field snapshot, the infant galaxy appears red due to the stretching of photons caused by the universe’s continuing expansion.

The galaxy pictured was formed just 480 million years after the Big Bang, and is 100 times smaller than our own Milky Way.

“We’re peering into an era where big changes are afoot. The rapid rate at which the star birth is changing tells us if we go a little further back in time we’re going to see even more dramatic changes, closer to when the first galaxies were just starting to form.”

The Hubble Deep Field image was a result of pointing the telescope at a single, seemingly empty, spot in the cosmos for ten consecutive days. The most recent Deep Field image was taken over the course of 4 days using Hubble’s new “Wide Field Camera 3“, which collects light from near-infrared wavelengths to unearth objects not observable in the visible light spectrum.

2014 marks the launch of Hubble’s successor, the James Webb Space Telescope, which will be able to discover objects even more distant.