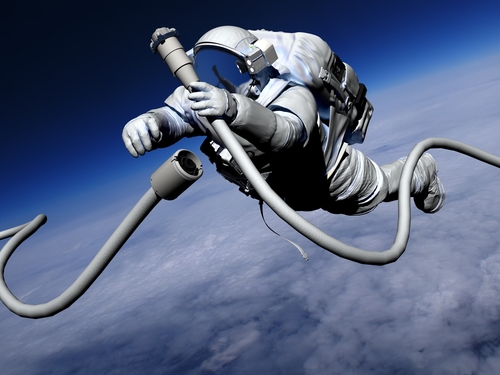 “Wait, this is supposed to carry what to where?”

Back in second grade, I read How Do You Go to the Bathroom in Space, a book about practical life as an astronaut. I remember absolutely poring over every detail of that book, learning about what daily life must be like as an astronaut. It didn’t just cover bathroom things, but food and other practicalities, too. That being said, that book is legally an adult now, and while it’s seen several updates in later editions, another one might be called for as NASA’s “Space Poop Challenge” (I kid you not) has just ended, with an inventor developing a brand new way for astronauts to poop while wearing those big ol’ spacesuits.

The challenge arose out of a need for, uh… waste management during launch and other travel procedures. According to the challenge’s description, “[an] astronaut might find themselves in this suit for up to 10 hours at a time nominally for launch or landing, or up to 6 days if something catastrophic happens while in space.” Normally, astronauts wear diapers when they expect to be wearing a suit for an extended amount of time, but as anybody who’s handled a messy diaper before, that’s really only a one-off temporary solution. After the fact, a diaper poses even more of an interesting challenge as there are unique restrictions and possible catastrophic complications that can arise from having a leaky diaper in space. (All that sensitive equipment… yuck.)

Family physician and Air Force flight doctor Thatcher Cardon took home the grand prize of $15,000 with his “MACES Perineal Access & Toileting System”—or M-PATS for short, because it wouldn’t be a NASA invention if it didn’t have a complicated-ass (heh) acronym.

Dr. Cardon told NPR that he used a lot of his experience as a doctor to inspire his design. “I thought about what I know regarding less invasive surgeries like laparoscopy or arthroscopy or even endovascular techniques they use in cardiology—they can do some amazing things in very small openings.” He hinged his design on one thing: not storing the waste in the suit. (Here’s where I imagine every single astronaut breathed a sigh of relief.)

So, in the interest of making sure the waste vacates the suit, Dr. Cardon designed “a small airlock” located at the suit’s crotch, through which astronauts can extract things like inflatable bedpans and diapers after they’ve been used. As NPR points out, “His design even allows an astronaut to change underwear while inside the spacesuit, through the same small opening.” Handy if microgravity (or zero-gravity, depending) goes wacky while you’re busy setting up your squatty potty halfway between here and the Moon.

Honestly, all the designs featured in NPR’s report look intriguing, and like they might be soon one day featured in an exhibit in the far-flung future about how primitive humans handled pooping in space. Special mention goes out to the wired-up body-hugging powered garment that looks a bit like a colostomy bag strapped to your thigh. It compresses and sanitizes the waste for you, for your on-the-go urination!

(via Forbes, image via Shutterstock/iurii)