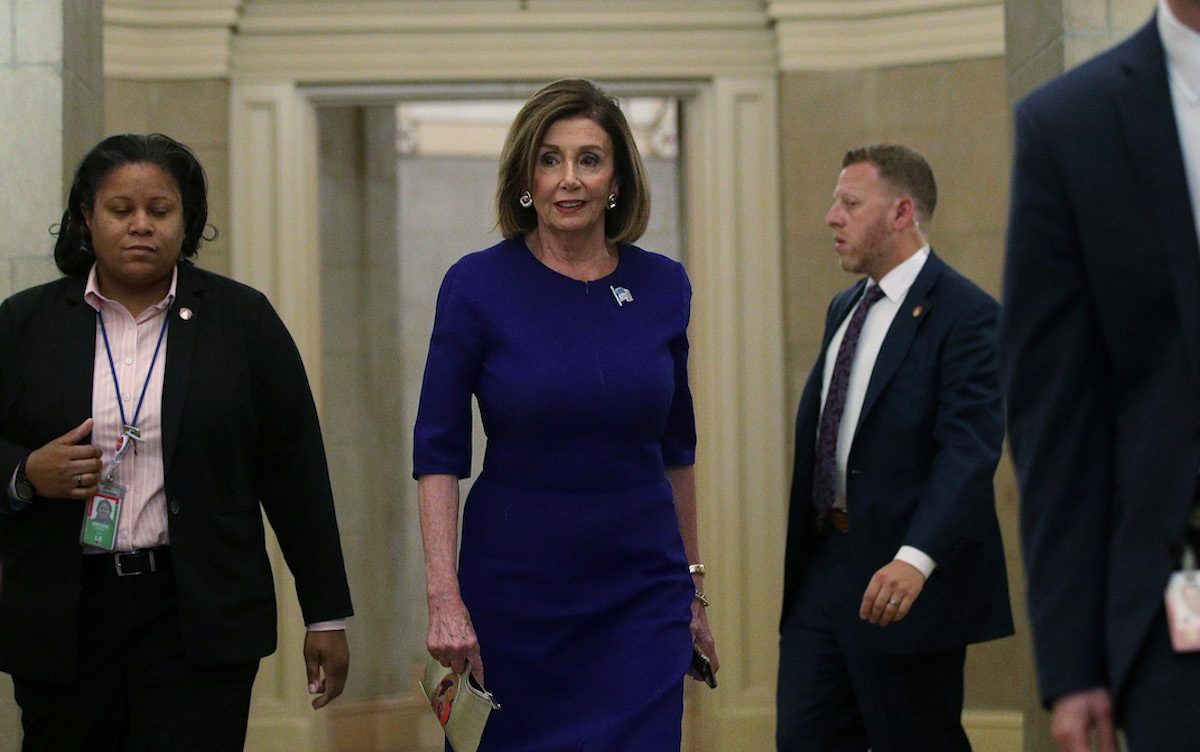 “The president must be held accountable; no one is above the law.” https://t.co/WZnIWjR7tP pic.twitter.com/fAM81LJUju

We’ll update once this does or doesn’t happen but for now, there is an exciting rumor spreading through DC. According to numerous reports based on a range of sources, Nancy Pelosi will be announcing the start of a formal impeachment inquiry into Donald Trump later today.

Very solid #Dem House leadership source just confirmed to me that @SpeakerPelosi will announce a formal impeachment inquiry this afternoon and imply that she herself favors impeachment of @realDonaldTrump.

Woke up to text from senior Dem House staffer: “The dam has broken here. We’re going to impeach.”

I don’t want to get my hopes up because we’ve all been hurt here already. But this does feel different. For one thing, Pelosi is seeing immense pressure from within her own party. On Monday night, seven freshman members of Congress, all of whom have experience in the military or in defense or security intelligence agencies—published an op-ed in the Washington Post. They write that if the allegations against Trump regarding his attempt to persuade Ukraine to investigate Joe Biden’s son are true—and he has admitted they are—then they “believe these actions represent an impeachable offense.”

More than two-thirds of House Democrats are now saying they support impeachment proceedings—and that number continues to rise.

So is Pelosi finally going to begin impeachment proceedings? We can continue to hope. For now, though, she still refuses to say the actual word.

Pelosi declining to say too much on impeachment at Atlantic Festival, noting she’ll make a statement at 5 p.m., but here’s a preview:

There is already an impeachment inquiry happening in the House Judiciary Committee, led by Rep. Jerry Nadler. But a whole lot of Democratic lawmakers see Trump’s latest scandal with Ukraine as a tipping point, requiring action from Pelosi.

To be clear, Trump’s conversations with Ukrainian President Volodymyr Zelensky are not separate from the existing allegations of obstruction of justice and abuse of power covered in the Mueller report. They’re more like a sequel to those allegations. And in both cases, Trump admitted to some pretty terrible things as if they’re totally normal. He admitted to being open to letting Russia influence the 2016 election, just as he admitted to trying to get the Ukrainian government to dig up dirt on Hunter Biden.

What Trump hasn’t admitted to (yet) and has so far denied is that he threatened to withhold aid money already appropriated by Congress unless Ukraine helped him go after a political opponent. Seeking foreign influence in an American election is bad enough, but this kind of extortion, if true, is what those freshman Democrats called “an impeachable offense.”

If you’re ever tempted to give up on your dreams, remember that a pudding-brained septuagenarian tv host got away with a Watergate then did a bigger Watergate

According to the Washington Post, Nancy Pelosi is planning to announce an impeachment inquiry later today after a closed-door meeting with her Democrat caucus. You can be sure we’ll be keeping an eye on this.