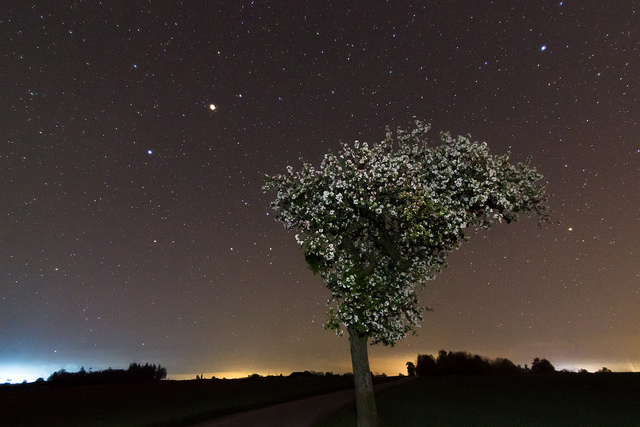 Do you love stargazing? Do you also love sleep? Well, one of those loves is gonna have to go – at least for one morning this month. For the next thirty days, you’ll have a chance to see all five planets visible to the naked eye all lined up in a row for the first time in ten years.

Starting this morning until February 20th, the naked-eye planets – Jupiter, Saturn, Mars, Venus, and Mercury – will all be visible in the sky together just before dawn. Just look East! This is the first time they’ve all lined up like this since January 2005! In addition to the planets, you’ll also get a great view of the star Spica, which will also be in view (you’ll be able to recognize it by its bluish tint).

Now, the trick to catching all five is to check it out when Mercury is visible, but before it starts getting washed out by daylight. Jupiter comes out mid-evening and pretty much stays out all night. Saturn, Mars, and Venus follow, and then Mercury barely comes up over the horizon to make an appearance before sunlight appears. So, timing is key. Mercury’s rise time depends on when “dawn” is where you live and can be as much as an hour and a half to two hours before dawn. Although it’s visible to the naked eye, Mercury can be easier to find with a pair of binoculars. If you look at Jupiter with those same binoculars, you’ll be able to see its largest moons—Io, Europa, Ganymede and Callisto.

Want something else to look at now that you’ve gone to all the trouble of getting up early? Check out NASA’s ISS Spot the Station to try and predict when the International Space Station may also come into view.

I know, I know. Mornings aren’t your thing (they’re not mine either!). But don’t fret, my pets! This awesome little astronomical miracle will be happening again in the summer when those planets will be visible in the Western sky in the evenings: August 13-19, 2016. If you’re in the Northern Hemisphere and you wait until then, you’ll be at a bit of a disadvantage, as Mercury and Venus will be harder to see against our dusky sunsets. The Southern Hemisphere will have a much clearer view during our summer…but then they’ll be the ones dealing with cold weather.

In any case, we’d love to hear if any of you actually get up and check out the solar system getting the band together (sorry Uranus and Neptune – you weren’t needed for this tour!). Let us know if you had luck spotting them – or better yet, share photos! – in the comments below!

(via Gizmodo, image via H. Raab/Flickr)