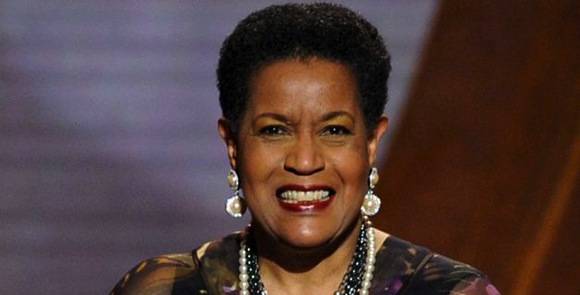 Today is Inauguration Day in America, when President Obama will be sworn in for his second term. It’s also, as chance would have it, Martin Luther King Jr. Day. So it’s a good time to get to know Myrlie Evers-Williams, a civil rights leader, former chairperson of the NAACP, and—as of today—the first woman to deliver a prayer at a presidential inauguration.

Evers-Williams is the widow of civil rights leader Medgar Evers; together, the pair of them were instrumental in the civil rights movement during the ’50s and ’60s, organizing voter registration drives and demonstrations and working toward the desegregation of schools. Evers was shot to death by a white supremacist in 1963; though two all-white juries failed at the time to convict his killer, Evers-Williams worked for three decades to bring him to justice, and in 1994 Evers’ killer was arrested and convicted.

After the death of her first husband, Evers-Williams continued to fight for the cause of civil rights, running for Congress and remaining active in the NAACP, of which she was elected chairperson in 1995.

Said Evers-Williams in an interview with MSNBC’s Al Sharpton about being chosen to deliver the invocation:

“I’m just so appreciative, so thankful. It’s an honor that never thought that I would even come close to receiving, because in the March on Washington, I was scheduled to speak then… I was in Boston [and] could not get to Washington, DC in time and missed that marvelous opportunity. And for years I thought, I’ll never be able to do anything like that again. And here we are 50 years later, I have been asked to deliver the invocation for President Obama’s second term as President of the United States. It’s something that—it’s difficult to explain. I’m simply honored, I am delighted, I feel even more of American now than I think I did when Medgar was buried at Arlington Cemetery.

Evers-Williams also noted that she’s a “realist” who recognizes there’s still much to be done in this country in terms of race relations and equality. Even though she’s received the honor of delivering the invocation at the President’s inauguration–and being the first woman to do so, no less!—it seems that she’s not close to done fighting for causes in which she believes.