My Takeaway From Spending The U.S Election in Germany 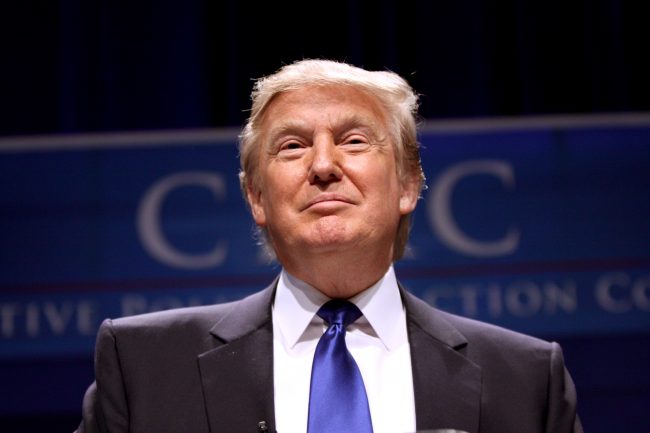 So … I was in Germany when Donald Trump won the election.

Just to be clear, it was not a pre-emptive Hillary-or-expatriate move but a total coincidence. I spent the better part of the last five months volunteer farming abroad and on November 8, I just happened to be on an organic goat farm in Baden-Württemberg.

Obviously everyone now has their own Election Day 2016 story and I don’t claim to offer any sort of definitive German perspective on U.S. politics since, you know, I’m not German. Nonetheless, I feel that my experience of spending the election as the sole American in a German community is worth sharing.

Forgive my naiveté, but perhaps my biggest surprise was how heavily the American election was featured in German news. I knew that German outlets offered more international coverage than American media, but I hadn’t realized just how much more. Angela Merkel occasionally pops up in American news, usually in the context of German-U.S. relations, and I was sort of expecting that the same would be true of Trump’s coverage in Germany.

Everyone I met knew about him. No one I met liked him.

A man at a pub brought up Trump as soon as he heard my heavily Americanized German. A customer at the farmer’s market where I worked asked me which presidential candidate I supported within seconds of realizing I was American. On election day, my host family was up at 5 AM watching the results come in and, though they weren’t nearly as upset as I was when Trump won, they needed no explanation as to why I wasn’t eating breakfast.

The next day, Trump’s victory was on the front page of the newspaper and, as far I could see (my German’s still pretty darn poor), there was no attempt to present the win in an unbiased light. It was unambiguously, as one article was titled, schlecht nachricht für Europa, bad news for Europe. 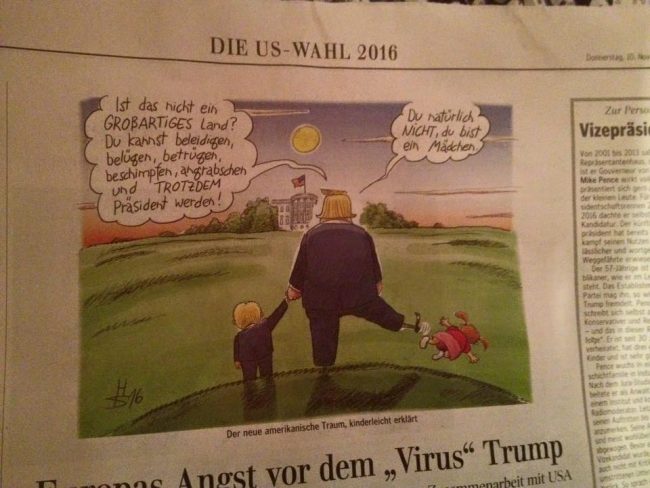 “Is this not a great country? You can insult, lie, deceive, swear & grope & still become president … Not you, obviously. You’re a girl.”

All that said, one major benefit of being outside the U.S. at the time of the election was the disquieting but grounding reminder that far-right political movements comparable to Trump’s are gaining popularity across Europe.

A woman I met at a hostel in Munich shared my distress at the U.S. election results but admitted that she’s more worried about the advancement of the right-wing Alternative for Germany (AFD) party and intends to move to Romania if an AFD candidate is elected chancellor. As scary as Trump’s impending presidency is, it’s only one piece of a growing global situation.

A friend in Leipzig told me that while she considers Trump to be a “racist populist, totally unfit [to be] president,” she’s less concerned with the presidency of a single man than with the mindset of the populace that elected him, and that she has similar feelings about Brexit and the AFD. However, she hopes that one positive outcome of all this might be that people would stop looking to governments to solve our problems and become more proactive as individuals.

“We all have to stay very aware of what’s happening and resist any racism even in the smallest detail …” she said. “There is no need to panic. But there is a lot of work to do.”