The Mary Sue Interview: Murder of a Cat‘s Fran Kranz (Plus Exclusive Clip!)

Kranz goes from zero to hero in this quirky detective parody. 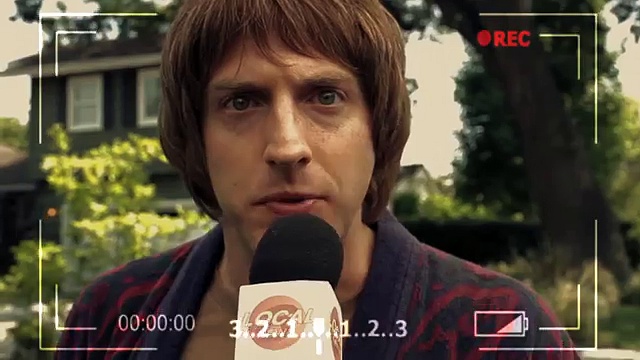 Fran Kranz has been a favorite of “nerds” since he first partnered with Joss Whedon in Dollhouse, Cabin in the Woods, and Much Ado About Nothing. Now, the rising star is in the midst of the Broadway revival of the classic American play You Can’t Take It With You as Tony, the film role that made Jimmy Stewart a star. Seems like the perfect fit for a soft-spoken but thoughtful actor like Kranz, who apologizes for taking a drink of water during an interview. We spoke about his leading role in the comedy Murder of a Cat as Clinton, a loser living in his mother’s basement with his cat Mouser and collection of handmade action figures. Clinton is an unlikable, anti-social jerk who mistreats everyone, including his poor mother, but also really loves his cat. When that cat is killed, Clinton determines he’s been murdered (insert Quincy line here) and is determined to solve the mystery. Kranz spoke with us about creating Clinton, and his alter-ego detective character in the very funny comedy.

Lesley Coffin (TMS): The film requires you to play two characters, one being the alter ego of the other. How was it playing and defining those distinct characters?

Fran Kranz: Well, it’s implicit in the story. Clinton creates the action figures and his favorite is Doghouse Riley, the detective. And he mentions running around and playing detective as a kid, so I had the idea that Clinton and Doghouse were always very closely knitted and never that far apart from each other. So it isn’t just an alter ego, it’s an alter ego that goes all the way back to childhood. So I didn’t think of them as two distinct characters as much as different sides of the same person, and Doghouse is kind of his confident, winning side. And it comes into full focus the closer he gets to solving the mystery. The more successful he is, the more Doghouse comes out with ease and shows all his colors. 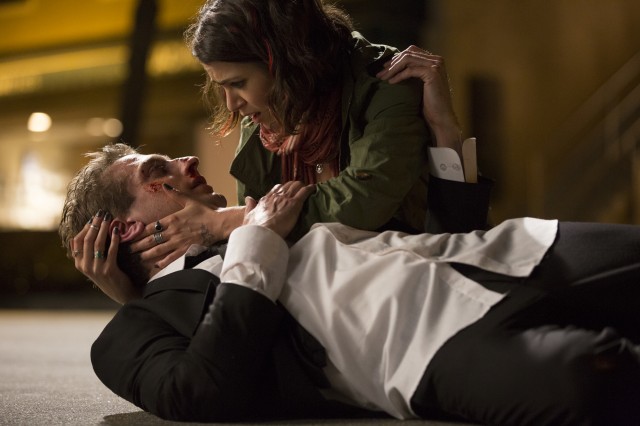 TMS: Watching the movie, it was almost like a comedic version of Tyler Durden from Fight Club.

Kranz: That’s a great example. I was thinking Dr. Jekyl and Mr. Hyde but that is a bad example. Tyler Durden is a good example of this kind of alter ego. It is sort of a better version of himself, the person he wishes he could be. And Clinton is also living in a very twisted version of his own reality. He has his own issues. But I didn’t look at it as two characters, always one in the same.

TMS: The way he takes on the role of Doghouse, changing his look and posture and voice, do you see Clinton as an actor?

Kranz: It kind of helps to think of the character as having this whole line of toys. He lives at home and doesn’t have any friends. Literally, his cat is his best friend. He’s his only friend. So you imagine he is someone in his own head a lot. The way he behaves on the street is so bizarre, but it is also kind ofthe reality of someone who doesn’t get out a lot. His poor behavior and outrage at the real world is the honest reaction of someone who doesn’t have a lot of experience in it. I love the fact that he wanders around in his bathrobe in broad daylight because it simply doesn’t occur to him.

A lot of his strange behavior is just his in experience and lack of life skills. Some of the scenes with Greta, Nikki Reed’s character, strike you the way a 12-year-old boy would behave around a pretty girl. So in a bizarre way, he’s more comfortable with people when he has a role to play. He can hang out with JK Simmons the Sherriff when he is playing a detective, easier than anyone else, because suddenly they are like peers. Clinton has no peers, he’s a weirdo. But he can hang out in the police car when he’s playing the role of Doghouse Riley, even though JK Simmons thinks he’s ridiculous. In Clinton’s mind, he’s kind of jiving with the guy. He comes out of his shell when he’s in character. 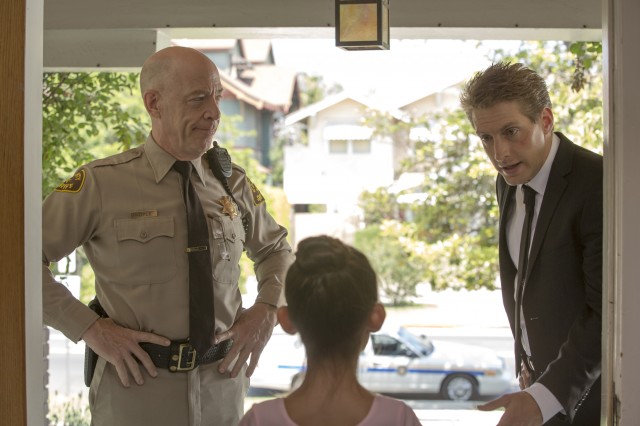 TMS: I know you and JK did [Murder of a Cat director] Gillian Greene’s short film together. What was it like working with again?

Kranz: We barely acted together in Gillian’s first short film, Fanboy. We are literally just in the same shot for all of two seconds. So I barely knew JK Simmons, but I’ve become very close with Gillian and Sam (Raimi, Gillian’s husband), so I was comfortable with JK right away, because he’s also close with them. But that is what is strange about acting. You’ll meet someone and 10 minutes later they’re your mom or you’re hopping into bed with them, which is the nature of the business. So you just have to embrace that weirdness of that, and it helps when you have someone as experienced as JK Simmons to work off of. The awkwardness of the business and acting, you get over that quickly when working with someone that solid. And there was no learning curve for us, because there was no time for it and there was no rehearsal really. But he’s a pro, so you just fall in line, unless you don’t and then you just look like a fool. But you get into it. He’s also, completely unflappable as one of those guys who is just a one-take wonder. And if he gets a direction, he will process it and execute it in one take. He’s that good.

TMS: You are pretty much in every scene of the movie and the character is challenging. Do you like come into a film knowing what you’ll do, or would rather the material feel as fresh as possible?

Kranz: It’s funny because I’m doing a play right now [You Can’t Take It With You on Broadway] and you have so much rehearsal time. Actually you don’t, you only have four weeks, but you rehearse the play so much in that time, it becomes muscle memory. I’ve done about a hundred performances of this one play on stage, and by now, it is such a well-oiled machine, even if I wanted to change something I think I would find it pretty difficult. My muscle memory is more powerful than my will, it is this really surreal feeling. And it is actually kind of scary because it is almost as if you’ve blacked out and then realize, “I just did a performance.”

While on a film, you need to know the character physically, something as basic as an accent, and framework of the character; but on a film you don’t want to have rehearsed too much, because you don’t know exactly what the director will want until you are filming the scene. Things change on set and in the editing room, so there is a requirement to give a range of takes, be open to interpretations, and be open, within reason, and always in character.

In that way it was kind of hard to do that in this film because there is that alter ego. So it was definitely a challenge to be consistent, especially when you’re shooting out of order. But you want to come in very loose, and we were very loose and playful on set. Actually, I think Gillian had a hard time reigning me in because I improvise a lot, and in general, I was always on the angry side of the scene. After all, Clinton’s best friend (the cat) had been killed, and I think comedy is best when it is taken seriously. So I really tried to embrace the outrage, and Gillian would have to come in and say, “We have that, dial it back, and find something else. Find his confidence, just give me more colors.” And she was right. I watch the film and see when the lid just comes off, but there are also the more reserved moments which work. 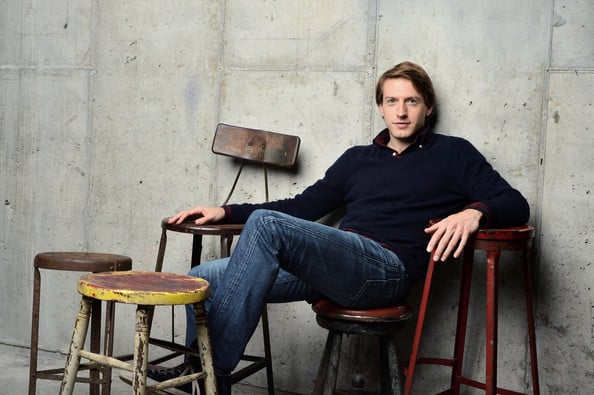 TMS: You mention accents, and I wanted to ask you about the voices you choose for the character; the manly voice you gave Doghouse Riley, and the almost pubescent voice you gave Clinton.

Kranz: Well, we talked about the voice. The writers said they wanted to make Chinatown in the suburbs. So I thought about Jack Nicholson as Jake in Chinatown and Elliot Gould as Philip Marlowe in The Long Goodbye. But another big influence for the writers was Ignatius Riley from Confederacy of Dunces, and obviously that is a book so there isn’t a voice. But he’s a man, I think he’s in his 40s, and yet he lives with his mom and he’s always whining. So Clinton in his purest form, at home, in the basement with his cat, is just an overgrown child so that is where his voice came from. I don’t think he sits around watching Chinatown, but we all know the detective character and hear it in our head, without having to have even have seen noir films. And there’s a hoarse coolness to that kind of character’s voice. And so I thought about that a lot. And Doghouse’s voice just got more and more defined, depending on the scene and how confident Clinton was. And ultimately at the end, during the climax, Clinton kind of transcends the character and his childish fantasy, and he takes on a whole new kind of voice. So that connection between voice and character are not linear, they are dependent on the emotions of the scene, but they do exist.

We have an exclusive clip from Murder of a Cat for you right here. Enjoy!