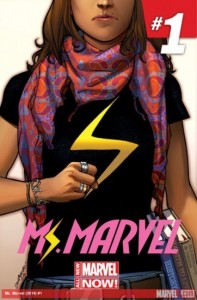 There’s been a lot of scrutiny of the character since the announcement, particularly because of her Muslim faith. Do you feel like there’s extra pressure to treat her as a representative for all Muslims?

“There’s a burden of representation that comes into play when there aren’t enough representatives of a certain group in popular culture. So the few ones that do exist come under increased scrutiny and pressure, because they’re expected to represent everybody. Obviously, you can’t do that with one character and you shouldn’t, because it would stifle the narrative and prevent them from becoming a fully-realized person. So I think in situations like that, you just have to tread lightly and trust your gut. Kamala is not a token anything in any way. She’s very much her own quirky, unique, wonderful person. She’s not a poster girl for her religion and she doesn’t fall into any neat little box.

If you put the shoe on the other foot and said we’re going to have one Christian character that represents all Christians, the ridiculousness would be obvious right away. Are you talking about white Methodists from Oklahoma? Are you talking about Anglicans in Africa, who are the fastest growing group of Christians on planet Earth? It’s patently impossible for a Muslim character to represent ‘all Muslims.'”—Wired has a preview of the new Ms. Marvel, in which the titular heroine is Muslim teen Kamala Khan. There’s also an interview with writer G. Willow Wilson. The whole thing’s a good read, but this answer is my favorite bit.