Catch up, then start picking up the monthlies from here on out. 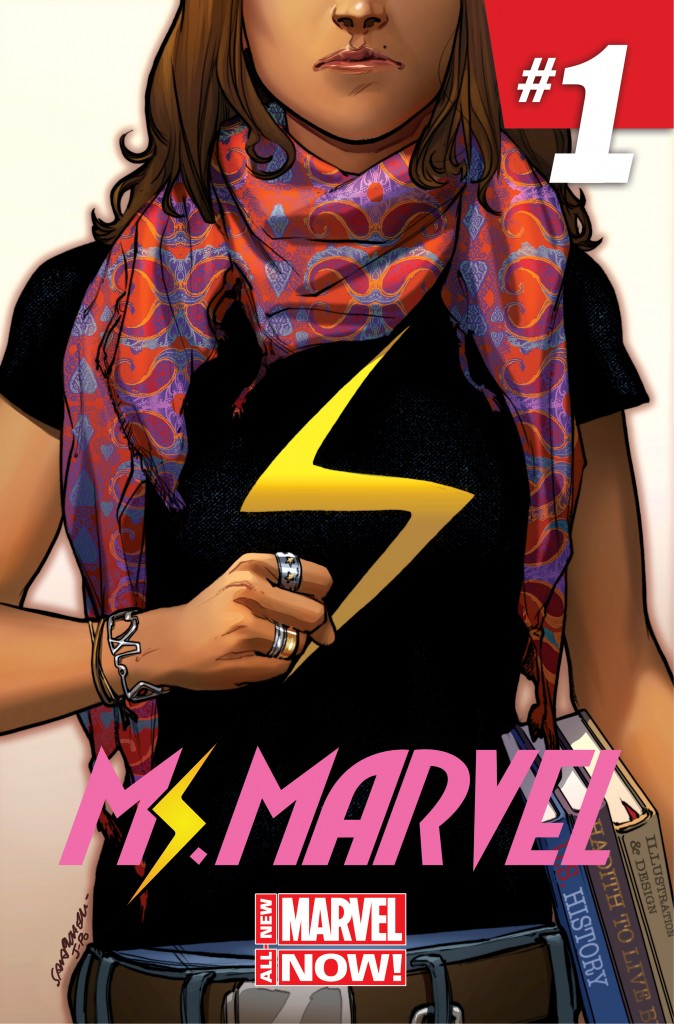 I’m a huge fan of the updated Ms. Marvel with Kamala Khan as the protagonist. Marvel has been hitting it out of the park with this comic, and even my forgetful 10-year-old daughter asks me repeatedly when the next issue is coming out. If you haven’t hopped on board yet – you really should. There’s no new issue out this month, so instead, here’s a spoiler filled comic catch-up of what’s been happening so far. Then you can start at #10, out December 17th!

The following obviously contains heavy spoilers for the first nine issues of the current run of Ms. Marvel.

During the ’80s and ’90s, Ms. Marvel was an on-again, off-again Marvel series; they didn’t seem to know what to do with it. It wasn’t bad by any means, but it was certainly patchy – though in the end it had a pretty good run. Upon the death of the previous Captain Marvel, the original Ms. Marvel (aka Carol Danvers) dropped her Ms. moniker and took up the vacated Captain handle. This left her old title up for grabs. Writer G. Willow Wilson and artist Adrian Alphona, working with editor Sana Amanat, stepped in to make that happen. Gasp, exposition!

Kamala Khan is a teenage girl living in the Bronx, a Muslim of Pakistani descent with overly-protective parents and an older brother that thinks he knows best. She’s a huge Carol Danvers fan, a member of the Carol Corps., and even writes fanfiction about Ms. Marvel and the Avengers. Wolverine is her idol. I’m betting she’s secretly into yaoi.

Kamala is an insecure, optimistic, and naive teenager who doesn’t quite fit in. One night she sneaks out to a party; but when she leaves early, she’s rewarded by stumbling into the mist from the Terrigan Bomb (something that activates dormant Inhuman genes – think instant mutantization). Kamala passes out and sees a vision of Ms. Marvel, Captain America with a goldfish on his shoulder, and (perhaps most charming of all) Iron Man holding a sloth with tiny wings. This vision asks her why she’s pretending to be something she isn’t (a party girl), and what she wants to do. She replies to the Ms. Marvel as part of the visio,n “I want to be you.”

Since it turns out Kamala is a descendant of the Inhumans, the Terrigan mist stimulates her latent super-powers, and Kamala awakens looking exactly like Carol Danvers. Dressed in the classic revealing Ms. Marvel costume (that apparently gives an epic wedgie), Kamala has to fight to control her new shape-shifting powers. While shifting between herself and Carol, Kamala manages to save a school friend from drowning. Now, she feels even more of a misfit, and must struggle to be true to herself and control her powers.

The series balances real life alongside Kamala’s fantastical new powers, and it does it well. Worried about their daughter’s sudden changes in behaviour, her parents insist that Kamala speaks to Sheikh Abdullah, who is the head of their mosque. What follows isn’t the expected teenage embracing or rejection of religion, but a subtle dialogue between two people who are trying to understand each other. Kamala explains that she’s trying to help people, which is why she’s breaking curfew and sneaking about.

Abdullah doesn’t admonish her, but asks that she finds a teacher so she can help others better, with ‘courage, strength, honesty, compassion and self respect.’ Religion is well-handled in Ms. Marvel, as it’s neither disrespected nor battered about the readers’ head; instead, it fits organically into Kamala’s life. The series is wacky, fluffy and light; eminently digestible, but it’s not frivolous, as it has heart.

After preventing a convenience store robbery where her best friend Bruno works, Kamala is shot, and as she heals she reveals that to Bruno that she’s Ms. Marvel. Kamala is caught without a disguise and unable to shapeshift, as her healing temporarily uses up her powers, so she dons a sleep-mask with two eye-holes poked into it before she gets questioned by a New Jersey police officer. Foreshadowing! Kamala then backtracks to a shack where the robber is hiding out.

Our girl discovers that teenagers have been going missing, and some of them are in the shack. Behind the plot of the missing kids is a human-sized cockatiel known as the Inventor. This arc, like the series as a whole, starts out light and funny as Kamala bashes small robots and saves people around New Jersey. She’s not very aware of the world she’s entered into; to her, it’s still all fanfiction, and she thinks that she can solve all problems with her giant fists and heaps of optimism. It isn’t until she starts hunting the Inventor and refuses to stop that her world (and the story) start to expand. 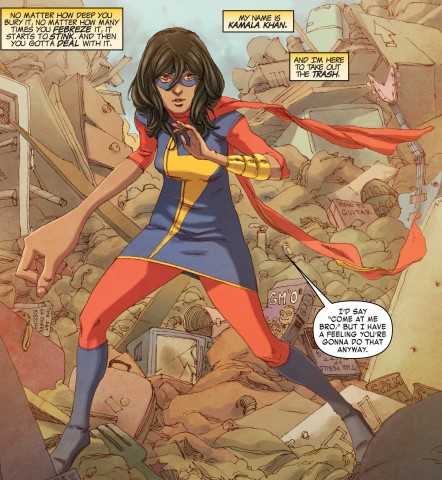 Kamala’s powers are not the same as Carol’s; she doesn’t seem to be as hard a hitter. Carol can stand toe-to-toe with Thor or the Hulk, a tier one badass of the Marvel Universe. Kamala can’t (as yet); she doesn’t know how far her powers extend, she’s still learning, and so are we. She’s a polymorph that can change shape and size, including perfect imitations of other people. She also has increased strength and a healing factor. Her healing factor is energy hungry, though, and will only work if she’s in her true form; healing while shapeshifting is too much for her, but it’s still enough that it would make the healing-stripped Wolverine jealous. Oh and speaking of the heavy boned devil…

After hearing growling coming from a hole in a road, Kamala heads down into the sewers, where she meets Wolverine (who is also looking for a missing teenager). Kamala’s overjoyed to be fighting alongside a personal hero and someone she calls ‘a short angry man that punches stuff.’ Wolverine was coincidentally first in her fantasy team-up list. Kamala’s worldview shifts again as Logan introduces realism into the comic; he tells Kamala you can’t help people without hurting other people because ‘the pain’s gotta go somewhere.’ In a darker turn, it turns out the missing kids are being used as batteries to power the Inventor’s machines; when the battery runs out, no more teenager. As the unlikely team-up ends, Logan finds out where Kamala’s powers came from and contacts The Avengers. You’ve probably heard of them, they have a Hulk.

The call comes through to Medusa, Queen of the Inhumans, who discusses the appearance of Kamala’s powers with with Captain America. Because of Wolverine’s respect for the young woman that just won’t quit, Medusa decides to not take Kamala away from New Jersey for training, but instead opts to send her help in the form of her faithful pet. Lockjaw is all kinds of cute, a couch-sized bulldog with a small aerial coming out of his head, and a member of the Pet Avengers. Oh and he can teleport!

This last fact is useful, as it’s an excuse to get Kamala into and out of all kinds of trouble; but not before the delightfully naive Kamala pleads with her parents about Lockjaw. ‘So…he followed me home. Ammi, Abu, can I keep him?’ They relent – as long as he lives in the back garden, which really isn’t going to stop Lockjaw from going where he wants. Seriously though, with a teleporting intelligent dog, how would you stop him from doing what he wanted anyway? Clearly no pee mats required for Lockjaw.

Kamala follows the trail of another missing teenager and, using teleportation, Lockjaw leads her to one of the villainous Inventor’s hideouts. She’s attacked and, although she struggles to fight a robot larger than her, she defeats it and frees the teenage power source inside. Instead of thanking her, the teen asks her to stop as he was a ‘part of it.’ What he is a part of isn’t revealed yet. They warp the kid to the nearest hospital, but Kamala isn’t aware of a tiny robot stowaway that’s climbed in her bag, and as she makes it to regular school, the wee robot’s beacon brings the pain back with her.

As class gets underway, a huge robot smashes through the side of the school and the realism that Wolverine mentioned hits Kamala hard – literally. She’s hit so hard that her healing factor uses up almost all her juice; though it saves her life, it leaves her with barely anything left to fight the mega robot. She realises for the first time that this isn’t a game, as the Inventor has been upping the stakes with each encounter, and now she’s accidentally put her school in danger.

Fighting on low power, Kamala is unable to shapeshift into her Ms. Marvel disguise, and one of the attending police officers recognizes that she’s Ms. Marvel even though she’s not in costume. Yes, that same officer from earlier that questioned Kamala back when she was in a sleep-mask. Using the last of her strength, Kamala destroys the robot with a headbutt and passes out, her healing factor all used up. Bruno rushes to her side, but Medusa warps in with Lockjaw and teleports them all to Attilan, the city of the Inhumans in the Hudson River. As Kamala recovers, she learns that the more often she heals, the less she’ll be able to change shape. Kamala again insists on dealing with the Inventor herself, and Lockjaw warps Kamala and Bruno back to New Jersey.

The sloth with wings reappears in issue #9, for no apparent reason, and quite frankly this is now my favourite Marvel Universe character. I shall call her Ms. Mossy and I await her own comic – are you reading this Marvel? Kamala stakes out where the Inventor is keeping kids, and stops another harvest of kid-based batteries from taking place – only to be told that the kids are all volunteers and there by choice

Which officially brings you up to speed with the end of issue #9! This really is one of the most fun and progressive mainstream comics out there. The art is exaggerated, funny, and great, the colours more subtle than standard comic fare. So far I’ve loved it. Give it a try when issue #10 comes out on December 17th. Any questions? I’ll address them in the comments!

Marcy (@marcyjcook) is an immigrant trans woman and writer. This includes Transcanuck.com, a website dedicated to informing and helping trans Canadians. She also has a nerd job, too many cats, is a part time volunteer sex educator and has an ongoing sordid love affair with Lego. Those last two are not related…probably.