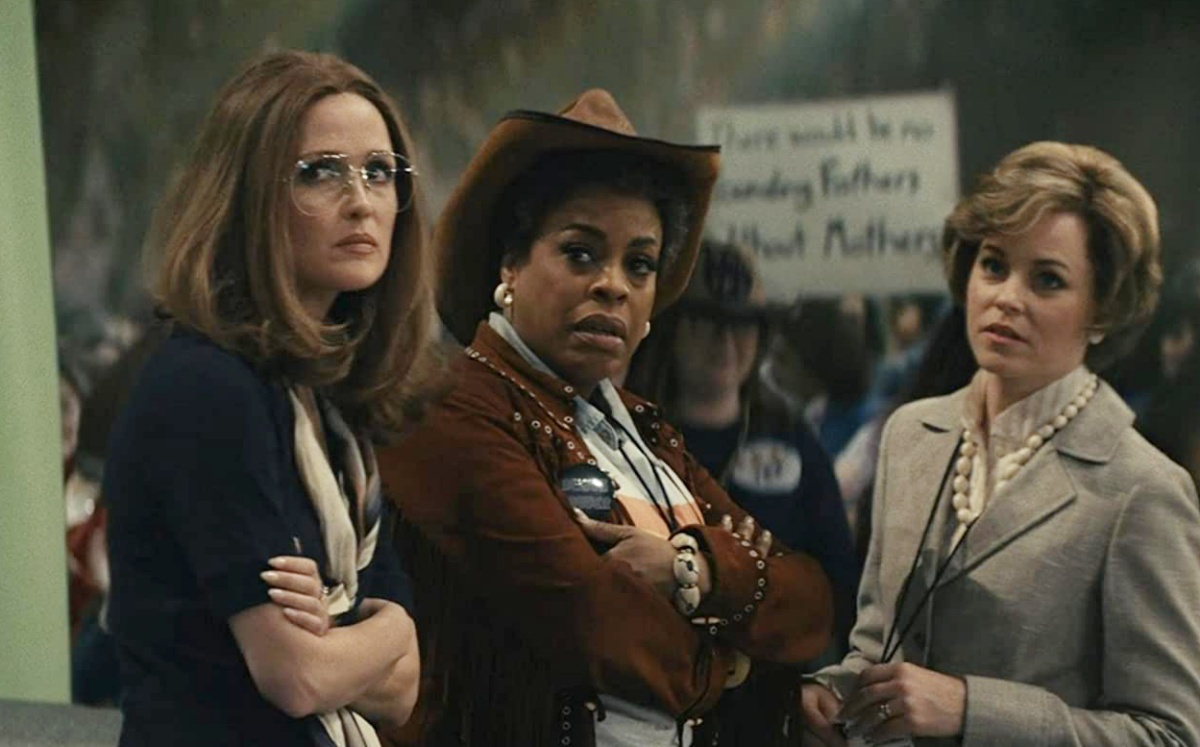 Before I begin anything, I will say that Hulu’s Mrs. America is an amazing show. It is well-acted, well-paced, and helps illustrate a lot of things in history I was aware of but had never seen depicted onscreen—highlighting the death of the bipartisan feminist movement of the ’70s and the rise of the religious right. Yet, despite the majestic work that Cate Blanchett does in it, I find myself deeply frustrated with the fact that the main character of this series is Phyllis Schlafly.

“Having Phyllis as the way in made telling that story really easy. She is the main character of that story,” showrunner Dahvi Waller explained during a very interesting interview with Slate.

Waller went on to say that getting to explore this period of history fostered creativity but was also restrictive, because the show had to stick closely to facts, and that meant certain characters were pushed to the forefront:

I knew that I wanted to tell the story of the death of moderate Republicanism and certainly pro-choice Republicans, so that brought Jill Ruckelshaus, who was one of the Republican founding members, into the development process. The fact that Brenda Feigen Fasteau debated Phyllis Schlafly—that was the other way I chose my characters: Who actually interacted with Phyllis? I guess some people might have created a fictional debate between Gloria Steinem and Phyllis Schlafly because it makes for great television. But I really wanted to follow the true story.

As a result, despite one episode “focused” around Shirley Chisholm, the reality is, as Waller put it, there were “no black feminists who debated Phyllis Schlafly, no women of color. So there are a lot of amazing women who, if I were doing a series only about the women’s movement, would be included.”

While I understand this viewpoint, it is still disappointing. Waller is aware that by not heavily including women of color, lesbians, and other queer women, she is perpetuating the same limited perspective that the wave of feminism depicted has always been criticized for. The show absolutely calls out those mistakes in its storytelling, but even within that acknowledgment, the characters who get the most screen time, character exploration, and focus are the white, straight characters: Gloria Steinem, Betty Friedan, Bella Abzug, and of course, Phyllis Schlafly.

Even when we get Gloria Steinem and Ms. magazine’s story, we don’t even get to see Dorothy Pitman Hughes show up. She was the African-American co-founder of Ms., yet they found time to squeeze in a pointless Ruth Bader Ginsburg cameo?

When asked about whether the show is “too sympathetic” towards Schlafly, Waller responds: “I wanted to humanize everyone. I think there is a real difference between humanizing a character and making them sympathetic.” In this, I do agree with Waller. The show makes Schlafly’s terrible qualities very clear, as well as the handful of redeeming ones she has, and I’m not really interested in making her a one-note character. Yet, I do feel the desire to unpack the complexities of ultra-conservative women is overdone.

Waller explains the contradictory aspects of Schlafly’s fight against the ERA in comparison to her own political power:

What makes a woman who wants to be part of a very traditional boys club suddenly shift to women’s issues? That mystery was something I was really interested in. She has these characteristics that we generally associate with strong-willed feminist women and yet she’s fighting so hard to keep women oppressed, and that disconnect, there’s a lot of drama there.

Is it that strange? Is it that disconnecting? Maybe for me, as a Black queer woman, I don’t find the unpacking of women like Schlafly that interesting. There have always been, throughout history, a section of women who supported the status quo because they were secure in their place in it. We had women’s groups that were against the suffragists because they didn’t think women needed the vote.

I respect the vision of Waller’s show and my criticism is not a call to not watch it. However, I just think it is fair to point out that by focusing the series largely around Schlafly, so that only characters who were in her orbit can have significant amounts of screen time, it feels disappointing.

I’m glad that Mrs. America exists and will prompt more people to explore this period of history. I would just ask for people to be challenged to not explore beyond women who are controversial because they happen to be conservative and women. As much as it pains me to have to tell y’all this … it’s not that special.