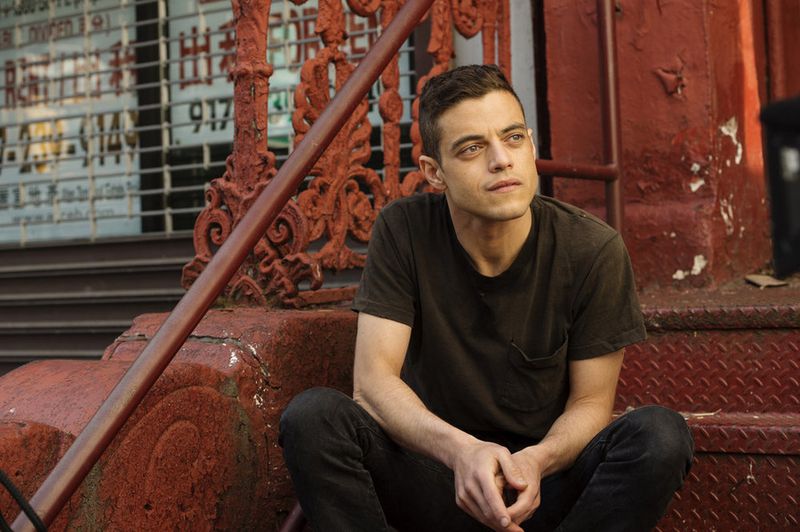 [Editor’s Note: We’re obviously late to the game with this, but after receiving requests from readers, we’re excited to be able to start sharing some Mr.Robot recaps, beginning with last week’s episode. To catch up on previous episodes, you can read Jamie’s recaps over on Black Girl Nerds.]

The opening scene begins with the ambient sounds of sirens in NYC and we see Elliot walking down the streets of Chinatown with his trusty steed: his hoodie. Elliot discovers that apartment 4D is open and finds Shayla inside. Elliot grinds his morphine into a bowl as a long-haired Shayla enters his apartment.

It is at this point that clearly this is a flash back as both Shayla is alive and Elliott is back on narcotics. Shayla asks for water and places the black betta fish given to her by her niece. The betta fish is important, because we saw shots of it in an earlier episode which was voiced by actor Keith David. The betta, in my opinion, is a metaphor for Elliot in some capacity. These are fish that can only live in solitude due to its animosity towards their own kind.

Shayla and Elliot chat in front of his East Broadway building about drugs, music and people.

Shayla brings up music and concerts and Elliot mentions how he hates concerts and people. It’s at this moment where Shayla and Elliot develops a connection during their first meeting. Both parties learn each other’s name for the first time. Shayla tells Elliot to keep the fish.

In the following scene Elliot apologizes to us for not talking to us for a month. We are now back to the present day as he recollects the passing of Shayla and feels guilty for getting used to her being absent.

Elliot is in Krista’s office. Krista gives him a release form to sign to relinquish him as a patient. Elliot signs the release and tells Krista to clean her sockets.

We transition over to Angela, who has a meeting with Antara Nayar and the attorneys representing the Washington Township Case. Nayar works to strikes a deal to meet with Colby and Angela off-the-record. The attorneys mull over the offer and advise they will get back to her.

Next we see Elliot with Gideon at E-Corp (aka Evil Corp). Gideon offers Elliot some bereavement time off to which Elliot refuses. Gideon advises not to allow Shayla’s death to close him off entirely. Elliot talks to us again and uses the analogy of source code data programming with human beings. Elliot says as a kid he would modify and manipulate code by ripping off sites he liked, which is how he became a web designer.

“Any source. What if we had that for people? Would people really want to see?”

Next we move to Mr. Robot and Darlene in a local bar. He reads headlines from the paper to Darlene on what the media is saying about fsociety. Mr. Robot wants the Dark Army back. Mr. Robot wants to walk to “White Rose” who at this time remains anonymous to us. Darlene annoyingly asks a sleeping barpatron if he’s “White Rose” in an attempt to condescend Mr. Robot’s efforts to track him down. Mr.Robot tells Darlene he as a plan in motion.

Back to Elliot’s apartment where he burns a CD in Shayla’s memory titled The Cure Disintegration, the classic 80s rock song. Elliot takes the hard drive from his computer, inserts it into the microwave and turns it on. Elliot’s dog flipper sees what looks like a chip from the hard drive and eats it.

We see Tyrell in a meeting over at E-Corp going over capital budgets. The conversation spirals downward from financials to homoeroticism and one of the employees makes a remark about executives going gay for pay, Tyrell is incensed by the conversation and immediately yells “you’re fired”!

“I’ll make sure you all receive the minimal severance packages”

“Mr Weller, I don’t understand, what did we do?”

Attorney Nayar and Angela discussed the situation with the state’s attorney. Nayar said that Colby’s lawyers want total immunity with the caveat that Angela go in alone. Angela now has to embark on a quest to get to the truth of what happened alone in a room with Colby.

We return back to Mr. Robot and Romero in a room where it appears to be a hydroponics room used for growing weed. Romero tells Mr. Robot that he’s out and that he has new clients dependent upon them. Romero has a new development formula to manufacture TLC in liquids and now he wants to go on his own. Mr Robot becomes indignant and says he’s crazy and not to be messed with. He puts a gun to Romero’s head and threatens to him show how much of a loose cannon he can potentially be.

Colby and Angela meet in his office over a cup of tea. Colby immediately asks Angela “how much do you want?” and assumes Angela’s intentions are purely financial. Angela tells him she has information that can help him if he agrees to testify against the executives who covered up the illegal dumping of waste, she will testify that she broke chain of custody with the data file central to his case. Colby condescends to Angela with a sexually vulgar statement about fellatio and says he is only willing to answer her question if she performs that sexual act on him. Angela sits quietly defeated, and then tells him if he doesn’t take the deal, people will still think he is guilty and lose everyone’s respect.

Elliot is at the vet with his dog, Flipper. X-Rays show the chip is still in her belly. The vet says it should pass and to crate Flipper for the next few days.

Angela gets a call from Nayar that Colby’s lawyers want to talk.

Darlene meets with Cisco, at the park. Cisco asks how long she knew that she joined his IP with his handle. Cisco tells Darlene he never wants to see her again.

Angela meets with Colby and he says that he is going to draw up the paperwork and accept the deal.

Colby wants to know what does Angela get out of this and why she’s letting him go free. Colby then explains what he was doing the day of the Washington Township scandal and that he was casually having a shrimp cocktail dinner and had a scotch and it was raining that day.

“So you were drink, eating shrimp cocktail, and it was raining when decided my mother should die?

“That’s why. So people like you won’t keep sitting in rooms together”

Angela reveals to Colby that he inadvertently was responsible for her mother’s death.

Scott Knowles was just promoted to CTO of E-Corp. Tyrell, who wanted the position, is there with his wife. Tyrell approaches Scott’s wife, who appears to have had a bit of history with Tyrell, enough to where she’s comfortable enough to leave with Tyrell on the rooftop of the building where the party is located.

Angela meets with Gideon, and it’s clear Gideon is upset with her for moving forward with testifying in the case. Gideon says once the confession goes public, the company will go under and no one will want to do business with Allsafe. Gideon tells Angela that everyone will be affected by her decision.

[Trigger warning for violence against women] Back at the rooftop, Scott’s wife Sharon meets with Tyrell. Sharon and Tyrell engage in a kiss and begin making out on the rooftop. What appears to be an intense scene of intimacy quickly turns into act of homicide when Tyrell chokes Sharon to death and leaves her lifeless body on the rooftop.

Fsociety member Trenton meets with Darlene, who tells her she has connected with White Rose. Trenton asks what part of their scheme motivates her. Trenton reveals her motivation for what she does, which is living a debt-free life. Darlene convinces Trenton to ally with her and see it through.

Cisco meets with Ollie and convinces him to cooperate or his name could be leaked in connection with Angela.

“I don’t just hack you Krista, I hack everyone.” – Elliot Alderson