3 out of 5 Hollywood endings. 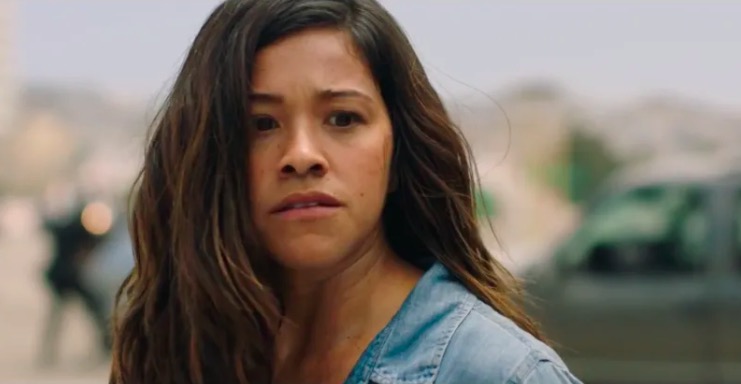 Miss Bala is about the drug trade along the Mexican/American border, told not through a cartel or law enforcement perspective, but from a spooked makeup artist from L.A. named Gloria (Gina Rodriguez). It’s a Hollywood-style remake of the Mexican original from 2011 and mostly follows the same plot, though this time, the story has a female director, Catherine Hardwicke, who wowed with 2003’s Thirteen.

Gloria travels to Tijuana to help her best friend, Suzu (Cristina Rodlo), compete in a beauty pageant. They go to a nightclub to celebrate, and that’s when Gloria’s carefree trip becomes a nightmare. She’s a witness to a drug-related mass shooting and attempted assassination. She initially escapes, but Suzu goes missing. As Gloria searches for her, she’s turned over to the Los Estrellas cartel by a corrupt cop.

She’s kidnapped and terrorized, and her American passport is as attractive to Los Estrellas as is her not being able to be a witness against them. She’s recruited against her will to work for them. Still concerned with finding Suzu, she escapes and tries to go back to law enforcement—this time, the DEA. However, the DEA has no intention of helping her, and they also kidnap her. She needs to do what they say—go back and inform them on the cartel’s drug activities—or she’s going to prison.

The film has no one clearly defined “bad guy” because all the guys are bad. Our heroine finds herself surrounded by men. They’re liars, drug dealers, murderers, rapists, kidnappers, and indifferent to vulnerable women in need of help. There’s no real difference between how Gloria is treated by the cartel and the cops. Both just want to use her against her will and only care about her safety as it relates to getting them closer to their respective goals.

For someone so ill-equipped to be a drug mule/mole, it’s shocking how much both Los Estrellas and the DEA begin to immediately rely on her to accomplish tasks. Despite that reliance, her survival is all luck.

Gina Rodriguez is the anchor of the movie, and she’s only fine. Her performance often lacks depth, which impacts the whole movie, as she’s the person given the most screen time. It comes off as rather external and surface-level. The most intriguing performance is courtesy of Ismael Cruz Córdova, as cartel leader Lino. He does demonstrate some emotional conflict under the surface, and gives a glimpse of different motivations and desires. He’s the least one-note of all the characters.

For an action movie, it’s a bit light on action. There’s a few shootouts, a lot which focus on Gloria’s scared face, and no hand-to-hand combat. It feels like a bit of a letdown. It is welcome, though, that most of the violence against women happens offscreen and isn’t used to make it a sensationalized, lurid movie. There are a lot of “creepy” moments between Lino and Gloria, which are full of tension, like something untoward might happen at any moment, but thankfully, nothing does.

Then, there’s the plot point involving the beauty pageant, which has Gloria wearing gorgeous gowns. Since, as a kidnapping victim, mostly everything she wears doesn’t belong to her, it’s very convenient how perfectly everything fits, especially the formal wear. But it does all look great, so kudos to costume designer Graciela Mazón.

The final moments of the movie are the biggest change from the original, and require the biggest suspension of disbelief. It’s almost a joke, where nothing makes sense and there’s no consequences. There’s serious issues like PTSD and sexual trauma, and legal ramifications, that are not addressed in any way, as if in this world, those things don’t exist. Instead, the movie makes a ludicrous stretch to have a “happy ending.”

Overall, the film is no more than adequate, which unfortunately feels like a disappointment, given its potential. It’s a shame that it never comes together.