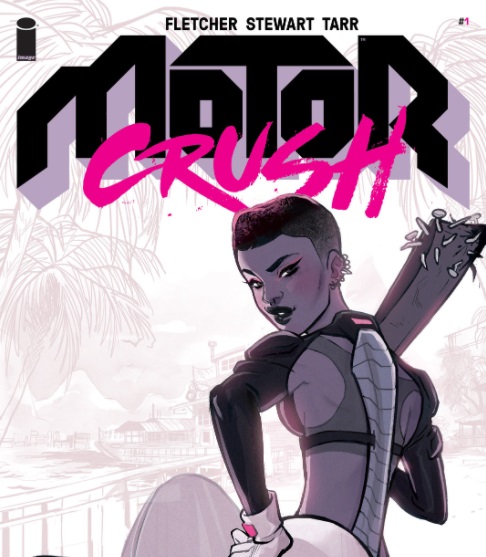 Superstar Batgirl creative team Brenden Fletcher, Cameron Stewart and Babs Tarr (mistress of the art of babes on motorbikes) have made a statement with their new gorgeously glowing, candy-pink sci-fi action book Motor Crush: “…the soul is but a principle of motion…”

Wait, no, that was early-eighteenth century French philosopher Julien Offroy de la Mettrie who said that. But, hey, it’s a mistake anyone could make! Because the idea is not only embedded into Motor Crush, but for a book that otherwise wears its influences on its sleeve (shoutout to Akira!), its philosophical subtext is the very thing that sets Motor Crush apart from other sci-fi. (Spoilers follow!)

In an only slightly more futuristic world than our own, moto racing is the sport. And Domino Swift is the rising talent on the World Grand Prix circuit. She also happens to be an established badass in the violent underground racing scene, where street gangs vie to win phials of a performance enhancing “machine narcotic” known as Crush, a drug that pushes engines to their limits to achieve top speeds and win races. 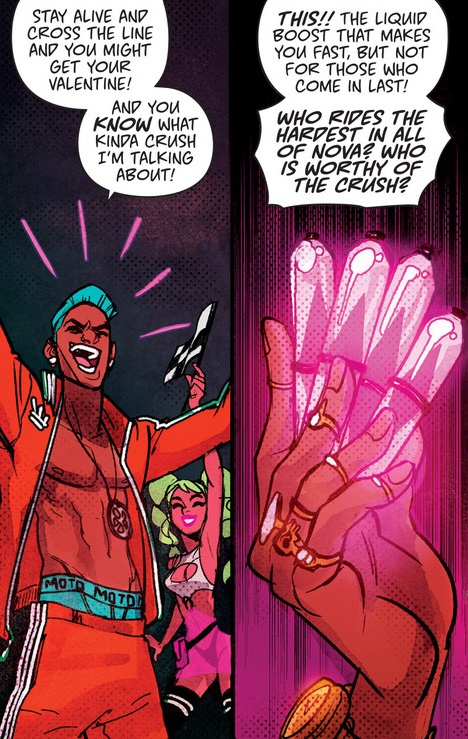 The first issue leaves a lot of questions surrounding Crush unanswered. How exactly does it work on machines? How is it administered to them? What does the drug do to enhance speed and performance? How do the bikes become addicted to Crush, the way a human being can become addicted to a narcotic? For a substance specifically described as a machine narcotic, we see very little of the way Crush operates on machines in the story.

What we do see, however, is the way Crush operates on human beings. Domino takes frequent puffs from an inhaler fitted with doses of the drug, despite the fact that Crush is a banned substance for World Grand Prix competitors, for reasons made clear when a racer’s bike explodes from an overdose. But Domino uses controlled amounts of Crush, hiding both her large stash and her use of it from her father and their friend, Lan. When Lan gets mixed up with the people who manufacture and distribute Crush, we get another glimpse of just how dangerous the drug can be.

Plenty of sci-fi explores metaphysical questions in stories about machines with AI that mimic humanity, a futuristic take on Cartesian duality; “I think, therefore I am.” The metaphysical questions of Motor Crush are more somatic. Limits? What are limits? When an addicted bike needs a hit of Crush, it begins to shake. When a bike is overdosed, it explodes. And what of the people who take Crush addiction too far? Yeah…they suffer similar physiological consequences.

But this isn’t just an anti-drug PSA. By conflating motorcycles and human beings using Crush, Stewart, Fletcher, and Tarr imply that human beings are essentially complex machines. They cannot transcend their limits just because they think they can, or think they should, or just really, really want to.

Of course, a significant difference between people and machines is that a damaged bike is more easily fixed than, say, a mutilated body. Herein lies the central conflict in Motor Crush. It’s a book about speed and danger, which also makes it a book about limits and consequences. Human bodies may be complex machines, and Domino Swift may be a certified tough-girl, but a bike pushed past its limits can be rebuilt to speed another day. A human being, not so much. And when someone has as much at stake as Domino clearly does, the lengths she’ll go to push her limits will continue to make an undoubtedly good story.

Tia Vasiliou is a digital editor at comiXology and co-host of the weekly podcast, The ComiXologist, where she also name drops philosophers to convince you to read her favorite comics.