Motion-Controlled Wings Powered by Wiimote and Smartphone | The Mary Sue 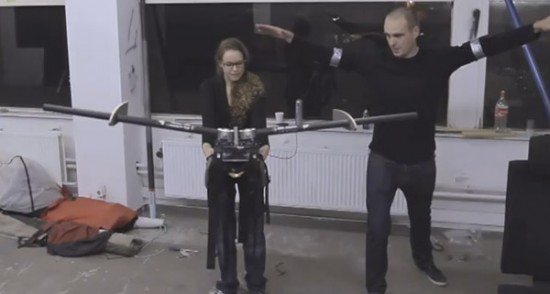 When we earthbound humans finally discovered the secret of flight, it was because we gave up trying to be birds and used our own, albeit a little boring, fixed-wing approach. It’s worth noting, however, that we can still make giant metal boats fly. That’s not enough for Dutch mechanical engineer Jarnos Smeets, as evidence by his Human Birdwings project. As part of his plan to spit in the face of evolution, he’s mechanically engineered himself a set of wings that will flap along with his arms by cramming together parts of a Wiimote, an HTC Wildfire S, and he’s holding them together with a heaping serving of software and a couple of servos.

So far, the rig allows him to flap his wings and see another pair of unfeathered, mechanical wings flap in unison. You know, everyone’s greatest dream. In time though, there’s no telling what he could do with this technology. Probably not use it to actually fly, since prosthetic wings have not worked out well, historically, but he might be able to use it to create some kind of motion controlled bird robot. That would still be a really, really cool way to live vicariously.