Review: Mother’s Day (the Movie) Is Not an Acceptable Gift

Review: Mother’s Day (the Movie) Is Not an Acceptable Gift 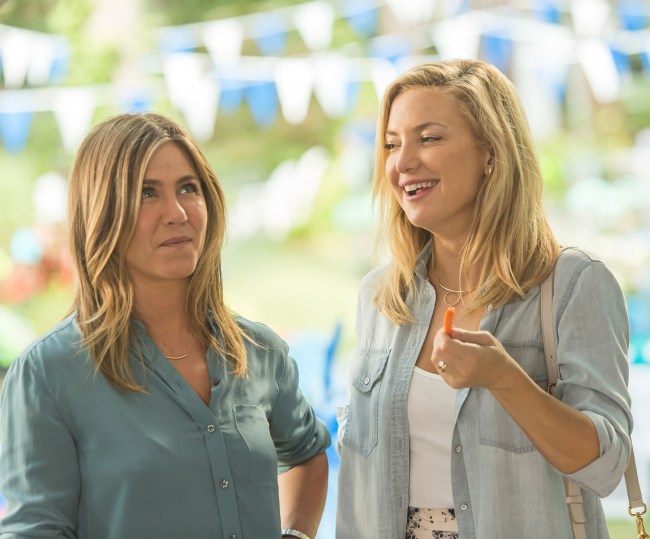 This weekend, the biggest cinematic franchise in history will put yet another installment notch on their belt. Basically, Captain America: Civil War is expected to take number one for at least a couple of weeks, but knowing more than a few people who will not be venturing to theaters to see that movie (let’s call them “my parents”), I did have to issue a warning to my mother in case she planned a movie night out with friends or her sisters this holiday weekend: If you’re going to see something for Mother’s Day … don’t see Mother’s Day.

Recently, Garry Marshall has started his own mini-movie franchise with holiday movies, clearly inspired by the modern-day Christmas classic Love Actually (comparisons stop there). Unlike his other two installments, Valentine’s Day and New Year’s Eve (even as plane movies, they’re hard to watch), Mother’s Day breaks the mold—a little. This one takes place over multiple days (I think a week, but I could be wrong about that) and focuses on basically three stories (maybe four, depending on how you divide things up).

There’s Kate Hudson, who hasn’t spoken to her bigoted mother (Margo Martindale) for years after dating an Indian man. Her sister (Sarah Chalke) still talks to her parents, despite being gay and keeping that part of her life secret, and when Hudson tries to make amends, the racist parents return and find out she married that Indian man (played by Aasif Mandvi). Jennifer Aniston’s divorced from a nice guy played by Timothy Olyphant (although, he’s not that nice when you really think about it—surprise), who marries a younger woman (Shay Mitchell). Aniston perpetually sees a romantic possibility in the form of a recent widower played by Jason Sudeikis, and then there’s a young mother (Britt Robertson) resistant to marrying her stand-up comedian boyfriend—not because she has radical ideas about marriage or something, but because she has abandonment issues because she was adopted. I’m not saying that’s impossible or ridiculous, but the out-of-date ideas this movie has about things like marriage and adoption stand out.

Sadly, none of these individual “stories” are funny or have much of an emotional core to anchor them, and with the exception of some cliché possibilities with the Jennifer Aniston/Jason Sudeikis’s storyline, it would be hard to imagine even one of these stories being stretched to be even one compelling feature film. Despite cutting the stories from his other films down more than half, Marshall and his 4 writers (only Monster-in-Law screenwriter Anya Kochoff has a previous writing credit), there is a shocking lack of character development for any of the actors to draw inspiration.

There’s something sad in that, despite being one of the few films about women over the age of 35, this is the type of movie they’re given, and the alarming lack of diversity on display stands out. And I don’t just mean the lack of racial diversity, but its shocking lack of understanding or interest in the variety of lifestyles, economics, and families they could have drawn from to show examples of modern motherhood. They talk of how difficult it is to be mothers, but none of them seem to really be struggling with that aspect of their life (Aniston’s character causes most of her problems), with the exception of loving-but-wounded father Sudeikis. Part of the reason I was baffled by the trailer when it arrived was the shock of seeing SNL former cast member Sudeikis in this movie. It felt almost like he’d made a Funny or Die trailer about Marshall’s predictable and lazy formula.

Marshall’s roots are in sitcoms, and I don’t think that’s ever been more apparent than in this movie. There were moments when I was pretty sure Marshall had the actors pause for a laugh, not to mention staging terrible stand-up at a club so we could get on-screen laughter. While TV is improving with cinematic influence, the reversal in using sitcom conventions in film has a real ick factor, and while I’ve heard some people call this nothing more than a Hallmark movie … that’s not really fair to Hallmark movies. There are a lot of Hallmark movies better than this movie. In fact, I like a Hallmark movie with a very similar structure called The Wedding Dress. This would be lucky to be part of the Hallmark Hall of Fame. No, Mother’s Day is Love Boat quality stuff.

The fact that Garry Marshall has evaded the law enforcement in charge of movie jail for this long leaves me baffled. Nothing ever seems to stick to this guy! This is the director of Exit to Eden, Georgia Rule, Valentine’s Day, and New Year’s Eve. His track record for making good movies certainly isn’t great, but he just keeps getting movies greenlit and his celebrity friends to star in them. Meanwhile, his sister, Penny Marshall (who I think had two lines in this movie), hasn’t directed a movie in 15 years! And all that wouldn’t be so bad if the movie didn’t have the stink of feeling like a cynical attempt to cash in.

As much as people might call Mother’s Day a Hallmark holiday or just a way for flower companies to get money, I think of it like Valentine’s Day (another holiday Marshall tried to RUIN). The day is what you (and your family) make it, and ultimately, it’s nice to do nice things for people you love. The people behind this movie haven’t made this to be a love letter to moms everywhere; they’re trying to steal moms’ money through marketing. I don’t see affection, or understanding, or even affectionate amusement towards mothers in this movie. I don’t even see mothers I recognize. If you’re taking a mom to a movie for Mother’s Day (or taking yourself), and want a comedy to celebrate motherhood, see The Meddler. She’ll appreciate it.